Attorney General Sessions’ Testimony To Senate Panel Will Be Public 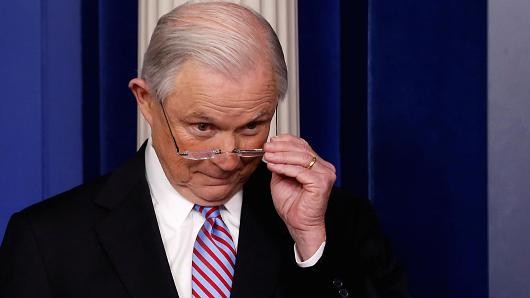 When Attorney General Jeff Sessions testifies before the Senate Intelligence Committee Tuesday, it will be in a hearing that’s open to the public. A Justice Department spokeswoman tells NPR that Sessions requested it be public.

The hearing in the Hart Senate Office Building is scheduled to begin at 2:30 p.m. ET Tuesday afternoon.

“The Attorney General has requested that this hearing be public. He believes it is important for the American people to hear the truth directly from him and looks forward to answering the committee’s questions tomorrow,” said spokeswoman Sarah Isgur Flores, in a statement relayed by NPR’s Carrie Johnson.

When it was first scheduled, the hearing was part of the annual budget appropriations process. But senators on the committee are expected to question Sessions about his meetings with Russians.