Are your parents hesitant to get the COVID-19 vaccine? Yeah, mine too 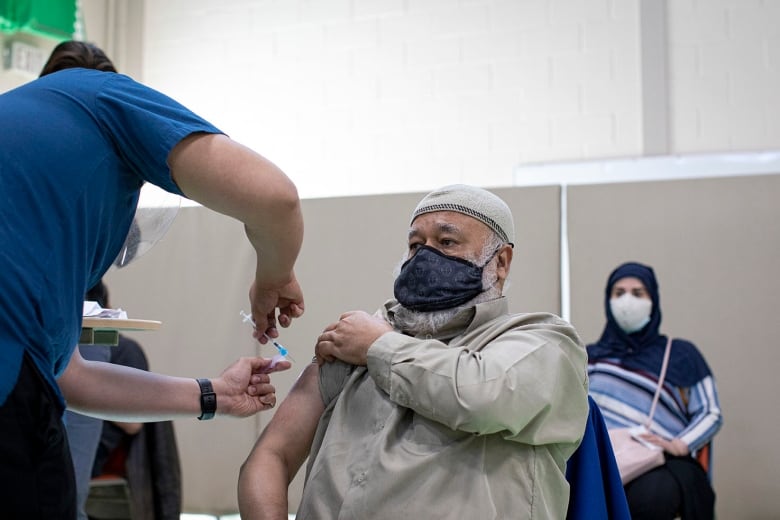 This First Person article is the experience of Sadi Muktadir, a second-generation Bengali Muslim who lives in Toronto. For more information about CBC’s First Person stories, please see the FAQ.

My parents don’t trust you.

Full disclosure though, they barely trusted me too. They’re just much more amenable to listening to vaccine information from someone they love. The lineups at pop-up vaccination clinics in Toronto have already shown that Black, Indigenous and other people of colour want COVID-19 vaccines, but there are some holdouts.

To provide some background, my parents and family were able to help build a strong, supportive Bengali Muslim community when they moved to Canada in the ’80s. They took on the challenges of learning a new language, finding work, and building a home, all the while maintaining their own faith, supporting budding immigrant businesses, and nurturing their language.

Part of maintaining this hybrid identity meant they were creating communities in close proximity to people who shared their language, their faith and other cultural institutions. It was where people could help each other. Or, at the very least, where people wouldn’t complain when they smelled shutki (Bengali dried fish) from a neighbour’s house. That’s why Scarborough has become a robust cultural hub for many communities.

But it wasn’t all sunshine and shutki.

This type of insular community that helped them thrive and build healthy, vibrant social lives can also create its own issues. People don’t place a lot of trust in media sources and public institutions outside of their community. Having never had much help from social services, police, local governments, etc., they’ve managed to build their own networks without that outside support.

I didn’t even know I could email or call the city for wildlife removal. Communications with officials in languages other than English or French weren’t available growing up, so we were just that house hatching elaborate schemes and traps to catch raccoons, and releasing them later miles away. (My apologies to Beaches residents.)

When I first heard about pop-up clinics happening at some masjids, or community institutions (shout-out Iqbal Halal Foods), and about imams and community leaders speaking out, I was encouraged and hopeful that this would persuade my parents to get vaccinated. However, while it moved the needle a touch, they were still largely unconvinced, due to other family members propagating myths about COVID-19.

When faced with the question of who to trust — between a family member who speaks their language and shares their faith or a doctor in a white lab coat they don’t know — the choice is simple for them.

Even if that doctor or faith leader shares the same language or background, things are much more palatable and convincing coming from a loved one. With that in mind, I’ve been calling my parents — not non-stop, but not non-non-stop either. It was just a regular conversation that needed to be had again and again.

I wanted to share some tips on what’s been effective, in case you’re also in the same situation.

They might initially see all of the vaccine information disseminated by scientists and public figures as irrelevant, intended for the panic-stricken and anxiety-prone. Having lived through everything they’ve lived through, they might see the current pandemic as just another chapter in their “I walked to school uphill both ways, unvaccinated, through the pandemic! Science Schmience!” story. But don’t give up. Have that conversation until they cave.

2. Use a multi-pronged approach.

Enlist another family member or family friend to also call your parents at another time and casually drop into the conversation how they got vaccinated, or why it’s important. You don’t want to suffocate your parents with constant, badgering calls though so use tact and space this out.

Just because you’re growing frustrated, or they are, you might be tempted to cease all communications with them. Don’t do it. It’s so easy to let a week’s silence turn into a month, and a fractured relationship turn into a rift. So call them and see them outside.

Don’t become upset just because they’re hesitant. After all, there’s a long (and recent) history of public institutions abusing medical programs to sterilize or experiment on marginalized people. I trust that readers can sympathize with why certain communities may be hesitant.

Spoiler alert: our efforts paid off. My parents received the vaccine a few days ago, and they shared their reasons with me. Firstly, everyone they knew had already been vaccinated or was scheduled to get it. These were people they identified with — family members and trusted friends from their community.

Secondly, a pop-up had just opened up down the street. The process was as simple as a short morning walk, hassle-free, and though they had to wait some time, there were no major logistical hurdles to jump through to get it.

And don’t worry, my mom knows I’m sharing our vaccine story. If I published this without her permission, I would not make it to my second dose.