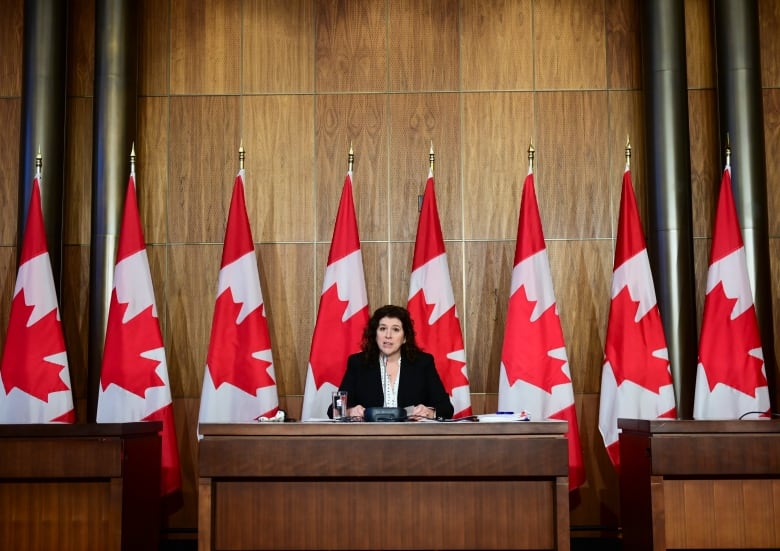 Canada’s auditor general is releasing audits today of the federal government’s performance in securing personal protective equipment (PPE) and medical devices before and during the pandemic, and of its response to COVID-19 in Indigenous communities.

Auditor General Karen Hogan will table the reports this afternoon, then take questions from reporters at 3 p.m. ET.

The reports will focus on how well the Public Health Agency of Canada and Health Canada did in meeting the needs of provincial and territorial governments for N95 masks, medical gowns, testing swabs and ventilators, and on whether Indigenous Services Canada supplied enough assistance to First Nations, Inuit and Métis communities.

“They’ve done a decent job in terms of providing supports for our member nations as well as ensuring that there are adequate supplies of PPE, and also making us a priority when it comes to the vaccines,” said Vice-Chief David Pratt of the Federation of Sovereign Indigenous Nations, which represents 74 First Nations in Saskatchewan.

Over 70 per cent of adults in First Nations have received their first dose of a COVID-19 vaccine. As of Sunday, there were 774 cases and 334 deaths on reserves.

VIO Volunteers, a not-for-profit corporation, was created in the spring of 2020 to respond to the needs of Canada’s northern, remote Indigenous communities.

Since then, it’s delivered just over 1.7 million surgical masks, 9,450 face shields and 7,662 litres of hand sanitizer to 206 Indigenous communities and organizations that support the urban Indigenous population in seven provinces.

In a written question tabled in the House of Commons last fall, Conservative Indigenous Services critic Gary Vidal asked for details on the amount of PPE delivered by the department.

When VIO Volunteers president Claudine Santos compared the list to her records, she said, she realized her volunteer organization was outpacing the government in providing masks to communities — in some cases doubling the federal contribution.

‘We didn’t ask to see the math’

Santos, who works as director of parliamentary affairs in Conservative Sen. Dennis Patterson’s office in Nunavut, said she believes it’s because VIO Volunteers took an approach to requests from Indigenous communities that differed from the one used by the bureaucracy.

In some instances, Santos said, the organization stockpiled enough masks to supply communities for six months to a year.

“It isn’t fair that we impose our own algorithms and our own standards onto these communities,” Santos said.

“We need to really embrace the fact that they are led by strong, capable people who really know and understand intimately the kind of needs that their communities have.”

Santos said there needs to be a shift in the relationship between Indigenous communities and the federal government to empower them to make their own decisions.

She said VIO Volunteers is winding down operations and making space for Indigenous-led initiatives, such as those funded by the Indigenous Peoples Resilience Fund, to take over.

Santos also said the government needs to take responsibility to ensure communities are protected from predatory practices employed by some companies seeking to take advantage.

In a statement to CBC News, Indigenous Services Minister Marc Miller’s office said its top priority has been the health, safety and well-being of First Nations, Inuit and Métis people since the onset of the pandemic.

It’s set aside more than $4.2 billion to help Indigenous communities prevent and fight COVID-19, and promised an additional $1.2 billion in the spring federal budget.

The government also pledged $354 million over five years in the budget to increase the number of nurses and other medical professionals in remote and isolated First Nations.

The department acknowledged that it has “learned lessons that will inform the Department’s continued response efforts and better prepare in case of a future pandemic.

“Indigenous Services Canada is committed to continuing and improving on our work, in full partnership with our Indigenous partners.”