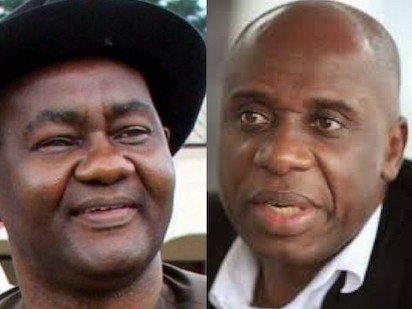 The All Progressives Congress, APC, has reacted to the alleged feud between two of its leading members – the Minister of Transport, Rotimi Amaechi, and a senator from Rivers State, Magnus Abe.

There have been reports in the media that Mr. Amaechi, a former governor of Rivers and the leader of APC in the state, has been making changes to the leadership structure of the party in the state in order to prevent Mr. Abe from emerging as the party’s governorship candidate in 2019.

The APC in Rivers said on Saturday that the changes made by Mr. Amaechi affected only the groups and caucus he (Mr. Amaechi) created, and not the party structure in the state.

The State Chairman of APC, Davies Ikanya, who personally issued a statement on the matter, said it was Mr. Amaechi’s right and prerogative to make changes within his group.

“All members of the All Progressives Congress (APC) leadership in Rivers State are intact. From our ward officers to state party executives, no one has been removed or suspended from office,” Mr. Ikanya said.

On the rumoured governorship ambition of Senator Abe, the party chairman said, “We must reinstate here that no APC member will be stopped or prevented from seeking any elective office.

“We know for a fact that as a consummate democrat, our leader, Rt. Hon. Chibuike Rotimi Amaechi has not and will not stop, prevent or even attempt to discourage any party member from seeking any political office, elective or otherwise.”

The chairman promised to be fair to all its members seeking to contest an election but said it was too early to begin to talk about 2019 election.

“This is the time to join hands, come together and work in harmony to build a stronger and better party that will defeat our opponents at the polls in 2019,” he said.