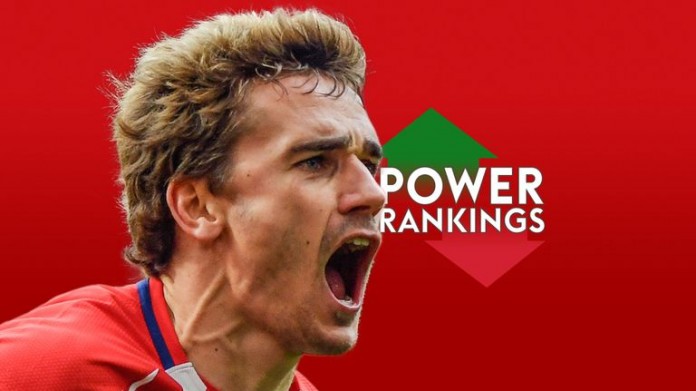 Greizmann broke the deadlock to net his eighth goal in four La Liga games and assisted Vitolo during Atleti’s 3-0 win over Celta Vigo on Sunday.

Team-mates Luis Suarez (No 4, no move) and Philippe Coutinho (No 6, up three places) both scored at the La Rosaleda to secure their places among the top performers.

Girona stopper Bono (No 9, up 16 places) kept his third successive clean sheet during a 2-0 win over Deportivo, while Espanyol forward Gerard Moreno (No 10, down four places) netted the match-winner against Real Sociedad.

The Power Rankings methodology reflects a player’s performance over the last five matchdays by awarding points to players for 32 different stats.

Below, we present this week’s Power Rankings, your club’s top points scorer and the accumulative season rankings.

The Sky Sports Power Rankings will be updated every week during the season, so be sure to keep an eye on the big movers…

Guardiola suggests Man City will move for Mahrez in summer