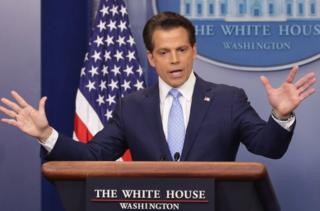 White House communications director Anthony Scaramucci has been fired after less than 10 days in the post.

The former Wall Street financier had drawn criticism after calling a reporter to give a profanity-laced tirade against his colleagues.

Mr Trump’s chief of staff Reince Priebus and spokesman Sean Spicer both left their posts over his appointment.

The decision was made by Mr Trump’s new chief of staff, John Kelly, who was sworn in on Monday.

A three-sentence statement from the White House reads: “Anthony Scaramucci will be leaving his role as White House Communications Director.

“Mr Scaramucci felt it was best to give Chief of Staff John Kelly a clean slate and the ability to build his own team. We wish him all the best.”

Earlier in the day, Mr Trump tweeted about job and wage figures, and insisted there is “No WH chaos”, referring to reports about fighting among White House staff.

Mr Scaramucci had boasted of reporting directly to the president, rather than to his chief of staff.

General John Kelly, who had formerly served as Secretary of Homeland Security, was sworn in on Monday morning at the White House.

The resignation of Reince Priebus came on Friday after Mr Scaramucci posted and then deleted a tweet which many interpreted as an accusation and a threat against Mr Priebus.

The Scaramucci missile did its job

Staff in this White House have the job life expectancy of mayflies. Only 10 days ago, Scaramucci burst on to the scene as the fast-talking New Yorker whose fanatical devotion to the president was matched only by his distaste for the established order.

Although his job tenure was short, he managed to do a lot of order-disrupting. Press Secretary Sean Spicer resigned to give Scaramucci a “clean slate”. Then, like a heat-seeking missile powered by foul language, Scaramucci went after chief of staff Reince Priebus, who was unceremoniously cashiered on Friday.

Now it is Scaramucci’s turn to wipe down the slate.

If Scaramucci’s exit was indeed orchestrated by newly appointed chief of staff John Kelly, it could be an indication that the former general is quickly asserting control over what has been a rancorous White House.

Perhaps it is the first sign of order being established, even if the brevity of Scaramucci’s tenure – he wasn’t officially set to begin until 15 August – will be a short-term embarrassment for the president.

Then again, it could be that the pace of change is quickening as the Trump administration approaches the centre of the vortex. Only time will tell.

He also called a reporter to attack Mr Priebus as a “paranoid schizophrenic” and accuse him of leaking information to the media.

During the on-the-record phone call, he also made vulgar statements about chief strategist Steve Bannon.

He also pledged to fire every member of the communications team, as part of his crusade against “leakers”.