After U.K. Election, The Only ‘Certainty’ In Britain Is Uncertainty 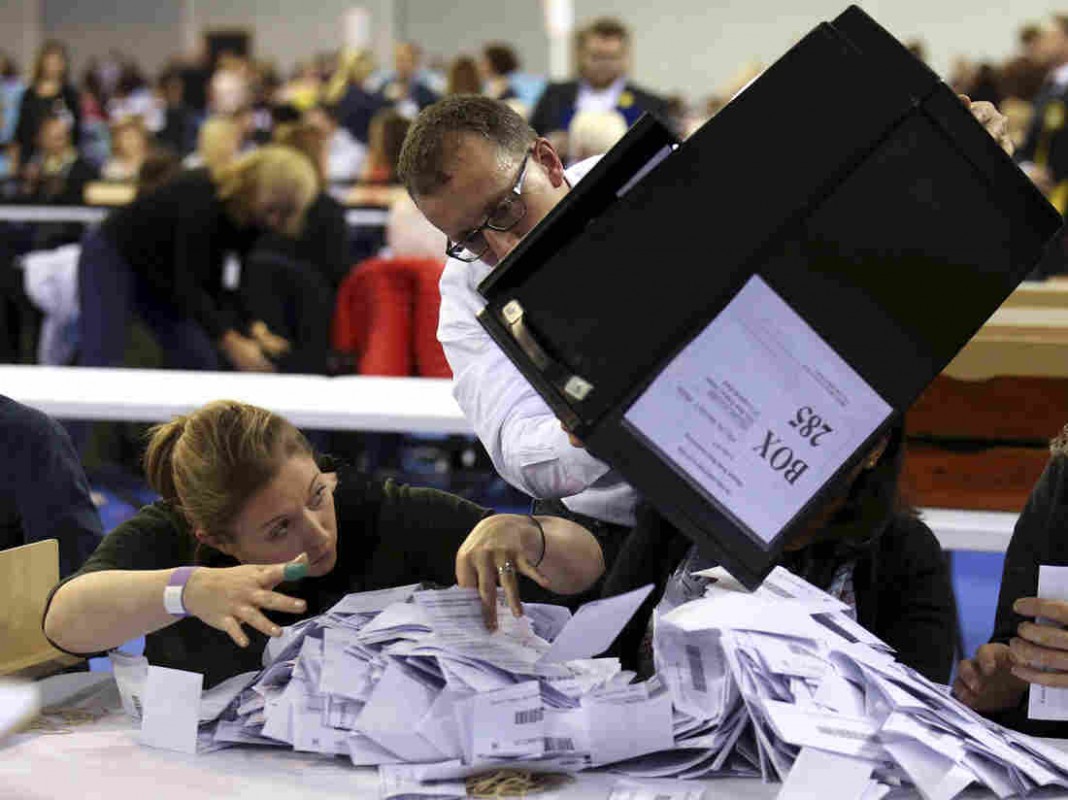 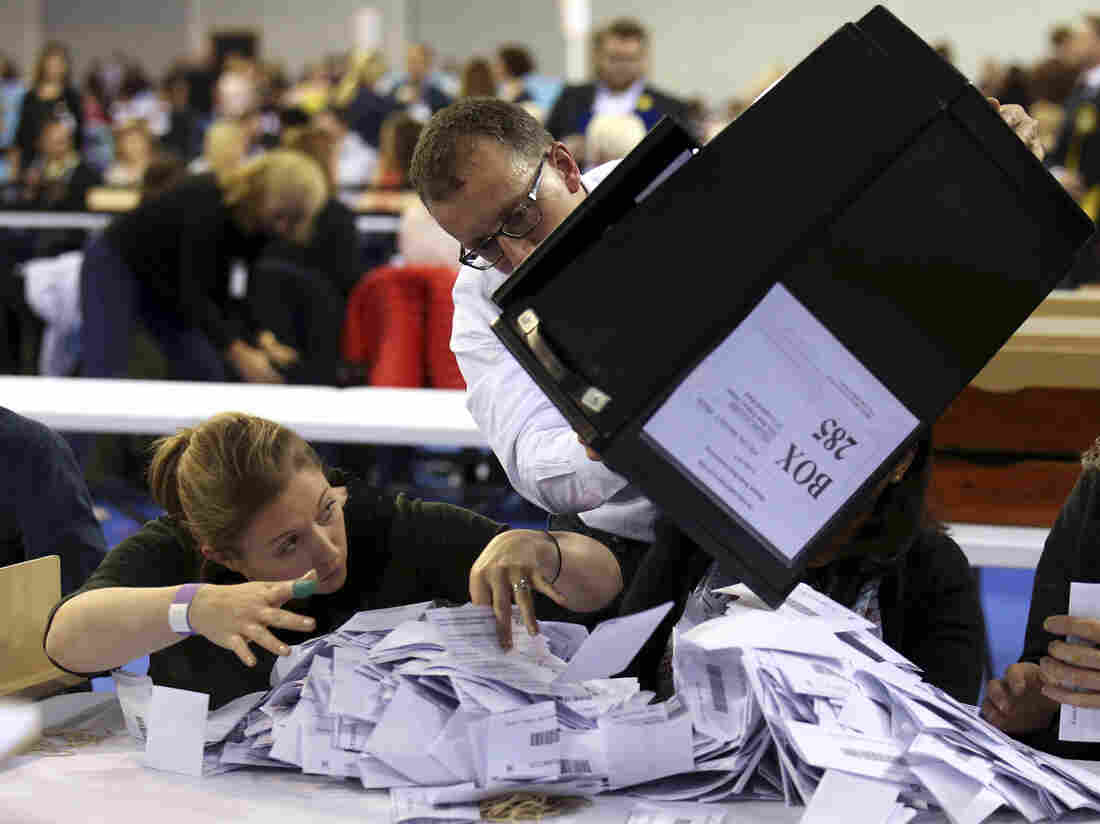 Ballot boxes are emptied to be counted for the general election in Glasgow, Scotland. Andrew Milligan/AP hide caption

Ballot boxes are emptied to be counted for the general election in Glasgow, Scotland.

Standing outside 10 Downing St. today, Britain’s Prime Minister Theresa May tried to put a brave face on the disastrous results of Thursday’s vote.

After calling a snap election in April in anticipation of a landslide, she ended up with an electoral train wreck, in which her Conservative Party actually lost its parliamentary majority. It now holds 318 seats.

Clinging to power, May said the Tories would form a minority government with the Democratic Unionist Party of Northern Ireland, which won 10 seats.

“What the country needs more than ever is certainty,” she said. 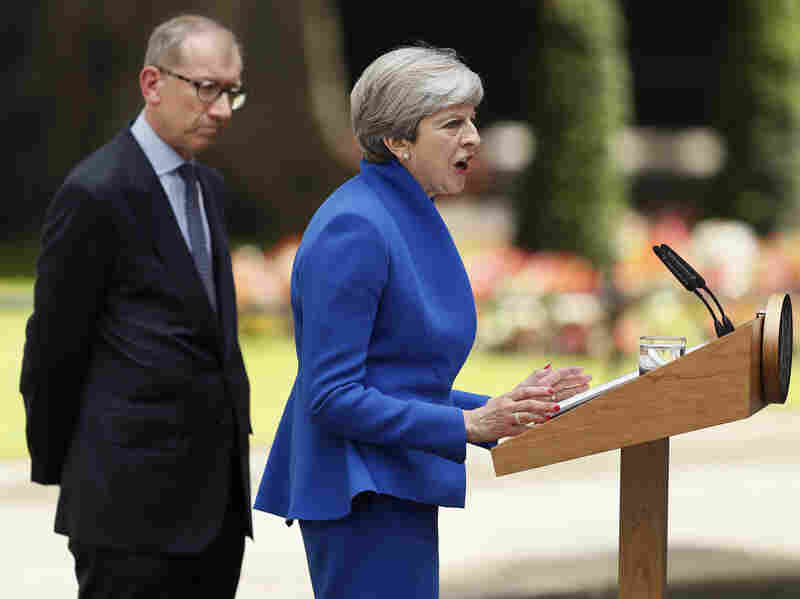 British Prime Minister Theresa May speaks next to her husband Philip in London Friday. May’s gamble in calling an early election backfired, as her Conservative Party lost its majority in Parliament. Tim Ireland/AP hide caption

British Prime Minister Theresa May speaks next to her husband Philip in London Friday. May’s gamble in calling an early election backfired, as her Conservative Party lost its majority in Parliament.

Now, though, the political landscape of the United Kingdom and the country’s path toward leaving the European Union seem more unclear than ever.

Front and center among many questions facing May’s new government is the matter of Brexit. Negotiations with the EU are scheduled to begin later this month.

“The irony of this is that Theresa May is calling this a certainty government and talking about how it’s delivering certainty,” said Brian Klaas, a fellow in comparative politics at the London School of Economics. “I think the only thing that political commentators can agree on is that we have uncertainty right now and nobody has any clue what shape this negotiation is going to take.”

May has been pressing for a so-called “hard” Brexit, which would include leaving the EU’s massive collective market and no longer allowing EU citizens to live and work freely in the United Kingdom. Some members of Parliament in May’s Tory party and the rival Labour Party favor a softer Brexit, in which the U.K. might maintain a much closer relationship with the EU.

Analysts say May’s electoral debacle could reopen what had seemed largely a closed debate — both with pro-EU members of Parliament trying to take advantage of the prime minister’s weakness and Euro-skeptic government ministers threatening her if she dares water down a Brexit deal.

“Everybody is positioning themselves,” said Anand Menon, professor of European politics and foreign affairs at Kings College London. “Remember, both parties are divided.” It’s hard to predict how they’ll react, he says. 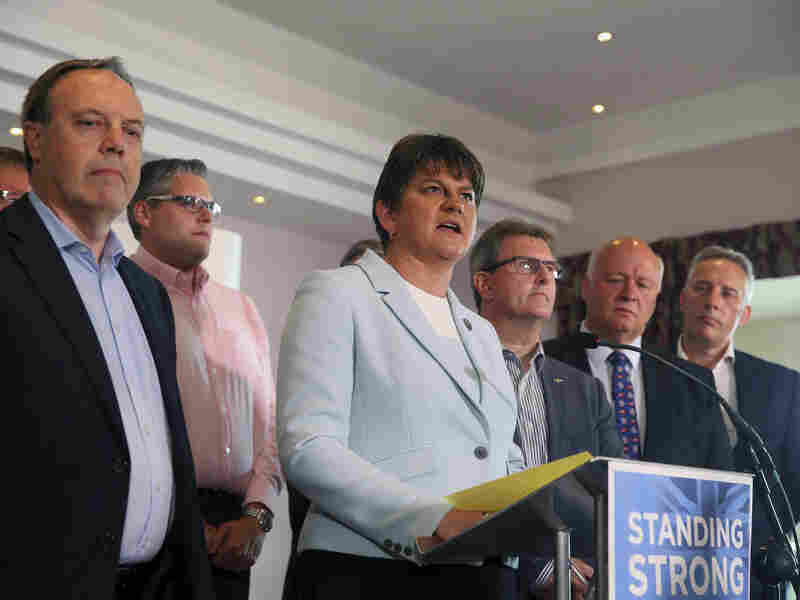 For instance, Menon said, some pro-EU Conservative legislators may wait until the Brexit legislative program comes to Parliament to start attacking it.

“I think the Conservative party as a whole is reluctant to get rid of Theresa May now because it would mean a leadership election, it would mean stalling on Brexit talks,” Menon said. “But at the same time, she’s very, very weak. So whether they can hold a weak leader in place — tactically, as it were — until they are ready to move, I don’t know.”

In Brussels, home of the EU, there was a mix of puzzlement, confusion and frustration over the chaos of British politics.

Donald Tusk, president of the European Commission, urged the May government to get on with negotiations, noting that the U.K. has less than two years to extricate itself from the EU — which is considered a gargantuan task.

“We don’t know when Brexit talks start,” Tusk tweeted. But “we know when they must end. Do your best to avoid a ‘no deal’ as result of ‘no negotiations.'”

Given May’s diminished state, many in the European Union are wondering how long she will be leading the country and – by extension – the Brexit negotiations.

“How do you negotiate when you know that the position of the partner that you’re negotiating with is extremely weak?” says Klaas of the London School of Economics.

Some in Brussels may see this as an opportunity to drive a hard deal and dictate terms, Klass believes, while others may worry a weak prime minister won’t be able to get parliamentary approval for a tough deal.

If all this uncertainty weren’t enough, the Labour Party, which won 261 seats in the election, has its own divisions to deal with. And the relationship between the Conservatives and its minority government partner, the Democratic Unionist Party, also remains unclear.

The DUP is skeptical of Europe and is pro-Brexit. But it is also deeply worried that splitting from the EU will mean a return to a hard border across Ireland that could create economic and even political problems.

With the DUP providing the Conservatives a narrow, but crucial, majority in Parliament, it could have an outsized influence.

At a press conference today, DUP leader Arlene Foster was vague about a working relationship with May’s Conservatives.

“The prime minister has spoken with me this morning,” Foster said. “We will enter discussions with the Conservatives to explore how it may be possible to bring stability to our nation at this time of great challenge.”