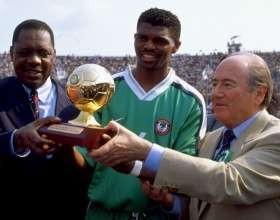 It’s been 18 years since a Nigerian player, Kanu won the African Player of the Year award.

Another year, another African Player of the Year award eludes Nigeria as Kanu Nwankwo continues to be the last Nigerian player to win the award.

Mohamed Salah was named the 2017 African Player of the Year at CAF Awards on Thursday, January 4.

It’s now been 18 years since a Nigerian won the prestigious award as Kanu beat Ghanaian and Bayern Munich defender Samuel Kuffour and Ivorian and Marseille striker Ibrahima Bakayoko to win the award.

It was a victorious comeback for Kanu who returned to the game after surviving a heart defect to rule Africa again after his first win in 1996.

The striker won the award in 1999 thanks to his exploits in his debut year for Arsenal after joining the Premier League giants in February of that year.

The Nigerian striker was fantastic, scoring lots of goals as the Gunners challenged Manchester United in England.

It was that same year he scored a memorable hat-trick for Arsenal in their 3-2 comeback away at Chelsea.

He beat Kuffour who won the Bundesliga title with Bayern Munich in 1999 and got to the final of the Champions League where they lost to Manchester United.

Since Kanu won the award in 1999, only two Nigerian players, Austin ‘Jay Jay’ Okocha and John Mike Obi have made it to the final three.

Okocha finished runners-up in 1998 behind Morocco’s Mustapha Hadji and third in 2003 and 2004 behind Samuel Eto’o of Cameroon and Ivory Coast’s Didier Drogba.

Mikel was runner-up when Ivory Coasts’ Yaya Toure won the award in 2003.