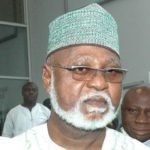 He stated this in the party`s congratulatory message to Abubakar on his 75th birthday.

Oyegun hailed Abubakar as a first-class nationalist, detribalised leader and a sterling example of statesmanship.

He added that efforts at entrenching democracy in the country and indeed globally, would be incomplete without reference to Abubakar’s contributions.

He said: “The party recalls with pride your role as the architect of the current democratic dispensation after a troubled and challenging period of transition.

“Since your exit from office, you have worked tirelessly to ensure peace in the country and in trouble-prone areas of Africa.”

Oyegun said in the lead up to the 2015 general elections, the former head of state endeared himself to many as a man of peace.

This, he said, was as a result of his outstanding work as head of the National Peace Committee on the Elections.