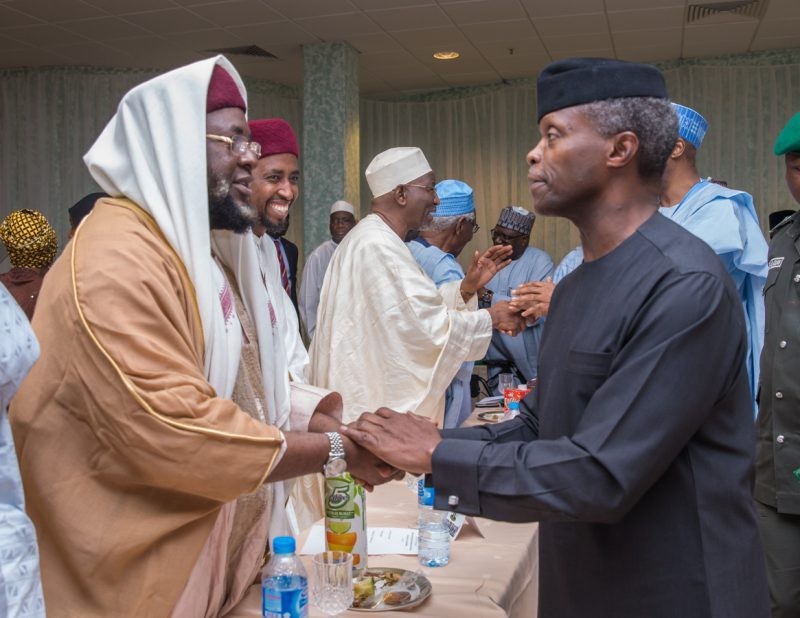 Acting President Yemi Osinbajo has urged leaders in South Eastern part of Nigeria to speak out against hate speeches capable of destabilising the country.

Mr. Osinbajo stated this Wednesday at a meeting with the leaders.

The meeting came as part of consultations sequel to threats of secession by Igbo groups and a recent ultimatum by some northern youth group giving Igbo people three months to leave the region.

The acting president gave the same message on Tuesday when he met with leaders from the northern region.

“I firmly believe that we ought to address these agitations and proclamations urgently and decisively,” he said, adding “burying our heads in the sand and expecting the storm to blow over of their own accord is not an option.

“But equally not reasonable is falling for the temptation for tit-for-tat. It has never worked or moved us closer to a solution or resolution,” he said.

He also said, “It is in my view the role and responsibility of those privileged in society to be leaders to chart a progressive and lofty course for the ordinary people.

“As leaders, we carry the burden to secure the peace, progress and prosperity of our people, and that is why our voices ought to be heard and heard loud and clear at moments like this in the defense and articulation of what is truly beneficial to the nation and the people, and what is right and patriotic.”

Mr. Osinbajo said there have recently been “loud and sometimes hostile” agitations by youth in the southeast, calling for secession of the region from Nigeria.

“Then there was the recent ultimatum issued by a group of youth from the North, asking all south-easterners living in the North to leave by October 1 this year,” he said.

He also reiterated that the Federal Government will deal decisively with any trouble maker who threatens the peaceful coexistence of Nigeria.

“There is no doubt on the resolve of government not to allow anyone get away with hate speeches and divisive words. Our emotion should not be allowed to run wild so as to threaten the existence of anyone anywhere in Nigeria.

“We will do everything within our power to protect the lives of every citizen anywhere and in any part of the country,” he said.

He thanked the leaders for their prompt response to the consultative meeting adding that he expects fruitful and frank deliberations at the meeting, which held behind closed door.