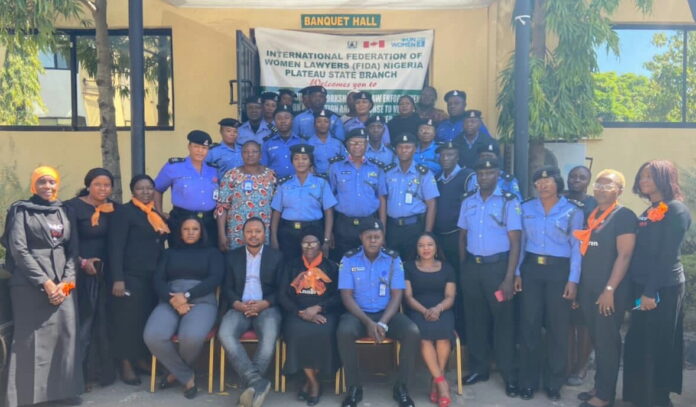 The International Federation of Women Lawyers (FIDA) Nigeria has commenced a capacity-building workshop for police officers to help prevent and respond to violence against women before, during and after the 2023 general elections.

Declaring the workshop open, Country Vice President of FIDA Nigeria, Mrs Amina Abaje said: “Women share a common feature of marginalization in the sphere of public life, and their participation and representation in political life continues to be minimal. In participatory democracy, citizens (both women and men) have equal rights to participate in elections.

“We have observed low women participation in Nigeria’s electoral process which has limited their contribution to decision making and democratic growth despite the fact that they represent about 50% of the Nigerian population.”

According to her: “Recent data indicates that women’s rates of participation in formal decision making remain one of the lowest on the continent and across the world with women occupying an abysmal 5.6 percent (86 out of 1,534) of all elective positions at both the national and subnational levels.

“Current statistics of women in parliament in Nigeria confirm that women representation in parliament is on a steady decline, 9% in 2007, 7% in 2011, 5% in 2015 and less than 10% in the 9th National Assembly. Using 2015 figures, there are only four women deputy governors in all of Nigeria’s 36 states.

“Evidently, women constitute a powerful electorate with millions of votes in Nigeria. According to INEC, Nigerian women signaled their intentions to make their voices heard in the 2019 election, accounting for about 47.14 percent (39,598,645 million) of the 84,004,084 million registered voters nationwide.

“Comparatively in 2015, three million, six hundred and sixty-seven thousand and seventy-six housewives voted in the presidential election, placing next to students (4,480,708) and civil servants (4,628,433),” she explained.

Able further stated that: “The International Institute for Democracy and Electoral Assistance (IDEA) in laying credence to this fact has clearly recognized that, elections have triggered the outbreak of violence in which women and girls were victimized which have made women a tool of political harassment and violence before during and after elections.

“This has made female voters continue to be disproportionately affected by various forms of election-related violence or threats of violence which has the effect of keeping them away from the polling stations more than male voters.

“It is on this premise that this workshop is being organized towards improving the participation of women through the mitigation of violence perpetrated against women on the 2023 general elections by strengthening the capacity of selected Law enforcement agencies, institutions, and oversight mechanisms to effectively prevent and respond to violence against women in elections, sexual and gender-based violence, and other forms of violence against women that may deter female electorates participation at the polls”, she maintained.

The Vice President further explained: “The anticipated outcome of the workshop would result to strengthened capacities of law enforcement officers in responding to violence against women in elections through well-informed strategies and practical mechanisms which would be discussed at the workshop, eradication of political violence is no doubt essential to women participation in elections.”

According to her: “When women are represented in politics, they champion issues of development in the health and education sector.”

She lamented that violence has also been seen to be one of the factors that limit women’s participation in politics.

A participant at the workshop, SP Dan Igagu, thanked the organization for organizing the capacity-building workshop, saying it enhances their performance before during and after the polls.

Similar training will be held for personnel in the Borno, Kaduna, and Kogi states (40 in each of the states).

The project, which is funded by UN Women and the Government of Canada, is themed, “Capacity Building Workshop for Law Enforcement Agencies on Prevention and Response to Violence Against Women in Elections: Gender and Disability Protection Approach.”