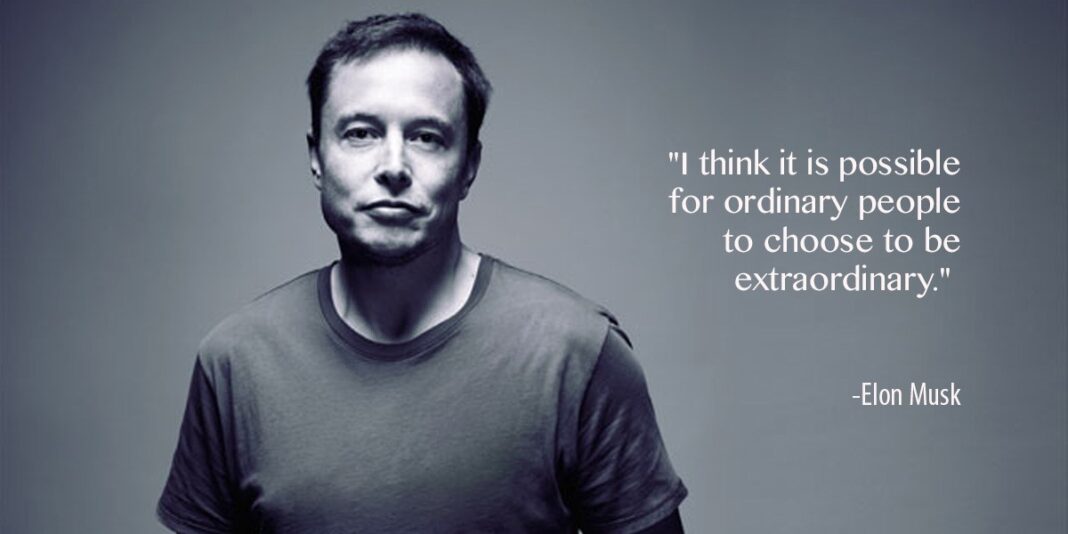 Elon Musk is one of the most influential entrepreneurs of the 21st century who is more interested in changing the world and creating enduring businesses than just the financial rewards that may flow to him from the product or service.

Business owners may sometimes succeed financially, but they do not bring as much lasting value to their communities. Every country seeks businesses that produce jobs, innovative products and services, a better quality of life, and a tax base over the long term.  Many of us can learn from this real-life Iron Man, whether we hope to be an innovative entrepreneur or employee.

Who is Elon Musk?

Elon Musk is one of the wealthiest people in the world. He made his fortune in the field of technology. Born in South Africa, he moved to Los Angeles to chase his dreams in the fabled Silicon Valley. Beginning with Zip2, he founded and sold technology companies. He was the co-founder of online money transfer giant PayPal and currently runs a SpaceX rocket company. The billionaire is one of only two individuals in the world who have founded and sold three companies for billions of dollars. He is often described as a builder and an inventor.

10 Business Lessons you can learn from Elon Musk

The keyword in this quotation is “control.” If you take dependencies on others and have no alternative supplier, the suppliers can block your success. For example, if you build a car and source your engine from a single supplier, that supplier controls your fate. This is why Musk prefers to make everything he needs or have multiple suppliers. He does not want to buy components from traditional suppliers of launch who want a launch price to remain high. This is a set of problems related to what I have called “wholesale transfer pricing” in other posts on this blog.

The main reason why most people don’t do what they desire is that they are afraid to fail. There’s no crystal ball for success. Even Musk couldn’t predict how Tesla Motors would turn out. But as he said, “If something is important enough, you should try even if the probable outcome is a failure.” If you care about something, you should put every effort into following your dreams. At the same time, be ready in case it doesn’t work out. It’s easier to recover from a failure if you already have a backup plan.

Instead of letting fear stop you, you should acknowledge it and develop a plan to handle its effects. Before he started the SpaceX program, Elon Must dedicate $100million to the endeavor. He said that if he failed to launch a rocket into space with that budget, he would shut down operations and shelve the idea. His first two launches cost him $90 million, and they both failed. The third cost him $10 million, and it succeeded. From this, we learn not to be afraid of failure by coming up with a plan to manage it.

If you’re co-founder or CEO, you have to do all kinds of tasks you might not want to do … If you don’t do your chores, the company won’t succeed … No task is too menial. Starting a business is as brutally hard as Musk describes. If you like doing things that are brutally hard, and some people do, you may want to start a business. If you don’t like doing that, then don’t. It’s that simple. Of course, just liking challenges and hard work is not enough to create success. The founders must have the other required inputs like the necessary skills, significant innovation, a big addressable market, and the ability to assemble a great team.

Musk doesn’t waste his resources on advertising. Instead, he asks himself: “Will this activity result in a better product or service? If not, I stop those efforts.” As a marketer myself, this one pains me to hear. But I understand Musk’s point. A top-quality product will lead to lots of great word of mouth. Focus on that first, and success will follow.

Many people shy away from criticism. A well-thought-out critique of whatever you’re doing is as valuable as gold, and you should seek that from everyone you can, but particularly your friends.

Please pay attention to negative feedback and solicit it, particularly from friends. Hardly anyone does that, and it’s beneficial. It’s essential to have a feedback loop, where you’re constantly thinking about what you’ve done and how you could be doing it better. Some people don’t like change, but you need to embrace change if the alternative is a disaster. To learn from success or failure, you need effective feedback loops.

Elon Musk constantly seeks criticism. When he spoke with the automobile engineers during the development of the Tesla Electric Car, he asked them to tell him what was wrong with his design instead of what was good. In this way, he learned his mistakes and fixed them. Look for constructive criticism and learn from it. This is a valuable lesson from the technology billionaire.

Some people take feedback better than others, particularly if it is criticism. Musk and people like him are very thick-skinned and have a scientific orientation. The best approach is to have “strong ideas weakly held.” Someone with strong ideas should know the topics well and have researched all sides of the issues. By keeping these strong views weakly held, the person can adapt as new information and idea arrive. What people struggle with most is learning from mistakes? Through making mistakes and having success in the real world, you can learn and establish sound business judgment.

Elon Musk is notorious for his work ethic. He often works up to 100 hours a week between his multiple companies. Nobody says you have to do the same but remember Elon, next time you feel exhausted. I mean, you have to put in 80- to 100-hour weeks every week. [This] improves the odds of success. If other people are putting in 40 hour work weeks and you’re putting in 100 hour work weeks, then even if you’re doing the same thing, you know that you will achieve in four months what it takes them a year to achieve.

The work ethic of Elon Musk is legendary. He has been described as working 15 hours a day and sleeping six hours a night. Musk’s ex-wife talks about his work habits this way: “I had friends who complained that their husbands came home at seven or eight. Elon would come home at eleven and work some more. People didn’t always get the sacrifice he made to be where he was. He does what he wants, and he is relentless about it. Remember Elon when you feel unmotivated. He’s setting the pace for what it means to push you. If you’re not doing the same, you may be sacrificing your potential.

7. Create To solve a Problem Instead of Complain

Most people complain about the economy of their country or lack of jobs. Not Elon Musk. Instead of moaning about the problem, Musk searched for a solution. Building the future for yourself is the best way to achieve the outcomes you actually want. Complaints are a sign that there is a problem to be solved, he says. Paying attention to complaints is a great way to find innovative ideas that people actually need.

Musk may be the smartest and hardest working entrepreneur of the 21st century, but he even has limits.

Back in 2006, Elon had an idea for a solar panel company. But he knew that if he started it, he would be overextended and unable to give everything necessary to SpaceX and Tesla. So he shared his idea with Peter and Lyndon Rive, who founded SolarCity in July of that year. Musk was the principal investor in the company and has served as chairman of the board since its inception – but he’s kept a safe enough distance so that it doesn’t eat up too much of his time and energy.

Solar isn’t the only industry he sees a huge opportunity. Supersonic jets, hyperloops, and virtual reality interfaces have all earned his attention. He’s skimming the surface in these fields but not diving in headfirst.

“Don’t just follow the trend, Create them,” Musk said. The most successful companies focus on creating innovations. They don’t try to chase the competition. Stand out by focusing on what makes you unique instead of chasing others.

10. Find and Start Businesses that Align with Your Higher Purpose

Musk used to struggle with his purpose until he found out what really mattered for him. He described the realization:

“I always had an existential crisis, trying to figure out ‘what does it all mean?’ I concluded that if we can advance the world’s knowledge, if we can expand the scope and scale of consciousness, then we’re better able to ask the right questions and become more enlightened. That’s the only way to move forward.”

Musk’s mission to “expand the scope and scale of consciousness” has had him looking beyond simple profit benchmarks to finding businesses that are making a global impact for good. Every day when Musk goes to work, he knows he’s helping to reduce carbon emissions, produce renewable energy, and help save the human race in case of a collision with an asteroid.

How’s that for motivation?

The first step to leaving a legacy is to answer Musk’s existential question for you:  “What does it all mean?” When your business is aligned with your purpose, you will work harder, smarter, and better to achieve your goals.

If you want more lessons from legendary entrepreneurs, check out our article on 10 Things you can learn from Bill Gates and add to Your Business.