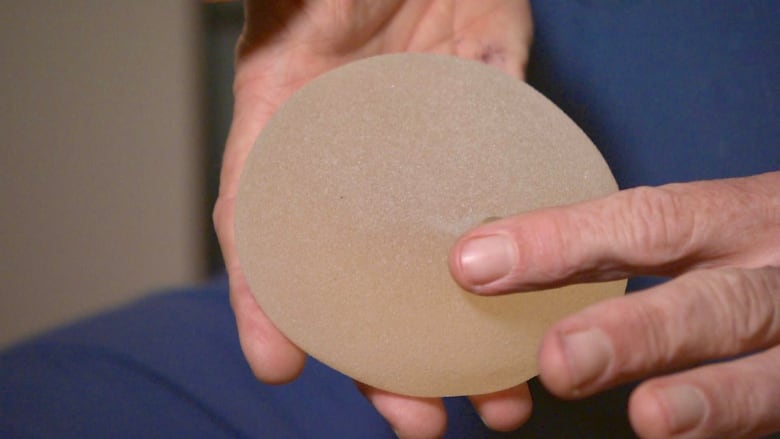 A British Columbia woman who learned second-hand that her breast implants had been linked to a rare form of cancer is demanding that the federal government mandate a system of personalized recall alerts for all items surgically implanted in people’s bodies.

To prevent cancer, Carmen Smith opted to have both of her breasts surgically removed and five months later received implants as part of her reconstructive surgery. Seven years later, she paid $10,000 to have her breast implants removed after they were recalled by the manufacturer.

The 48-year-old mother of two, a realtor who lives in Port Coquitlam, said she was shocked to learn that there’s no central registry kept or required to ensure people with breast implants are notified personally if something goes awry.

She wants Canada to require manufacturers to create a registry and co-operate with surgeons to ensure patients are notified, as fast as possible, if something is even potentially wrong.

While the federal government says the responsibility for notifying patients rests with manufacturers, not Health Canada, when an issue arises with an implant, plastic surgeons in Canada say there’s a real need for a government-mandated registry, noting that thousands of people in the country were affected by the breast implant recall.

“It’s simply not acceptable that we have better measures in place for motor-vehicle recall — we are talking about a medical device that is in human beings,” Smith said.

When Smith learned about Allergan’s Biocell textured implant recall from a news story in 2019, she had to hunt down her own medical records to confirm which implants were inserted inside her. Smith said she fears some people never realize they have recalled devices in their bodies.

On April 4, 2019, Health Canada announced its intent to suspend licences for the Biocell implant as a precautionary measure due to “the rare but serious risk of breast implant-associated anaplastic large cell lymphoma (BIA-ALCL).”

At the end of May 2019, Allergan voluntarily recalled the product that had been surgically implanted in thousands of Canadians.

In an email to CBC News, Health Canada said it’s not responsible for tracking breast implants, and there are regulations in place, which were recently strengthened, to ensure that manufacturers take responsibility to notify patients.

But Smith said that didn’t happen in her case.

“After my surgery, I was given a card with the serial and reference numbers for the devices that were placed in my body by my plastic surgeon,” she said.

“I have always thought that it was odd that Allergan didn’t contact recipients that had their products placed in them, because the card that I was given was how they keep a record for warranty purposes. [It’s] so odd that they don’t use the same system to alert recipients to recalls or any important information with respect to the implants.”

Allergan Aesthetics, an AbbVie Company based in Dublin, declined an interview about this case but said in a statement to CBC News that it does work to inform patients. The company said Health Canada does not recommend the removal of textured breast implants in asymptomatic patients, adding, “Patient safety is Allergan Aesthetics’ highest priority.”

In 2011, Smith had a double mastectomy after she learned she was at a high risk for cancer.

“The doctor said you have two ticking time bombs on your chest and it’s not if, but when,” she said.

So when she learned that her implants were linked to a rare cancer, she said she wanted them gone.

Her former plastic surgeon told her that the provincial Medical Services Plan would not pay for the removal of the devices unless it was deemed medically necessary, a fact confirmed by the Ministry of Health.

So Smith paid $10,000 to remove the implants, which she then learned had ruptured.

A type of cancer linked to textured breast implants may be more common than initially thought. CBC News looks at why the number of cases for this rare cancer keeps increasing. 2:34

The surgeon found that silicone from the gel capsules had migrated into her chest cavity and lymph nodes.

Smith said she was shaken by the news, despite the fact she was told it was not life-threatening.

‘It created a lot of anxiety in the patients’

Smith said she remains convinced that symptoms — from hot flashes to itchy skin — that she had before removal are an autoimmune response related to the leaked silicone.

So she opted not to replace her implants, and she wants more communication in place to alert people of problems with implants.

“I found out we have no tracking system for medical devices, which is in my mind deplorable,” Smith said.

Van Laeken said Allergan’s Biocells were “sought-after” tear-drop-shaped textured implants, about the consistency of gummy bears, that created a more natural shape. So the recall affected thousands of patients in Canada, she said.

The Canadian Society of Plastic Surgeons (CSPS) discussed the issue of a registry with Health Canada for years, urging the government to take over, but to no avail, said Dr. Peter Lennox, who served as president of the CSPS for the 2016-17 term.

For now, the society has set up an unofficial database and does its best to alert individual patients, he said, adding it’s the group’s position that the data in that registry should be managed by the government.

“One of our big disappointments was we discovered that there really wasn’t a registry. It created a lot of anxiety in the patients. We had difficulty tracking [patients] all down,” Van Laeken said.

Health Canada said manufacturers of medical devices such as implants are required to keep records of who did the procedure on whom and where. In the case of a recall, the manufacturer is also responsible for “developing communications to inform affected parties.”

But the federal government is not responsible for the tracking of breast implants — nor does it require a registry.

Now that patients are complaining they were not notified by Allergan, CBC News asked Health Canada what action it will take, but it has not yet received an answer.