Racist mayoral candidate Kevin J. Johnston is about to have all Calgary voters’ names, addresses 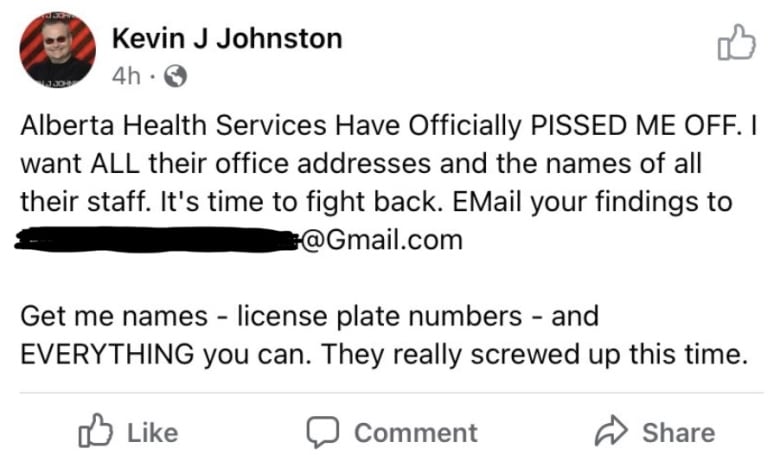 In the not-so-distant future, a man who has a history of racist, hateful, allegedly violent behaviour and is attempting to publish the private information of Alberta Health Services employees is set to receive a list that includes the names, addresses and phone numbers of every Calgarian eligible to vote.

That’s because Kevin J. Johnston, known for organizing, leading and speaking at far-right protests against government-imposed pandemic restrictions, is running for mayor of Calgary.

In his capacity as an official candidate, Johnston will receive voter information for everyone in the city the day after nominations close in September.

Johnston is currently facing an assault charge in B.C., hate crimes charges in Ontario and has made numerous posts online attempting to get the addresses of AHS employees with threats to show up at their homes armed.

But when reached for comment by CBC News, Johnston said he did not issue threats.

On his social media channels, Johnston makes it clear he is anti-mask, anti-vaccine and a COVID denier, with the majority of his rage directed at AHS employees, current Calgary Mayor Naheed Nenshi and the city’s police officers.

One AHS inspector, in particular, has been the target of Johnston’s rage, with the mayoral candidate asking his followers to track down her address. He has also posted photos of the woman, her husband and children online for his thousands of followers. Johnston says he obscured the faces of the children.

“You’re all going to be in handcuffs,” said Johnston, addressing AHS employees on his radio webcast on Saturday, after he took videos of his friends Artur and Dawid Pawlowski being arrested by Calgary police officers.

The Pawlowski brothers have been organizing illegal church services in defiance of public health restrictions throughout the pandemic.

“I’m coming for you all,” he told AHS workers. “If SWAT won’t come, it’s simple, I’ll arm myself and I’ll come right to your doors.”

The Calgary Police Service says it is “deeply concerned” that the personal information of its members and others in the community is set to be distributed to candidates.

Kevin J. Johnston says he has their home addresses and is determined to make the lives of some Alberta Health Services staff “uncomfortable.” 0:35

In a written statement provided to CBC News, CPS said it is “working with the city in an attempt to limit the disclosure.”

“Our members, along with those of our partner agencies, are at considerable risk of harassment and retaliation from those in the community who may choose to harm them and their families,” said CPS in its statement.

“This is especially concerning if a mayoral candidate has ill intentions and has expressed a desire to cause harm.”

Weeks ago, Johnston posted another message to AHS employees telling them “we’ve got seven of your home addresses so far.”

Johnston said he would put their names and addresses into a lawsuit and then distribute the documents.

“It is legal to dox somebody and that’s exactly how we’re going to do it. So AHS, your comfortable little lives are going to be very uncomfortable so long as I am in Alberta which is going to be a very long time.”

Dox is a slang term for publicly identifying or publishing someone’s private information.

Initially in the phone interview with CBC News, Johnston said he was not attempting to dox anyone. But when asked about the comments he made regarding legal doxing through court documents, he said, “Yeah, so what? It’s true.”

If information gleaned from doxing is used in certain ways — for example, to harass someone — police can get involved.

Johnston has a history of posting alarmingly racist and hateful comments online.

In March, Johnston was selling coffee in Calgary using blatantly racist branding, calling it “Wasted Native” with the slogan, “Forget gas, huff this” accompanied by an equally disturbing logo.

More recently, Johnston posted a video suggesting he take a photo of himself in front of an image of Calgary Mayor Naheed Nenshi hanging from a noose.

There are allegations that Johnston’s behaviour has crossed the line from threats to violence.

In March, video shows Johnston punching a grocery store employee in a Dawson Creek, B.C., parking lot after he was kicked out of the shop for refusing to wear a mask.

Johnston was charged with assault and will next appear in a B.C. courtroom on May 18.

There are more looming criminal charges against Johnston.

In 2017, police in Mississauga, Ont., charged Johnston with hate crimes after he posted a YouTube video offering a $1,000 reward for video recordings of Muslim students “spewing hate speech during Friday prayers.”

Peel Regional Police said at the time that the charge of wilful promotion of hatred against an identifiable group followed “numerous” incidents and concerns over information published on various social media sites.

Johnston has not yet gone to trial on those charges, with his next court date set for June.

Neither the B.C. nor the Ontario charges have been proven in court.

‘Hate speech at its worst’

In 2019, an Ontario judge issued a ruling in a libel suit filed against Johnston, calling his behaviours a “loathsome example of hate speech at its worst, targeting people solely because of their religion.”

The judge awarded Mohamad Fakih, founder and owner of a Middle Eastern restaurant chain, $2.5 million in damages after Johnston publicly claimed Fakih was funding terror groups and using his restaurants to bring in “illegal aliens.”

In addition to the videos, Johnston approached Fakih while he was at a local mall with his three children, accusing him of being a terrorist and snapping photos of the family, even following them into the parking lot as they tried to leave the mall.

Now, three years later, and 3,000 kilometres to the west, Johnston is running again.

Calgary says both the local bylaws and the Local Authorities Election Act allow the list of electors to only be used for campaign purposes, which Johnston says he will honour.

Still, there’s concern about what he could do with the information.

“Our Local Authorities act doesn’t really have any guidance or escape valve related to folks who might not be necessarily running for public office in, if I could call it, good faith.”

With Johnston’s history of bigoted, xenophobic comments, Velji says there’s a tricky balance between a candidate’s right to access voter information and the risk of it getting into the wrong hands.

The personal information Johnston will soon have his hands on is crucial, particularly for first-time candidates, to help with voter outreach and mobilization, says Velji.

But “[he] will now have further ammunition to unfortunately continue some of the unsavoury and illegal activities that he’s been accused of and charged with in the past.”

Young Indigenous voters in Sask. share their priorities ahead of the federal election