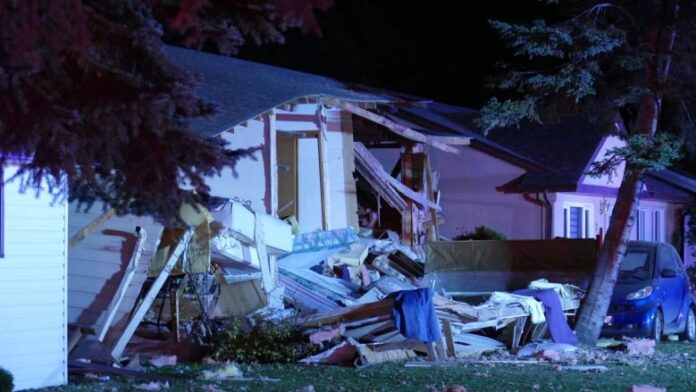 A woman is dead and a man was airlifted to a hospital in Winnipeg on Tuesday evening after a house exploded in the east end of Brandon, Man., police said.

The front of the home on Queens Avenue East was torn open and a mattress and other household items were strewn across the front lawn and onto neighboring properties.

Police were called to the single-storey house around 8 p.m. Tuesday.

They found a 63-year-old woman dead in the house and a 63-year-old man in critical condition. He was airlifted to Winnipeg’s Health Sciences Centre. Brandon is about 215 kilometres west of Winnipeg.

Police said Tuesday some homes in the area were evacuated briefly, but residents have been allowed to return.

“The air was just thick as paste with the smell of natural gas,” said Erin Foukes, who lives on the same block as the home. “Looking right across the street … the house was just obliterated.”

Foukes and her family were among those forced to leave while crews dealt with the aftermath.

“We packed up the kittens in backpacks, literally, and gym bags and went to Tim Hortons for a half an hour,” she said. “It’s surreal.”

Neighbors told CBC News that the home was recently sold and believed it was under renovation.

“It is so terrifying, and I was worried about the people who were inside,” said Gebeyehu Yigzaw, whose home is across the back lane.

Yigzaw said he was on his way home when his wife called. “My wife told me that our house … just shook,” he said, adding that he arrived at his house as emergency crews arrived at the scene of the explosion.

Manitoba Hydro crews were also at the scene. A spokesperson said Tuesday its crews hadn’t determined a cause, but the utility was dealing with a “probable” gas explosion.

Brandon police said Wednesday that the office of the fire commissioner is investigating, and there was a strong smell of natural gas in the area.