With new contract, Stephen Curry vows to do more off court 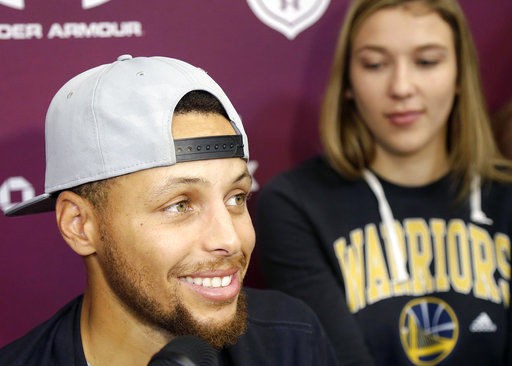 WALNUT CREEK, Calif. (AP) — A rich new contract in hand, Stephen Curry is more determined than ever to give back both his time and financial resources wherever he is needed in the Bay Area.

The Golden State Warriors superstar has yet to even make a major purchase for himself since finalizing the $201 million, five-year contract late last month. Oh, while on vacation last month in the Turks and Caicos the day his new deal became official he did have a little fun flying his drone over the hotel to get some special photos.

“I don’t want to get too deep into it but for the last couple years trying to figure out how I can make the most impact off the court on a consistent and impactful basis,” the 29-year-old Curry said Monday, going on two months after winning another NBA title. “Going forward and obviously keying in on the Bay Area specifically to hopefully leave a lasting impact for all the good that has happened in my life and my family here since I’ve been here the last eight years. Obviously over the next five to really impact the community for the better and use my platform, not only just dollars but my platform and connections and ideas to make that happen. The contract puts more of a responsibility to make that happen and I’m obviously aware of that. And I have a great team around me that’s going to help me do that.”

This week, the two-time NBA MVP is hosting his fourth annual SC30 Select Camp with about two dozen of the top high school players at The John Muir Ultimate Fieldhouse before a showcase event Tuesday night at Kezar Pavilion in San Francisco. He dazzled the prospects with his shooting routine, provided coaching and even took part in some 3-on-3 right along with the campers.

Curry said not much surprises him anymore when it comes to NBA drama such as Cavaliers star Kyrie Irving’s request to be traded and no longer play alongside LeBron James. They won a championship together in 2016 before the Warriors won the June rematch.

“I don’t know the ins and outs of what conversations are going on. It’s obviously surprising, but at the end of day nothing’s really surprising when it comes to story lines and things like that from year to year,” Curry said. “It’s just kind of the nature of the beast. I’m sure if something does happen I’ll be able to talk about it more but right now he’s still on Cleveland’s team.”

“It’s huge because we have great potential and opportunity to do some amazing things and win more championships,” Curry said. “When you have that chemistry, you don’t want it to end. You don’t want to have to kind of start over. I wouldn’t necessarily say rebuild, just take advantage of the camaraderie and the chemistry and the vibe that we’ve created around the Warriors organization.”

It’s another whirlwind summer for Curry, who made an impressive appearance in last week’s Web.com Ellie Mae Classic golf tournament before missing the cut in the tournament, which is one step below the PGA Tour.

Two championships in three years is pretty special, and he never forgets that.

“I think about it every day and it kind of helps me put things in perspective, how blessed I am to be able to do what I’m able to do on and off the floor, the opportunities I have to even run a camp like this. Because I used to go to the camps of guys who played before me and learn from them and just be kind of awe-struck and eyes wide open trying to learn as much as I could,” he said. “Fast forward to these last few years and now I’m on the other side of that equation giving back to the next generation of players. All of that is very surreal but it’s humbling just to be in that position. It actually helps me stay motivated to keep working because I don’t want the ride to end.”