Wifey Wednesday: How Can We Talk About Male Victims of Emotional Abuse? 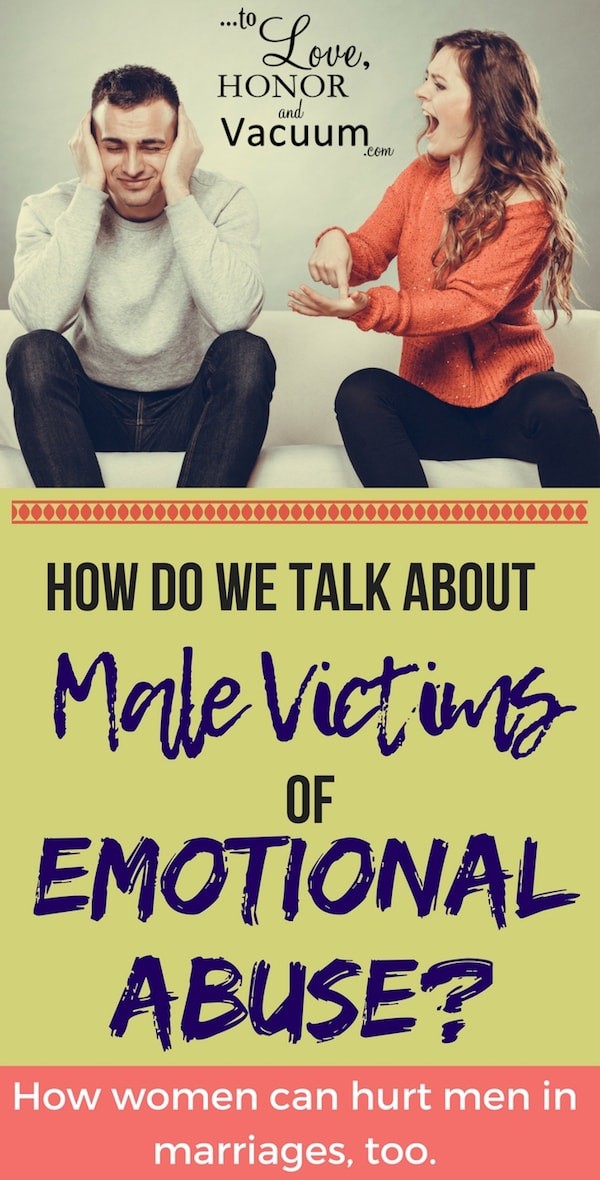 I find it very difficult to blog properly about emotional abuse.

Every Wednesday on this blog for almost ten years I’ve talked marriage. And today I want to look at the darker side of some marriages.

I’m very passionate about helping women see the truth about the destruction that emotional abuse causes. I’m a firm believer that much of the crisis of abuse in the church comes because people misunderstand what marital submission means, and then say that she should stay in an abusive marriage because he is the leader.

But at the same time, I don’t think abuse is the actual problem.

Similarly, I’m very passionate about stopping sexual assault. I believe that sexual assault is one of the worst kinds of crimes, because it hits at the very centre of our identity.

But I also don’t think sexual assault is the problem.

I think sin is the problem.

We live in a world where pride and selfishness reign. Because of that, it is hardly surprising that many women are victims of sexual assault, and many wives are victims of emotional abuse. Indeed, that was one of the results of the fall–“your desire will be for your husband, and he will rule over you.” One of the curses that women endure, and that Jesus came to reverse, was that evil men would often dominate and hurt women.

But it is not only men who sin. Women sin, too.

When I was homeschooling my girls we read Uncle Tom’s Cabin together, the classic novel about American slavery. I expected it to be caricature of southern life. Instead I was blown away by what was probably one of the top 10 novels I have ever read. What made it so powerful, though, was that not all good characters were black and not all bad characters were white. Some white characters were good; some could have been good, but they were just too weak; and some were downright evil. The evil was not all the same, either. Some were outwardly abusive, and some were just simply mean and entitled. It was the same with the depiction of the African American characters. Some were selfish. Some were lazy. And some were the absolute best depiction of real grace I have ever read.

In other words, it was just like real life.

The problem, you see, was not racism itself or the quest to dominate. The problem was sin.

Sin comes in all forms, and people will sin in different ways. No one group is perfect while another group is all bad.

That’s why I don’t want to pick sides on this blog, unless that side is simply standing with Jesus

I want to see marriages transformed, and the only way that happens is when the individuals in the marriage are transformed to look like Jesus.

Because I want to see marriages transformed, I naturally end up talking about abuse issues. That makes some people uncomfortable, especially people who are big proponents of men having absolute authority in marriage. (And I have a big post coming up next week that will challenge some of these people!).

And yet I also get criticized by the feminist camp, especially when I say that women sometimes claim abuse just to get out of an unhappy marriage. I know many families where abuse was present; and I know many families where women claimed abuse and tore their families apart for selfish reasons. Both things can be true at the same time–women can be abused, and women can improperly claim abuse–because the root problem is not abuse. It is sin.

And so with that HUGE preamble, I want to talk about something else I see: women can also be the perpetrators of emotional abuse.

I believe that emotional abuse is a worse problem for women in the church than for men, because many misinterpret Scripture to support husbands emotionally abusing their wives. Add to that the fact that most men are physically stronger than most women, and that most women are at a financial disadvantage in their marriages, and abuse in general is a more acute problem for wives than for husbands.

Nevertheless, that does not mean that men are never victims of emotional abuse. Many men are living in marriages where they are constantly criticized and yelled at; where their wives throw things and swear profanity at them; where women deny sex for years on end, and tell men they have no recourse. And for these individual men, those marriages are torture indeed.

I don’t think the church has adequately addressed this at all. When a woman goes to a counsellor and explains symptoms of what is obviously emotional abuse, some counsellors will recognize this (though not all will) and will endeavour to help her. We have a big awareness of what abuse against women looks like. When men go in and describe the same symptoms, though, in general they are not given the same level of help. They are told they need to love their wives more as Christ loves the church; that they need to learn to communicate better; that they need to learn to forgive.

We simply don’t know how to help men whose wives are narcissistic or evil.

Then there’s the issue of withholding sex for years on end.

At one of the marriage conferences my husband and I spoke at, we were approached by a man who had been married for 25 years. When their last child was born, ten years ago, his wife came to him and told him that now the sexual side of their marriage was over, and he would have to get used to it. I hear from men who earn all the income in the marriage, who help around the house as much as they can, who volunteer in church–but whose wives won’t even sleep in the same bedroom, won’t talk to them about anything important, and haven’t had sex in years. The men have tried seeing pastors and counsellors, but the wives refuse to go. This is simply not acceptable.

And when the men seek help, it is assumed that the men have somehow caused this. Were they mean to their wives? Did they ask for all sorts of weird things in bed? Did they pressure her too much? It must be his fault!

But I also believe that some actions rise so much to the level of abuse that to ask someone what they did to cause it is incredibly hurtful.

When a woman has been physically slapped and punched around, we now know enough (at least I sure hope we do) not to ask what she did to cause it. But when a man has been so cut off from from emotional intimacy that he is completely rejected sexually by his wife, we tend to blame him. We don’t recognize how hurtful this blame is.

Certainly there may be good reasons why a wife may withhold sex: physical pain; emotional turmoil; abuse in the marriage; chronic pornography use. In many cases leaving the marriage bed is setting up a good boundary while important sin issues are dealt with! But absent these things, there really is no excuse.

It’s incumbent on a woman who is withholding sex to get help, even if she has very good reasons for having a difficult time with sexual intimacy. After all, many abusive men have things in their pasts that have led to them growing up to be abusive–but they are still abusive. And they still need to stop–or at least get help now so that they can move towards a healthy sexual relationship soon.

In July I wrote a post on why it is wrong for a husband to demand sexual favours of his wife–because it denies that sex is also an emotional and spiritual connection, makes it only about the physical, and thus says, “You are not really worth truly knowing.” You are only worth using.

When we demand something sexually we do this. But when we withhold sex altogether we do it, too. We tell our spouse, “you are not worth truly knowing.” And cuts at the very core. That’s why I think it’s emotionally abusive.

Is withholding sex in your marriage for years on end abusive? I think it is.Click To Tweet

(Now, as soon as I say this, I know that people will get upset at me, and say that it’s nowhere near as bad as being physically assaulted or being constantly yelled at and manipulated or stalked. That’s okay. I think we can say that something is abusive but simultaneously say that other forms of abuse may be worse. But just because it may not be as bad as something else does not mean that it is not wrong, in and of itself).

When someone is being emotionally abusive, you can’t love them enough into stopping.

Hear me very clearly on this one: Jesus does not want people stuck in pain and not growing. Jesus wants people to look like Him.

When our “loving” is allowing our spouse to live an unfulfilled, empty life where they are depriving themselves of intimacy, then we are likely not loving well.

To love someone is to want the best for them. That is why I tell women whose husbands are being abusive that they must draw boundaries and confront. And that is why I would like today to tell the men the same thing: your marriage will not get better and your wife will not be healed and look more like Christ until you draw boundaries and confront her inability to be vulnerable and intimate.

But I think that we have a real problem helping men in abusive relationships, because we don’t give them any recourse.

I’m not sure exactly what we should do, only that we simply must do something. So can we talk about it today?

What should a husband do if he is being constantly belittled, insulted, or called names? What should he do if his wife has withheld sex for months or years? How can we address this better as a church community? Let’s talk in the comments!