WHY NIGERIA IS YET TO HAVE ANOTHER FELA 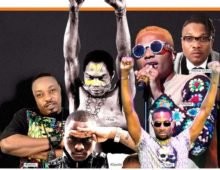 THIS year, annual music festival, Felabration will mark the 20th anniversary of the demise of human rights activist and creator of Afrobeat genre of music, Fela Anikulapo-Kuti, aka Abami Eda. He died August 2, 1997.

And while the mega week-long musical event is slated for October 9th to 15th, 2017, it is hoped that as usual, it will attract thousands of locals and foreigners to the New Afrika Shrine in Lagos, Nigeria.

However, 20 years down the line (and 19 years of Felabration), Fela’s legacy, the Afrobeat genre, seems to be getting a dissimilar perspective as a number of Nigerian musicians that claim to draw inspiration from Fela, have veered off the canons of Afrobeat as a tool to criticize inept leadership, and oppressive political dictatorship, while also speaking for the ‘voiceless’ masses like the Abami Eda did.

In truth, the Afrobeat genre has opened the way for many A-list artistes, including the likes of Wizkid, D’banj, Davido and Burna Boy, who are always quick to claim to be like ‘Baba Fela’. They perform on big stages, sampling the Afrobeat sound, lingo and lyrics to wow their audiences, but, more often than not, fail to pass messages like the late activist, or use their music as tool to lament the widespread suffering of the populace.

Ahead of Felabration 2017, an enthusiastic fan of the Abami Eda, @wondachild tweeted: “Today, our Afrobeat singers are pitching their tents with…politicians by releasing praise songs, just for their own benefits and not for masses #Felaliveson #Felabration2017.

“Irrespective of the lyrics, ‘political godfather’ steps to the tunes of Afrobeat without feeling guilty. They’ve forgotten the way Baba was mistreated. Fela struggle is still fresh my memory.”

Another twitter handle also posited; “For decades, Fela sacrificed everything to stand up for human dignity, he is the definition of ‘One Man Mopol’ who led revolution with his music”.

The questions many Afrobeat lovers ask is; ‘Why is Nigeria yet to have another Fela, or at least an artiste of his ilk? Why are our so-called Afrobeat singers unable to speak truth to the government instead of campaigning for them? Why have they refused to employ the Afrobeat sound in tackling issues affecting our society instead of praising Yahoo Boys and promoting mundane issues?’

Son of Afrobeat legend, Femi Kuti in an interview tells the story of his father; “Fela was born to a prominent Nigerian family. In 1969, his music took him to Los Angeles, where he was deeply influenced by the American civil rights movement. When he returned to Nigeria, Fela took up the fight against corrupt military dictatorship.”

Reminiscing on the struggle his father undertook, he continues; “In the 80s, Fela’s Kalakuta Republic house was burnt, he was arrested many times under the various military regimes and sentenced to prison for many years. His mother was thrown out of the window, and she died from that. After he was released from jail, Abami Eda still never gave up.”

Oscar-winning director, Alex Gibney speaks on his documentary film, “Finding Fela.” The film he said, he got inspired to create, partly because of Fela’s profound impact on other popular artists.

“Here was a guy who sat around his compound nearly naked, almost all the time, maybe a Speedo on, holding forth, usually with a huge number of women all around. But at the same time was going toe to toe with the military,” Gibney said.

His popular phrase is: ‘music is a weapon,’ in the sense that there’s no shield for the human heart.

“Once you imbue the spirit of that music, no matter how powerful the dictator, you can’t shatter that spirit,” said Gibney.

Many years after the death of the Afrobeat legend, few out of thousands of musicians who claimed Fela’s songs inspired them were not brave enough to criticise bad government.

A fan of Afrobeat music posited on popular blog, Nairaland; “Seun Kuti, Eedris Abdulkareem, African China and few others seem to be distinct among the rest. They are bold to follow the heroic struggle of Fela against bad government, an oppressive military dictatorship and self-leadership in Africa.”

In 2004, during the regime of former president, Olusegun Obasanjo, controversial rapper, Eedris Abdulkareem released his contentious single, Jaga Jaga, supposedly to protest the hardship people were facing. The song was banned from airplay after the president describes it as trashy and unpatriotic.

Another artiste who got the attention of the government with his song was Chinagorom Onuoha, popularly known as African China. The track, Mr President generated a lot of controversies.

The singer, while speaking on the motive behind releasing controversial songs said; “I have always been doing socially conscious songs and I wouldn’t relent. I have always been the mouthpiece of the Nigerian people and no matter how much I’m threatened, I wouldn’t stop. It is better for me to speak my mind and die because even if I don’t speak, I would still die.

“Many young artistes are scared of singing songs like that because they need the money and they fear that their patronage would reduce. I am not doing this for the money but for the people I’m serving. That is what Fela did and that’s why even in death, he stands out.”

The question however remains, when are we going to have another Fela? Or is it that the shoes he left behind are too big for anyone to fill?

Only recently, for selling out a show in London, hiphop singer, Wizkid was touted as the next Fela. But such a position does a great injustice to the Afrobeat legend and to the young singer. One of the many ways it does injustice lies in the fact that Wizkid is yet to release a socially-conscious track which is the bedrock of the Afrobeat movement.

Music: Timaya – Get My Money Right