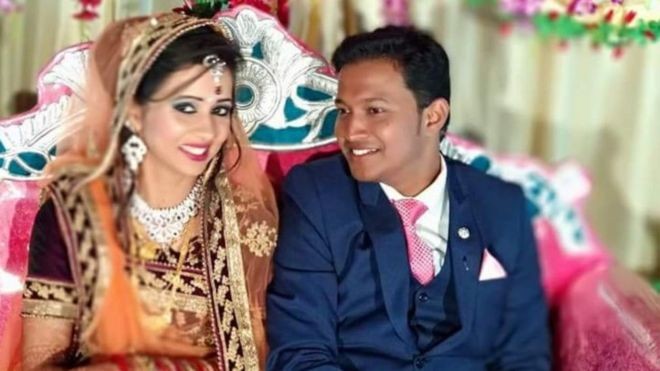 A “wedding bomb” that killed a newly-married software engineer and left his wife grievously wounded has shattered the peace of a small town in India. Nearly a month after the incident, the police have made no headway. Soutik Biswas travels to the eastern state of Orissa to piece together the story of a killing that has riveted India.

On a bright summer afternoon on 23 February, five days after their marriage, Soumya Sekhar Sahu, a 26-year-old software engineer, and his 22-year-old wife Reema, were pottering around in the kitchen at his newly-built family home in Patnagarh, a drowsy, nondescript town in Orissa.

They were planning to grill eggplant and make some lentil soup for lunch when Soumya heard the clanging of the latch of their metal gate. A delivery man stood outside, holding a parcel addressed to him.

A fraying sticker on the box said it had been sent by SK Sharma from Raipur, some 230km (142 miles) away.

Reema remembers her husband opening the box in the kitchen, and finding a parcel covered in green paper with a white thread sticking out of it, while his 85-year-old grand-aunt Jemamani Sahu came up from behind to see what the parcel contained.

“This looks like a wedding gift,” Soumya Sekhar told his wife. “The only thing that I don’t know is the sender. I don’t know anyone in Raipur.”

As he pulled the thread, there was a flash of light and a huge explosion rocked the kitchen. The three were knocked off their feet, and collapsed on the tiled floor, bleeding profusely. The blast had ripped the plaster off the ceiling, blown apart the water purifier, sent the kitchen window flying into an adjacent field, and cracked the green painted walls.

The three writhed in pain on the blood-splattered floor. Jeemamani Sahu was on fire. “Save me. I think I am dying,” Soumya Sekhar groaned before losing consciousness.

That was the last time Reema heard her husband speak.

The burns stung her face and arms. With smoke filling her lungs, she struggled to breathe. Her eardrum had punctured, so she barely heard the hum of panicky neighbours rushing in and asking whether the cooking gas cylinder had exploded. Her vision was blurring as debris clogged her eyes.

Still Reema managed to crawl to the bedroom, and pick up the phone to call her mother-in-law, a principal in a local college. She passed out before she could make the call.

Video footage from the house minutes after the blast shows distraught neighbours carrying away the three wounded residents in bed-sheets to a waiting ambulance. Soumya Sekhar and Jemamani Sahu, who both suffered from 90% burns, died as they were being moved to hospital. Reema is recovering slowly in a cramped room in the burns ward in a government hospital.

More than a month after the horrific murder, no one appears to have the faintest idea who killed Soumya Sekhar, described as a “genial and god fearing young man who worshipped a guru” by relatives and friends.

“We are simple people with simple lives. I have no enemies. My daughter has no enemies. My son-in-law had no enemies. I don’t suspect anybody, and I don’t know who could have done this,” Sudam Charan Sahu, Reema’s father, told me.

Their families had introduced them, and the two had been engaged for a little more than a year. Reema’s father, a garments trader, adopted her from his younger brother because he wanted a daughter after his two sons, and his brother had three daughters. The cheerful and pretty girl went to a local college and graduated with an Oriya language degree.

Soumya Sekhar’s parents were both college teachers – his father taught zoology. He had studied computer science and worked with info-tech companies in Mysore and Chandigarh, before joining a Japanese electronics firm in Bangalore two months ago.

“They met a few times before the marriage in presence of their families. They were a happy couple. Why would someone want to kill him?” Soumya Sekhar’s father, Rabindra Kumar Sahu, 57, said.

The only indication of something amiss seems to be one mysterious call that Soumya Sekhar received when he was in Bangalore.

“The call came last year,” Reema told me. “We were talking on the phone, and he said there was a call coming in. And I vaguely remember he put me on hold, and later told me, ‘I got a threatening call. A man on the line told me not to marry.'”

He didn’t mention any more calls, and by the time the marriage happened, “we had completely forgotten about the call”.

Two dozen investigators have questioned more than 100 people – friends and relatives of the couple mainly – in four cities in connection with the killing. They have scoured mobile phone records, and scanned laptops and phones belonging to the couple.

Hopes were raised when cyber sleuths found the parcel had been tracked online twice from a private computer institute in Kalahandi district, some 119km away, leading to speculation that the killer may have been following it. But eventually they found it was the courier company itself that had been tracking the consignment.

The only thing the police know for sure is that the parcel was sent from Raipur, under a false name and address. The killer, who paid 400 rupees ($6.14; £4.35) for the delivery, had chosen the courier company carefully: there were no CCTV cameras in their office, and the parcel was not scanned.

The parcel then made a 650km journey on three buses and passed through four pairs of hands before reaching Patangarh on 20 February. The delivery man made a run the same evening to Soumya Sekhar’s residence, but returned without delivering the package because “he saw a big marriage reception going on at the place”, Dilip Kumar Das, the local manager of the courier company, explained. Three days later, the man finally delivered the parcel at the gate.

Forensic experts are still trying to ascertain how sophisticated the bomb was. On the face of it, investigators say, it appeared to be a fairly crude device wrapped in jute thread which spewed white smoke after the blast.

The lack of strong leads means that the investigators are contemplating several motives behind the killing.

Was it the work of a spurned or scorned lover? The police still have no clue, but say they are investigating why Soumya Sekhar deleted his Facebook account weeks before his marriage and opened a new one.

Was the killing related to a property dispute in the Sahu family, where Soumya Sekhar was the only son and the natural heir? Investigators say they need to question more family members before coming to any conclusions.

Did the murder have anything to do with a feud that Reema had in her secondary school, when a classmate harassed her and her parents had to lodge a complaint with the principal? It seems highly unlikely because the incident happened nearly six years ago.

Also, how did the sender of the bomb manage to get his hands on an explosive and pack and send it to the target so easily? Was it a contract killing? “This is a fiendishly complex case,” Balangir’s senior police official Sashi Bhusan Satpathy said. “This was the work of a fairly knowledgeable person well-versed in the arts of bomb making.”

Reema is still in hospital, and her tragedy became a spectacle on Monday when a family member whipped out his mobile phone and recorded her breaking down after she discovered from an old newspaper in her room that her husband had been killed in the blast. For nearly three weeks, her family hadn’t broken the news to her. Now, she was crying inconsolably.

“You lied to me, you didn’t tell me the truth,” she wailed at her father, as he broke down. By the evening, the video of this private moment of grief was showing on local TV.

“We thought maybe this would move the government to step up the investigation and arrest the culprit soon,” her father said.