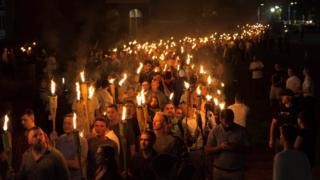 Hundreds of US white nationalists have rallied at the University of Virginia, protesting against plans to remove a statue of a confederate general.

The group waved torches and chanted “Jews will not replace us” and “white lives matter” as they marched through the Charlottesville university.

There were clashes with counter-protesters, while the local mayor condemned the march as racist.

A larger “Unite the Right” rally is planned in the city on Saturday.

The protesters are angered at the planned removal of a statue of General Robert E Lee from Charlottesville. Lee commanded forces of the pro-slavery Confederacy in the US Civil War.

Protest organiser Jason Kessler, who has previously accused the town of “anti-white hatred”, described the event as an “incredible moment for white people who’ve had it up to here and aren’t going to take it anymore”.

Demonstrators held lit torches – which some observers described as a reference to the Ku Klux Klan – and chanted “blood and soil” and “one people, one nation, end immigration”, local media reported.

The rally was met by a smaller group of counter protesters who had surrounded the university’s status of Thomas Jefferson, holding a banner that read “VA Students Act Against White Supremacy”.

Police had to intervene after a scuffle erupted between the two sides. One of the counter-protesters allegedly used a chemical spray on some of the marchers, the Washington Post reported.

The protest was criticised by many local residents and politicians. Charlottesville mayor Mike Signer called the march “a cowardly parade of hatred, bigotry, racism and intolerance”.

He wrote on Facebook: “Everyone has a right under the First Amendment to express their opinion peaceably, so here’s mine: not only as the Mayor of Charlottesville, but as a UVA [University of Virginia] faculty member and alumnus, I am beyond disgusted by this unsanctioned and despicable display of visual intimidation on a college campus.”

Charlottesville is considered a liberal college town – and 86% of the county voted for Hillary Clinton in last year’s presidential elections.

However, the town has become a focal point for white nationalists after the city council voted to remove a statue of General Lee.

Some observers also argue that US President Donald Trump’s election to the White House re-energised the far right across the US.

Last month, Ku Klux Klan supporters staged a march in Virginia – but were outnumbered by counter-protesters.