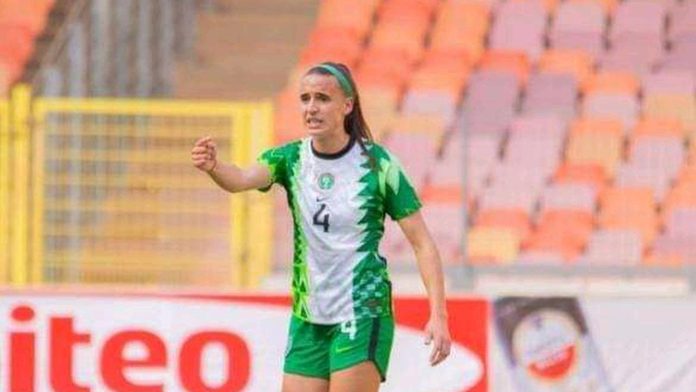 Ashleigh Plumptre has said the performance of the Super Falcons despite being two players down spoke to the character and quality of the team despite the defeat to Morocco in their semi-final clash at the 2022 Africa Women’s Cup of Nations.

Randy Waldrum’s side’s hope of winning a 10th African title was dashed by the host nation, who prevailed 5-4 on penalty shootouts.

The game ended in a 1-1 draw after 120 minutes of a thrilling contest.

Midfield lynchpin, Halimat Ayinde was sent off for a poor challenge three minutes after the break.

It was not long before Rasheedat Ajibade followed Ayinde to an early shower, for a similar dangerous tackle.

Despite the numerical disadvantage, the Super Falcons battled on and nearly scored the winning goal late in extra time through substitute Monday Gift, who hit the woodwork.

“I don’t think anybody can fault the players on the pitch for how we tried to fight,” Plumptre was quoted by ESPN.

“Even with nine players, for that amount of time, because it is not just the physical side, it is also the emotional and mental side, the frustration of having two players coming off.

“I am not going to comment on the decision, but that affects everybody on the pitch. Most of us were tired but we still put in a good effort.”

The Super Falcons will now play for the bronze medal against Zambia on Friday.