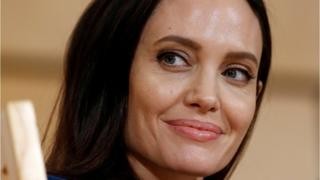 US magazine Vanity Fair says it is standing by an interview with Hollywood star Angelina Jolie which she has claimed misreported her.

The actress-director attracted criticism over her description of the casting process for her film about the Khmer Rouge.

She described how directors had played a game which involved giving money to poor children then taking it away.

Jolie has fiercely denied playing tricks on the children.

She said this week that “every measure was taken to ensure the safety, comfort and well-being of the children” and that the report was “upsetting”.

The film, First They Killed My Father, was directed by Jolie and is based on a true-life account of a survivor of the Khmer Rouge genocide. It is told through the eyes of a child.

In a statement on Thursday, Vanity Fair said it had been contacted by Jolie’s lawyer who accused the interviewer, contributing editor Evgenia Peretz, of “mistakenly” reporting about the audition.

The magazine said it was asked to remove the paragraph describing the casting process from Peretz’s report online, and run an apology and statement saying that the children were not tricked.

But Vanity Fair refused, saying it stood by Peretz’s story after reviewing audiotapes of the interview.

It also ran a section of the interview’s transcript. In it, Jolie says that she was not at the auditions herself, but that the casting team had told the children “a camera’s coming up and we want to play a game with you”.

“And the game for that character was ‘We’re going to put some money on the table. Think of something that you need that money for.’ Sometimes it was money, sometimes it was a cookie. [Laughter] ‘And then take it.” And then we would catch them.”

Shortly after the original report was published, Jolie was accused on social media of manipulating and emotionally abusing the children.

She responded earlier this week saying that “the suggestion that real money was taken from a child during an audition is false and upsetting”.

She added it was “a pretend exercise in an improvisation, from an actual scene in the film”, which was “written about as if it was a real scenario” in the magazine’s report.

First They Killed My Father is Jolie’s directorial debut for streaming giant Netflix.

Jolie told the BBC earlier this year that she hoped the film would help Cambodians speak more openly about their period of trauma.