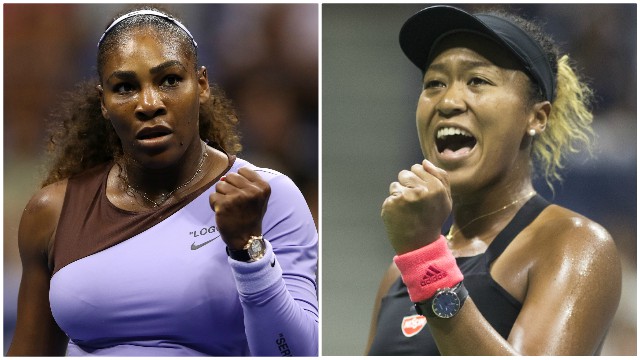 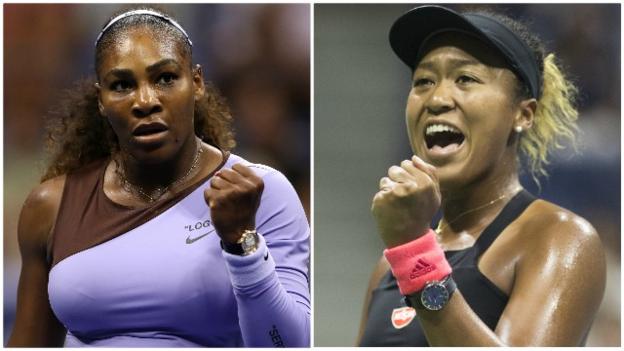 Naomi Osaka says she “always dreamed” she would play her idol Serena Williams in a Grand Slam final after both reached this year’s US Open decider.

“I shouldn’t think of her as my idol, just as an opponent,” said Osaka.

“When I was a little kid I always dreamed I would play Serena in a Grand Slam final. At the same time I feel like even though I should enjoy this moment, I should still think of it as another match.”

‘I love you Serena’

Osaka, who was aged just one when Williams won her first Grand Slam in 1999, is well-known for her entertaining interviews on the tour and in the past has discussed Netflix, memes and computer game Overwatch in news conferences.

After winning her first Masters title at Indian Wells earlier this year, she made what she described as “the worst acceptance speech of all time” – nervously saying her ‘thank yous’ before awkwardly lifting the trophy and posing for photographs.

Two years ago, she was asked a question about her career ambitions and responded by saying: “To be the very best, like no-one ever was.”

Realising she had caused confusion, she added: “That’s a Pokemon quote, I’m sorry. That’s the Pokemon theme song. But, yeah, to be the very best, and go as far as I can go.”

Osaka: This is going to sound really bad but I was just thinking I really want to play Serena.

Osaka: Because she is Serena. Like what do you mean?

Interviewer: What was going through your mind as you went to serve it out?

Interviewer: Perhaps a message for Serena?

Osaka: I love you.

How Osaka marched to the final

Osaka, who began the season as world number 68, steamrolled her way into her first Grand Slam semi-final with a 6-1 6-1 demolition of Ukraine’s Lesia Tsurenko.

And she saw off two Belarusians in the third and fourth rounds – demolishing Aliaksandra Sasnovich 6-0 6-0 before dropping her only set of the tournament in a 6-3 2-6 6-4 win over 26th seed Aryna Sabalenka.

The Japanese youngster broke into tears of joy following that win over Sabalenka but remained calm after her victory in the semi-final.

“I believe that Naomi is one of those individuals who really craves the big stage,” said her coach Sascha Bajin, who used to work with Williams.

The 20-year-old was born in Osaka, Japan and moved to New York aged three before relocating to Florida. Her father is Haitian and her mother is Japanese.

The dual-citizen says going to Japan feels like a “super-awesome vacation” rather than home, but will have the hopes of a nation behind her when she faces Williams.

By reaching the semi-finals alongside compatriot Kei Nishikori, it marked the first time that a male and female Japanese player had reached the final four in the same Grand Slam.

And Osaka will break into the world’s top 10 with victory in Saturday’s final – capping off a terrific year that started so well with the victory at Indian Wells in March.

On her way to that title in California, Osaka beat four seeded players, including world number one Simona Halep and fifth seed Karolina Pliskova, as well as five-time Grand Slam champion Maria Sharapova.

She also beat Williams in Miami in March – just two years after her first appearance at a Slam at the Australian Open.

She announced herself in New York last year when she caused an upset to knock out defending US Open champion and world number six Angelique Kerber in the first round.

Before reaching this year’s US Open final, Osaka’s best finish at a Grand Slam was in the fourth round of the Australian Open – she had never gone beyond the third round prior to that.

The view from Japan

She became famous in Japan especially after she won in Indian Wells – that was big news.

She is half Japanese and half Haitian-American so she doesn’t look typically Japanese but her name is very traditional Japanese. So that contrast between her looks and her name makes her even more charismatic to Japanese people. And the way she acts on court is very Japanese.

Japan is having a lot of typhoons and earthquakes so it’s not a time for the country to be very happy and excited about sport. But right after she won this match, I was getting text messages from friends back home saying ‘you’re in New York and Naomi just won!’ So based on that, I think people who are not always into tennis are interested in her.

Now she is famous in Japan. I think she is one of the most well-known female athletes now