US: ‘All options’ open on N Korea 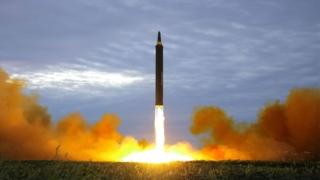 US President Donald Trump has said North Korea’s latest missile launch signals “contempt” for its neighbours and the UN.

He said the North would only increase its isolation and that “all options” were on the table.

The missile flew over northern Japan’s Hokkaido island before crashing into the northern Pacific Ocean.

According to KCNA, the North’s leader Kim Jong-un called the launch a “meaningful prelude to containing Guam”, a US overseas territory that Mr Kim has previously threatened.

The agency also said the launch was timed to land on the anniversary of the Japan-Korea treaty of 1910, which saw Japanese forces annex the Korean peninsula.

But the statement, which was unanimously agreed by all 15 members of the council, did not threaten new sanctions against Pyongyang.

President Trump, in a statement released by the White House, said the world had “received North Korea’s latest message loud and clear”.

“This regime has signalled its contempt for its neighbours, for all members of the United Nations, and for minimum standards of acceptable international behaviour,” he said.

“Threatening and destabilising actions only increase the North Korean regime’s isolation in the region and among all nations of the world. All options are on the table.”

Earlier this month, President Trump warned Pyongyang would face “fire and fury” if it continued to threaten the US.

Pyongyang has conducted a flurry of missile tests recently but this is the first time it has fired what is thought to be a ballistic weapon over Japan.

On the two previous occasions its rockets crossed Japan – in 1998 and 2009 – North Korea said they were for satellite launch vehicles, and therefore not weapons.

The latest launch appears to be the first of a missile powerful enough to potentially carry a nuclear warhead, says the BBC’s Rupert Wingfield-Hayes in Tokyo.

Russia’s deputy foreign minister, Sergei Ryabkov, said the use of sanctions and force to resolve the situation was “a path to nowhere; a path to catastrophe”.

He called on the North to halt its missile launches and on the US and its allies to avoid escalating military tension.

China also warned that tensions had reached a “tipping point” and said the US and South Korea were partly to blame.

As the missile soared over Hokkaido island, Japanese authorities issued a safety warning urging citizens to shelter in “a sturdy building or basement”.

Later, four South Korean fighter jets bombed a simulated target at a firing range in a drill – a show of strength ordered by President Moon Jae-in.

US and Japanese forces recently held a joint drill in Hokkaido while another annual exercise involving tens of thousands of South Korean and US military personnel is still under way in South Korea.

He said he had spoken to Mr Trump and they agreed to increase pressure on North Korea.

North Korea’s conventional and nuclear weapons programmes are a breach of UN resolutions.