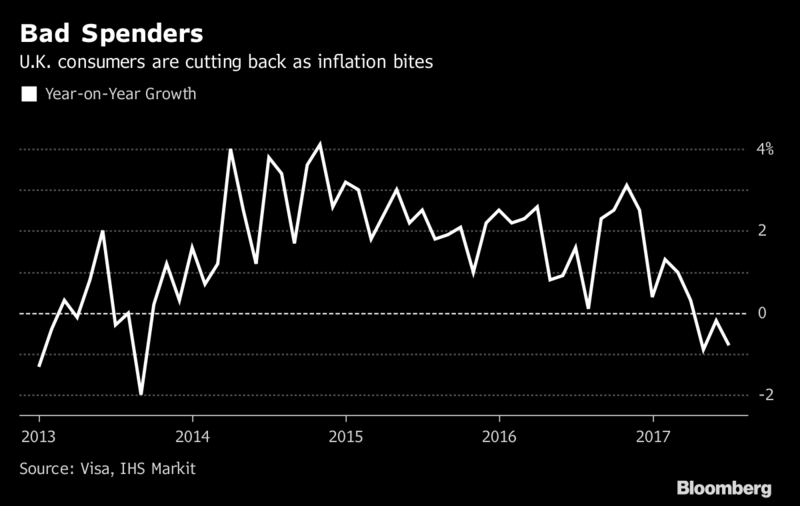 U.K. consumers cut back on spending for a third month in July, putting them in their worst slump in more than four years and dealing another blow to the economy at the start of the the quarter.

The 0.8 percent year-on-year drop in spending was broad-ranging, with clothing, household goods, food and transport among the worst hit, IHS Markit and Visa said in a report published on Monday.

The decline is being driven by a squeeze on pockets as inflation outpaces wage growth, as well as concerns among shoppers about the broader outlook after the economy slowed dramatically in the first half of the year.

The downbeat report comes days after the Bank of England downgraded its economic outlook and Governor Mark Carney warned that Brexit uncertainty is weighing on business and households. BOE Deputy Governor Ben Broadbent said Friday that the “maximum rate of pain” for consumers will soon pass, though any improvement could be modest. The central bank also cut its forecast for wage growth last week.

“Alongside the renewed squeeze on household budgets, uncertainties linger over the direction of the economy,” said Annabel Fiddes, an economist at IHS Markit. “This makes it seem unlikely that consumer spending will recover in the current challenging conditions.”

The July consumer figures showed a 6 percent increase in spending at hotels, restaurants and bars. Markit said this may be partly related to an increase in “staycations,” with the weaker pound making foreign holidays more expensive.