U.K. Economy May Be Even Weaker Than It Looks, Says UBS Model 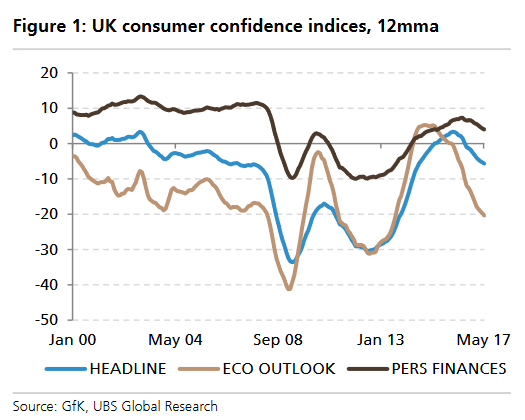 The U.K. economy may be even in worse shape than it looks.

That’s the message from UBS AG, which says it’s headed for near-stagnation. Economists led by Pierre Lafourcade at Switzerland’s largest bank said their new model strips out volatility in data to show growth has “softened substantially since the beginning of the year” and is headed “close to zero in the near future.”

While Purchasing Managers Indexes plunged immediately following the result of the Brexit referendum in June 2016 but then recovered, the UBS economists say their hard-data indicator has turned down more recently. “We put less stock in soft or survey data — emotions show up in surveys but the data are the data,” they said.

The U.K. statistics office will probably confirm expansion of 0.3 percent in the second quarter when it publishes a new GDP reading on Thursday, which will include details on consumer spending, investment and exports. The economy is forecast to expand 1.5 percent in 2017, a slowdown from last year’s 1.8 percent when activity proved unexpectedly resilient after the vote to leave the European Union.

Lafourcade said the “striking feature” in his index is its decline since 2014, the post-Brexit steadiness and subsequent drop, all of which are masked in the quarterly gyrations of reported GDP growth.

“On the basis of the factor’s recent trend, growth seems headed only in one direction — south,” he said.

The gloomy analysis comes days after a widely publicized report by a group of pro-Brexit economists, including Patrick Minford of Cardiff University, was criticized by peers for estimating that leaving the EU single market and customs union could add 135 billion pounds ($173 billion) to the U.K. economy and lower prices by opening up global free trade and spurring competition.

Monique Ebell of the National Institute of Economic and Social Research said that instead the U.K. stood to lose as much as 30 percent of its total trade.