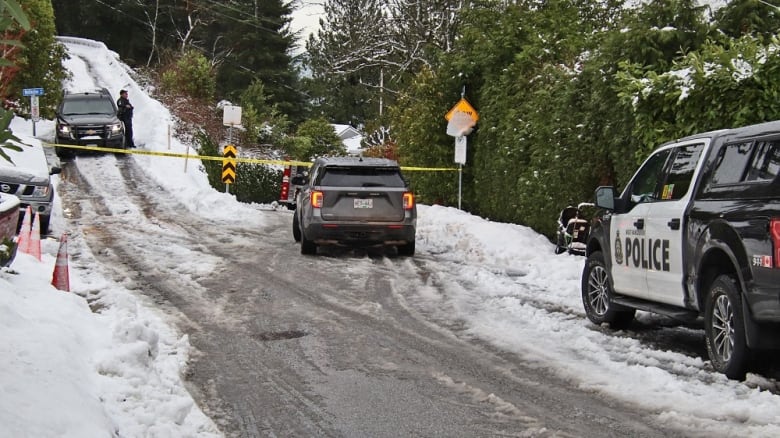 Two people have been killed after a tree fell on a house in Horseshoe Bay early Sunday.

Emergency crews arrived at 6200 block of Wellington Ave at 1:30 a.m. after a report of a large tree falling on houses in the West Vancouver neighbourhood.

The fatal incident has claimed the lives of a man in his 60s and a woman in her 50s, according to a press release from the West Vancouver Police Department.

“This appears to be a tragic accident,” says Const. Kevin Goodmurphy with the West Vancouver Police.

“Our thoughts are with the family and friends of the deceased.”

The B.C. Coroners office told CBC News they are in the early process of an investigation and have no additional information available at this time.

The uprooted tree also downed power lines and ruptured gas lines. Police say roads remain closed to traffic in the area and crews are working to remove the tree and debris.

In a social media post on Sunday, the West Vancouver Minor Hockey Association identified the two killed in the incident as former association president Mike Sharp and his wife Caroline Sharp.

“Mike was our goalie for our Wednesday night beer league”, Vancouver resident Patrick Hogan told CBC News on Sunday. In a tribute posted on Facebook, Hogan wrote that Mike played on his hockey team for more than two decades.

“Mike was the heart and soul of the dressing room, always ready with a smile and story from his and Caroline’s travels around the world,” Hogan said in his post.

The incident happened as strong winds swept Metro Vancouver over the weekend.

On Saturday, Environment Canada warned that a Pacific frontal system with strong winds of up to 70 km/h for East Vancouver Island and Metro Vancouver  was expected to ease overnight.

New wind warning are in effect for Sunday in areas of Richmond, Delta and South Surrey where winds are expected to reach 70 km/h with gusts reaching 90 km/h.

The strong winds are expected to ease Sunday night around midnight.