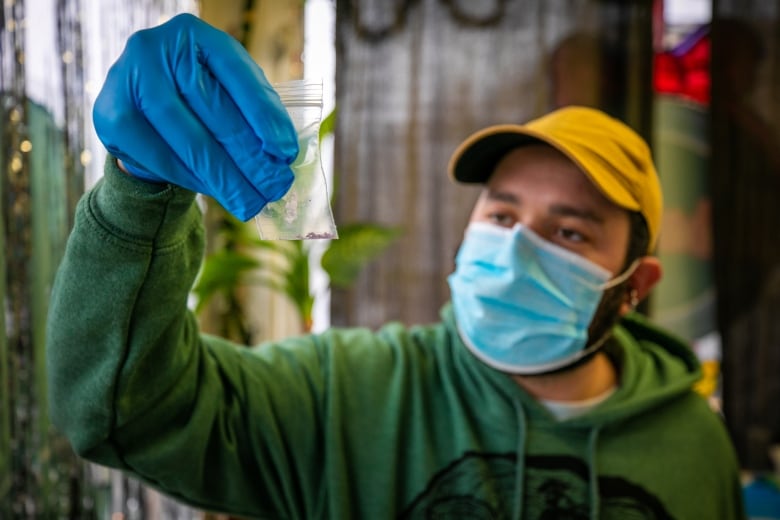 Within a fraction of a second, Speedy says he knew something was wrong.

In September, the longtime drug user, who didn’t want CBC to use his real name, unwittingly smoked fentanyl spiked with a benzodiazepine.

He says he seized up and just managed to make it to a safe space before he lost control of his body.

Benzodiazepine, which is typically prescribed as a sedative, is dangerous when paired with an opioid like fentanyl, because the sedation increases the risk of an overdose, according to Health Canada. Withdrawal symptoms can include extreme anxiety, sweats and dangerous seizures.

Worst of all, the lifesaving medication naloxone, which brings someone out of an opioid overdose, does not work on benzos.

Speedy, who works at the Overdose Prevention Society in Vancouver’s Downtown Eastside, says he’s seen the combination of the drugs become a “major problem.”

According to a report by the BC Coroners Service, “benzos” or “benzodope,” as it’s called in the street, is the new scourge of B.C.’s contaminated drug supply.

Some people are knocked out for hours or a whole day, and harm reduction sites say people passed out in a public place can be robbed or sexually assaulted while they’re unconscious.

Like fentanyl when it was first introduced, benzos started popping up randomly in drug checking and now it’s everywhere, says Sarah Blyth, the executive director of the Overdose Prevention Society.

“People completely black out, they don’t know who they are sometimes, where they are,” she said. “It’s leaving people with long-term damage, if they don’t die.”

Between July 2020 and October 2021, the detection rate of benzodiazepines in B.C. went from 15 per cent to 53 per cent, according to the BC Coroner Service’s Illicit Drug Toxicity report in December.

Fentanyl is still detected in an overwhelming majority of illicit drug deaths and drug samples, but the unpredictability and potency of these other substances are making the supply more dangerous, says the report.

Advocates for safe supply can only speculate why benzos are having such a moment in opioids right now, but Blyth puts it down to the unregulated supply, which continues to allow more unpredictability and volatility in the drugs.

“It’s just a mishmash of whatever’s under your kitchen sink,” she said.

Benzodiazepines exist in some of the most commonly prescribed medications. They’re often used as sedatives because of their ability to calm the brain, and are used to treat people with sleep, seizure or anxiety disorders.

Types of benzos can be found in medicines like Valium and Xanax.

But the danger for drug users is the combination of strong benzodiazepines with potent opioids.

It’s getting harder for harm reduction services to give users enough information to plan their drug use, says Karen McDonald, the lead for Toronto’s drug checking service, which operates out of St. Michael’s Hospital.

She said they’ve found 13 different types of benzos in Ontario, and some aren’t even prescribed in Canada.

“It’s consistently changing. We feel like we can’t keep up with how many new drugs are coming in and out.”

It’s been one year since Dean Wilson took opioids spiked with a benzodiazepine. The former drug user and co-founder of the Vancouver Area Network of Drug Users (VANDU) says he didn’t realize he’d inadvertently taken benzos until he was coming down off the drugs.

He didn’t sleep for six days.

Many drug users are unknowingly ingesting benzos, says Dr. Paxton Bach, a medical director at the British Columbia Centre on Substance Use (BCCSU). He describes it as a “nightmare.”

The mystery is especially concerning when a person is withdrawing from benzos. Detoxing from these substances is dramatic and, unlike fentanyl withdrawal, patients must be monitored in a hospital setting, Bach says.

The way the body becomes dependent on the substance over time means the brain is unable to function without it, Bach says. Tremors, sweats, nausea, extreme anxiety and even seizures form part of the dangerous withdrawal.

“Anyone who uses drugs daily now is going to have benzos in their system. The question is, how much, what kind?”

While visiting a drug-checking site in Victoria, B.C., recently, CBC watched an attendant scrape an unknown powder into a small paper cup and pour it into a plastic tube. Methanol was added to dilute the substance and a skinny paper strip was inserted.

A few minutes later, the opioid sample was confirmed to contain benzos.

It’s the norm that most opioids tested in Victoria will include a benzodiazepine, says Bruce Wallace, who works with the Victoria Drug Checking Program and is an associate professor at the University of Victoria’s school of social work.

What drugs are safe to consume and in what amount — these are the questions they try to solve with costly lab equipment. But he says even that can be difficult.

“To have an opioid with a benzodiazepine, and having a whole range of benzodiazepines … [it’s] challenging to try to figure out what does that really mean to somebody using that substance,” said Wallace.

For drug users like Jarret McConnell, knowing what’s in his drugs is a lifesaver.

He had the drugs in his pocket tested by a facility in Vancouver and told CBC they were found to contain 15 per cent fentanyl and six per cent benzodiazipines, among a range of other ingredients.

He says the amount of benzos in the drugs doesn’t concern him, because he buys them from the same dealer every time. Even so, he admits the increasing potency and unpredictability is worrying.

“That scares me and I don’t want to be sent back to where my mum is … where she has to see me with a toe tag over a benzo overdose,” he said. “I don’t want that.”