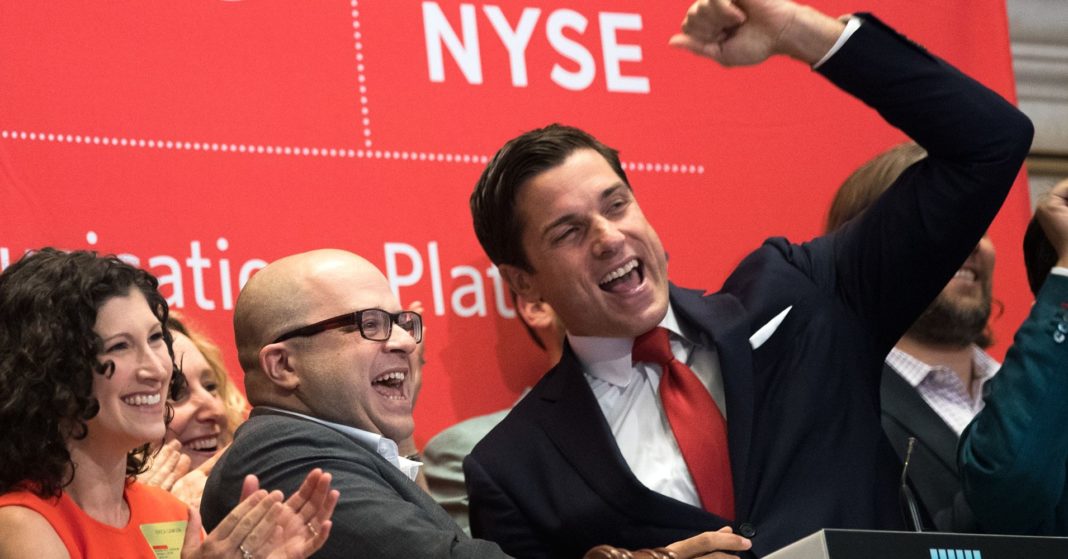 In a year that’s featured the high-profile market debuts of Dropbox, Spotify and DocuSign, as well as numerous multibillion-dollar software acquisitions, one of the most lucrative deals was the decision by Bessemer Venture Partners to hang onto its Twilio shares.

Twilio, whose software powers the communications systems used by Airbnb, Salesforce and Nordstrom, went public in mid-2016. But 2018 will go down as the year that the company truly resonated with investors.

As of Thursday’s close, the stock is up over 300 percent for the year, more than three times the gain of the best-performing stock in the S&P 500. (Among this year’s venture-backed tech IPOs, the biggest gainer is security company Zscaler, which is up 162 percent from its debut price in March.)

Venture capital firms like Bessemer get paid to bet on tech start-ups, with the hope that their best picks go public or get acquired for many multiples of the amount they invested. Insiders are typically locked up from selling after an IPO for six months, but then start to unload their stake, dispersing the shares over time to limited partners or selling them and returning the cash.

Bessemer has sold about half its stake in Twilio. But hanging onto the other half for an unusually long period of time has paid off handsomely for the 107-year-old firm, whose other big wins include LinkedIn, VeriSign, Skype and Yelp.

The Twilio investment had an added twist this year. Bessemer was one of the biggest outside investors in SendGrid, which Twilio agreed to buy in October for $2 billion in stock. At the time the deal was announced, Bessemer still owned almost 90 percent of its SendGrid stake.

Taken together, Bessemer owns close to $1.2 billion worth of stock in Twilio and SendGrid even after selling hundreds of millions of dollars worth of shares to date, according to the latest public filings. That’s all from an investment of a little over $100 million that Bessemer put into the two companies, beginning with its seed investment in Twilio in 2009.

“In situations where a business is still growing very comfortably and we don’t think it’s wildly overvalued, we can take a pretty patient and measured path out of it,” said Byron Deeter, a Bessemer partner who’s on the boards of Twilio and SendGrid and recused himself from the deal. For Twilio, “when the stock was particularly beaten up in the market with business model questions and people more pessimistic on its future, we were comfortable pausing any selling and taking a very long-term approach.”

In referring to Twilio’s struggles on the market, Deeter is pointing back to May 2017, when CEO Jeff Lawson told investors on an earnings call that Uber was going to be reducing its reliance on Twilio’s technology. At the time, Uber accounted for 12 percent of Twilio’s revenue, using the software to connect drivers and passengers and for other initiatives, but Lawson said the ride-hailing company was moving to a “more active multi-sourcing platform.”

Twilio plummeted 26 percent on the news to $25.01. The stock didn’t start to recover until February of this year and has since been on a tear, outperforming all of its software peers. It closed on Thursday at $95.97.

“That’s a pretty unique company in the market,” Deeter said. “Investors finally have confidence that they understand the model.”

While Deeter had to stay out of the Twilio-SendGrid talks to avoid any potential conflict, he later learned that he was in the room when a critical conversation between the CEOs took place.

On May 22, Bessemer hosted a dinner for seven portfolio companies and about 10 members of the press at Boulettes Larder in San Francisco’s Ferry Building. Deeter was there to schmooze and enjoy the menu, which included hors d’oevres, seasonal salad, duck, chocolate truffles and wine.

Lawson was in attendance along with SendGrid CEO Sameer Dholakia and CEOs from Intercom, Periscope Data and Shippo. According to an SEC filing last month, Lawson and Dholakia had a private meeting at the dinner to discuss “the possibility of resuming discussions regarding a possible acquisition of SendGrid by Twilio.” Dholakia said at the time that his board would be open to it, though getting the deal done “would depend on price and other terms,” the filing said.

“I literally didn’t know the deal was happening,” Deeter said.

Lawson and Dholakia had been discussing a potential tie-up since September 2017, and SendGrid’s board had rejected a $750 million offer in October, calling the bid inadequate. Twilio also received interest from a private equity firm around that time. By May 2018, the price was much higher and, after the dinner in San Francisco, the two companies spent the next five months hashing out a deal, according to the filing.

“The key takeaway from the filing is that Twilio has been acutely interested in acquiring SendGrid for the past year, and offered or raised its offer to acquire the company seven times, despite there being just one other bidder,” wrote Patrick Walravens, an analyst at JMP Securities, in a report on Nov. 26.

With Twilio trading at such lofty levels and with economic and market volatility on the rise, Bessemer has to consider how much of a run is left in the stock as the calendar turns.

Deeter said the firm has an internal liquidity committee that includes people who came to venture capital from Wall Street. In addition to that expertise, Bessemer has deep insights into how subscription software companies trade because it created the Bessemer Cloud Index, consisting of 46 publicly-traded cloud software vendors. So it can clearly see how investors are valuing comparable companies based on their growth rate, profitability and efficiency.

It’s a high bar to justify holding the stock.