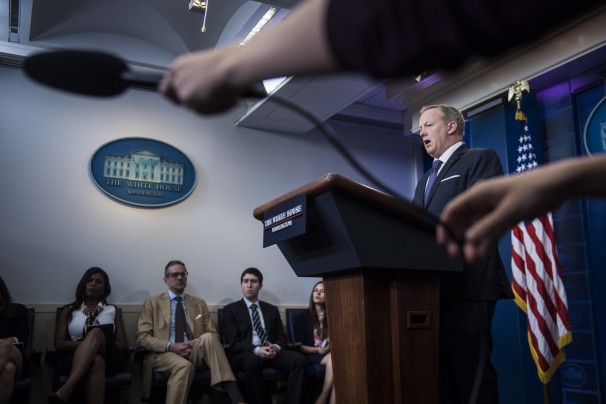 President Trump faces an increasingly narrow path to win major legislative victories before the looming August recess, with only two months left to revive his health-care or tax initiatives before Congress departs for a long break.

White House officials said Tuesday that Trump has become increasingly incensed that legislation is bogging down in the Senate, something they blame on Democrats. Trump wrote on Twitter that the Senate should change its long-standing rules and “switch to 51” votes to pass health-care changes and to vote on a tax bill instead of working to get 60 votes to end a potential filibuster.

But the Senate is already trying to pass health-care and tax changes with just 51 votes, something it is unable to do because of splits within the GOP.

“The hardest thing now is figuring out what can get 51 votes in the Senate,” said Stephen Moore, who was a top economic adviser to Trump during the campaign and who has urged the White House to move more quickly.

Congress also faces an increasing number of legislative distractions that could further imperil Trump’s agenda. There is a big divide among Republicans over whether they can vote to pass a budget resolution in the coming months, and failing to do so could make it much more difficult to change the tax code. In addition, White House officials are now demanding that Congress vote to raise the debt ceiling before the August break — pressing members to take a difficult vote before they head back to their districts.

Trump’s frustration comes as the White House is increasingly consumed by internal tumult and controversies. Communications director Michael Dubke announced his resignation Tuesday, while Trump and his aides worked to deflect questions about whether his son-in-law, Jared Kushner, inappropriately worked to establish a back channel for talks with the Russian government during the transition.

Given these distractions, White House officials and top Republicans had hoped that an ambitious legislative agenda could stabilize the presidency heading into the August break.

White House officials plan to push Senate Republicans in June to vote on a repeal of the Affordable Care Act, and they want to spend the rest of the summer whipping up support for major tax cuts. They are also planning to push lawmakers soon to consider an infrastructure package, although that effort has also moved more slowly because his staff hasn’t put together a final plan.

Each of these efforts has stalled either in the White House or in Congress, but Trump has pinned much of the blame on Senate Democrats. White House press secretary Sean Spicer said the president’s “frustration” was that the White House’s big-ticket items have bogged down because of Democrats’ ability to block measures using filibuster rules. Republicans control 52 of the Senate’s 100 seats, requiring them to get support from Democrats on many issues.

“Part of the reason that he is frustrated with the Senate rules is because when there is a majority of support on key issues — or key people, as the case was in the confirmation process — he thinks it’s standing in the way of progress that the American people have asked for,” Spicer said.

But critics from both parties have said the lack of progress is a reflection in part of Trump’s inability to marshal votes or persuade lawmakers to follow his lead.

Trump “is the least policy-aware, policy-knowledgeable, policy-driven president that I can remember, maybe that we’ve ever had,” said David Boaz, executive vice president of the Cato Institute, a libertarian think tank. “Most of the Republicans do have some kind of coherent framework through which they see things.”

To pass an overhaul of the tax code with just 51 votes, lawmakers must agree on a budget resolution, which could be a difficult task for a divided GOP.

Republican leaders in Congress are unsure how they will do this because of stark differences within the GOP over whether to prioritize defense spending or deficit reduction. The procedural vote is crucial because it would pave the way for them to need only a simple majority — instead of 60 votes — to pass comprehensive changes to the tax code.

[Sean Spicer returns with a press briefing for the ages]

In a private meeting of House Republicans this past Thursday, numerous members warned about the strict budget caps that would decimate defense spending starting in the fall. Those caps cannot be lifted unless Republicans strike a deal with Senate Democrats, who in past negotiations have demanded increases in nondefense spending.

Complicating matters further, Treasury Secretary Steven Mnuchin has told Congress that he wants the debt ceiling to be raised before the August recess, a move that would force uneasy Republicans to take a gut-wrenching vote opposed by many hard-line conservatives.

Top Trump administration officials — including Mnuchin, Office of Management and Budget Director Mick Mulvaney and White House National Economic Council Director Gary Cohn — are expected to come up with a strategy soon for how to handling the looming debt-ceiling vote.

The federal government spends more money than it brings in through revenue, and it covers the difference by issuing debt to essentially borrow the money. It can only borrow money up to a certain level set by Congress. There are several ways to measure government debt, but debt subject to the limit is now essentially $19.8 trillion.

In 2015, President Barack Obama and Congress agreed to suspend the debt ceiling until mid-March, and now the Treasury Department is suspending certain payments to allow the government to continue paying its bills until Congress can agree to raise or suspend the limit again.

If Americans pay taxes at a slower rate than expected — and there are signs that this is happening now — the government could run out of money sooner than anticipated, a quandary that has forced Treasury to push for a vote by August.

Lawmakers will only be in Washington for seven more weeks before the August recess, and Senate Republicans are not close to an agreement on the actual bills they might debate regarding taxes, health care or the debt limit.

Each of the past five presidents enacted legacy-defining legislation during their first seven months in office, something Trump has yet to do.

“This is a president who knows very little, who reads almost not at all, and who is indifferent to details, which is what legislation is all about,” said Rep. Gerald E. Connolly (D-Va.). “And translating some broad idea into legislation requires a certain amount of attention and legerdemain this man simply does not possess, and at 70, he’s not going to develop it.”

Rep. Charlie Dent (R-Pa.), a senior House appropriator, said he doubts whether Republicans alone can pass a debt-ceiling increase and urged Trump and congressional leaders to spend June and July negotiating a deal with Democrats that would extend the debt limit, set new spending numbers and possibly extend the Children’s Health Insurance Program, whose funding lapses on Sept. 30.

That, Dent said, would “open up time and space” to deal with meatier policy issues such as health care and taxes later. But until the fiscal issues are resolved, he said, “You have no choice.”

The scramble by the White House comes after four months of false starts and distractions. Republicans won confirmation of a Supreme Court justice and Congress has voted to roll back numerous regulations, but the three key planks for their domestic agenda — health care, taxes and infrastructure — have stalled.

A revised health-care bill narrowly passed the House, but Senate Republicans have signaled that they want to start from scratch.

On taxes, the White House issued a one-page blueprint for overhauling the tax code but provided no new ideas or details when it unveiled its budget plan last week. Trump, in a Monday Twitter post, also claimed the tax effort was “actually ahead of schedule.”

The tax overhaul effort is actually behind schedule: Mnuchin pushed for it to be passed by the August recess, but lawmakers have not advanced a tax bill through a House or Senate committee.

To win more support, some lawmakers are considering dramatically scaling back Trump’s tax cut plan, people briefed on the discussions said. Trump has proposed lowering the corporate tax rate from 35 percent to 15 percent, but Republicans could pursue a tax rate that’s somewhere in the middle.

One reason Senate Republicans have not unified behind a central plan on health care or taxes is because top White House officials — including Trump — do not seem to be in lockstep on the issues.

Trump wrote in a Twitter post Sunday night that “we [should] add more dollars to Healthcare and make it the best anywhere.” But several days before, he proposed cutting between $800 billion and $1.4 trillion in future spending on Medicaid, the health care program for low-income Americans. Spicer would not say on Tuesday where Trump wanted to add more money to health care.

“We’ve got a pretty bold agenda,” Spicer said. “He’s still pushing hard on health care. Infrastructure is a priority of his. So the president’s legislative agenda is in full swing.”

Philip Rucker contributed to this report.