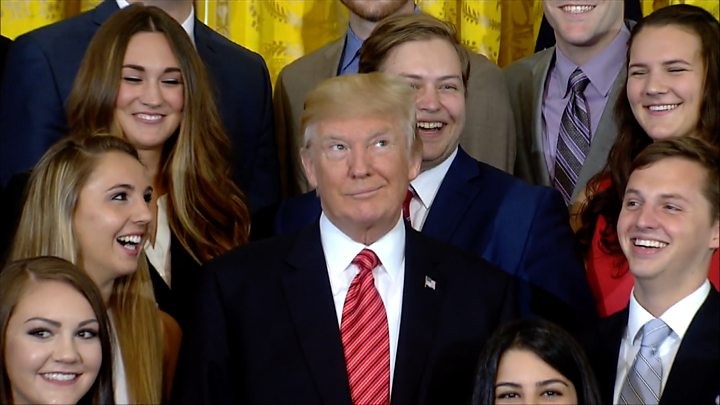 President Donald Trump has launched yet another attack on US Attorney General Jeff Sessions, labelling him “weak”.

His latest Twitter onslaught comes amid reports the president is consulting advisers about possibly firing the country’s top prosecutor.

On Monday, he called Mr Sessions “beleaguered” in another tweet.

Mr Trump has made clear he is unhappy with Mr Sessions for recusing himself from an FBI inquiry into alleged Russian meddling in the 2016 election.

Moments earlier he questioned in another post why Mr Sessions was not looking into a report earlier this year that officials in Ukraine had sought to influence last year’s US presidential election in favour of Mr Trump’s Democratic rival.

The Washington Post reports that Mr Trump has asked an adviser how firing Mr Sessions would be received in the conservative media.

Anthony Scaramucci, the president’s new communications director, fanned speculation on Tuesday that the attorney general’s days could be numbered.

Analysis: No one is safe

Like some sort of medieval torture device, the political pain applied to Attorney General Jeff Sessions is steadily increasing – and Donald Trump is behind it all, turning the screws.

After months of hints in the media that he wasn’t happy with his attorney general, the president said last week that he wished he had never appointed his close campaign confidant. He then tweeted that the man was “beleaguered” and finally called him out by name as “very weak” in a latest round of tweets.

Mr Trump is apparently unhappy that his attorney general allowed the Russia investigation to morph into the ever-expanding independent counsel probe. And with each new revelation of the investigation’s growing reach, the president has reacted more aggressively.

Last week’s Bloomberg story that Robert Mueller and his team of veteran prosecutors are looking into the president’s business dealings have been followed by this week’s presidential Twitter tirades.

The campaign to undermine the attorney general could come at a high price, however. Reports circulate of an administration constantly looking over its shoulder. If the president can turn on Mr Sessions, the thinking goes, no one is safe.

Mr Sessions was in the West Wing on Monday, but did not meet with the president, according to deputy press secretary Sarah Huckabee Sanders.

The attorney general has recently asked White House aides if he can meet Mr Trump to resolve their fallout, reports AP news agency.

But Mr Scaramucci said on Tuesday: “My guess is the president doesn’t want to do that.”

New York Times White House correspondent Maggie Haberman tweeted that she had asked two people close to Mr Trump why he is tormenting Mr Sessions instead of firing him.

She said they told her: “Because he can.”

Last week, Mr Trump expressed regret about appointing the former Alabama senator to be top US prosecutor, telling the New York Times Mr Sessions “should have never recused himself”.

It was reported on Monday that the president was considering replacing Mr Sessions with former New York Mayor Rudy Giuliani.

But Mr Giuliani told CNN on Monday that Mr Sessions had “made the right decision under the rules of the Justice Department” in recusing himself from the inquiry.

Mr Sessions, known for his hardline anti-immigration stance, was one of then-candidate Mr Trump’s earliest supporters in Washington.

But in March he recused himself from the Russia inquiry after failing during his confirmation hearing to disclose a meeting with the Kremlin’s envoy.

If Mr Trump were to fire Mr Sessions, Deputy Attorney General Rod Rosenstein would take over the job on an acting basis.

Mr Trump has also been sharply critical of Mr Rosenstein for his handling of the Russia inquiry.

Some commentators suggest Mr Trump’s ultimate target is Robert Mueller, the special counsel who is leading the Russia investigation.

Mr Sessions said last week he intended to stay in his post.

“I’m totally confident that we can continue to run this office in an effective way,” he said.

Meanwhile, Mr Trump also appeared to suggest on Tuesday morning that the acting director of the FBI, Andrew McCabe, was corrupt.

The president appeared to be referring to nearly $500,000 which Clinton ally and Virginia Governor Terry McAuliffe’s political action committee donated to the Virginia state senate campaign of Dr Jill McCabe.