Trump Floats Third-Party Threat If GOP Won’t Back Him 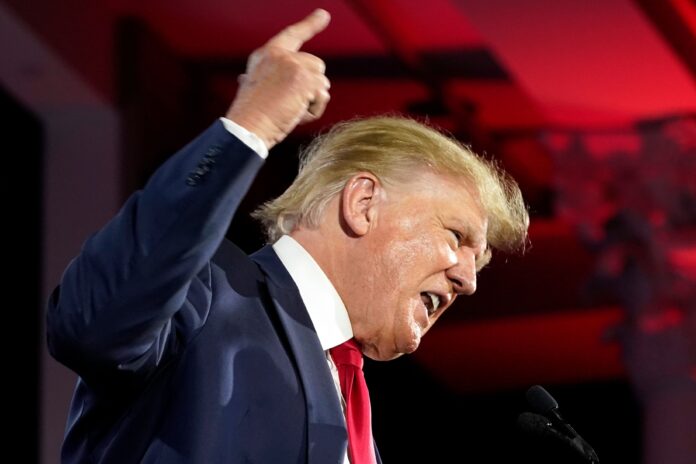 Donald Trump has floated the idea of running a third-party campaign if increasingly disgruntled Republican leaders don’t get behind his run for the presidency.

Trump signaled the possibility by posting an article on Truth Social Wednesday promoting just such an option.

Bizarrely, the author of the article in the right-wing journal American Greatness, believes such a move would torpedo Trump’s chances to win the White House. But it would also wipe out Republican hopes, which would be a deserving punishment for rejecting the popular former president, writer Dan Gelernter indicated in his piece entitled “The Coming Split.”

He claimed that the “Republican machine has no intention of letting us choose Trump again: He is not a uniparty team player. They’d rather lose an election to the Democrats, their brothers in crime, than win with Trump.”

He asked: “What should we do when a majority of Republicans want Trump, but the Republican Party says we can’t have him? Do we knuckle under and vote for Ron DeSantis because he would be vastly better than any Democrat? I say no, we don’t knuckle under.”

Trump has flirted before with the idea of a third party — and apparently largely out of vindictiveness.

ABC White House correspondent Jonathan Karl wrote in his book “Betrayal: The Final Act of the Trump Show” that Trump once told Republican National Committee chair Ronna McDaniel that he was “done” with the GOP and was starting his own party.

McDaniel reportedly warned him: “You cannot do that; if you do, we will lose forever.”

He responded: “Exactly — you lose forever without me. I don’t care. This is what Republicans deserve for not sticking up for me.”