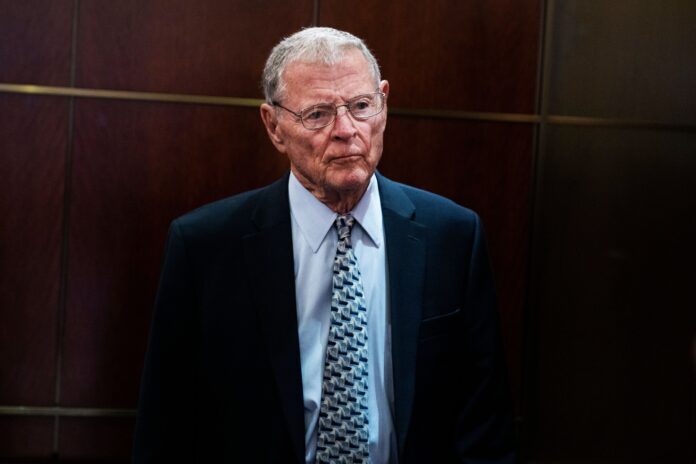 Search for Jim Inhofe on Google, and you’ll immediately see pictures of the Republican senator from Oklahoma proudly holding a snowball on the floor of the U.S. Senate.

Inhofe’s career in elected office spans nearly six decades, but the snowball is perhaps his most famous stunt — one of pure, unabashed climate idiocy that will follow him long after he vacates his senate seat.

Inhofe, 87, will retire in early January after nearly three decades in the Senate. He leaves behind a legacy of climate denial that might be laughable if it weren’t so embarrassing and dangerous. There are few members of Congress who have done more to sow public doubt about the mounting, deadly impacts of fossil fuel-driven planetary warming, or to block policies and regulations meant to confront the threat.

It was late February 2015 and snow had blanketed Washington, D.C. Speaking on the Senate floor, Inhofe produced a snowball from a plastic bag — proof, he argued, that global warming is not real.

“We keep hearing that 2014 has been the warmest year on record,” he said, gripping the softball-sized chunk of frozen water. “You know what this is? It’s a snowball, that’s just from outside here. So it’s very, very cold out. Very unseasonal.”

“Here Mr. President, catch this,” Inhofe said, tossing it to the sitting Senate president. The senator spent the next 20 minutes doing what he’s done his entire career: peddling the sort of climate disinformation that would make his fossil fuel industry donors blush.

Inhofe’s views go far beyond skepticism about the magnitude of the global threat. He’s dismissed global warming as “the greatest hoax ever perpetrated on the American people” and called for climate scientists to be criminally prosecuted. He’s accused the Environmental Protection Agency of “brainwashing our kids” with “propaganda” about climate change. And he’s characterized carbon dioxide — the main driver of planetary warming — as nothing more than “a form of fertilizer to grow things.”

In his 2012 book about climate change, titled The Greatest Hoax, he wrote, “[T]his is what a lot of alarmists forget: God is still up there, and He promised to maintain the seasons and that cold and heat would never cease as long as the earth remains.” As the longtime former chairman of the powerful Senate Environment and Public Works Committee, he made a habit of calling the most prominent climate contrarians as expert witnesses.

Inhofe continued to shamelessly carry the torch even after many fossil fuel interests began to distance themselves from outright climate denial.

“There is no proof that President Biden’s climate fantasy is real,” he said in a video posted to Twitter in July.

Now, according to the Biden admin, the sky is falling and the only way to solve it is to throw more money at liberal climate policies.

Let’s get back to policies that actually help the American people, not hurt them. pic.twitter.com/UiAi8P8zOG

For his efforts, the oil and gas industry rewarded Inhofe mightily. Over his long career in Congress, first in the House and then the Senate, oil and gas interests donated a whopping $2.32 million — more than any other industry, according to data compiled by OpenSecrets.com. Only eight members of Congress have received more fossil fuel money.

Like other seasoned deniers, Inhofe is a master cherry picker. When convenient, he conflates weather and climate to make his argument — the snowball stunt being a prime example. He parrots the favorite climate denier talking point that “the climate is constantly changing,” ignoring an undeniable mountain of research about the cause and speed of the current crisis. And he casts aside the work of reputable climate scientists around the globe while spotlighting an increasingly fringe group of contrarian scientists.

Inhofe has been described as “the original climate-denier in chief” and “one of the world’s most vociferous climate skeptics.”

In his farewell speech last month, Inhofe touted his efforts to chip away at climate action and environmental protections.

“It’s no shock to anyone that The Washington Post has dubbed me public enemy No. 1 for the radical environmentalists for decades now,” he boasted. “For much of my time in the Senate, I was the chair and ranking member of the Environment and Public Works Committee. Throughout that time, I pushed back against the Obama administration’s far-left policies that sought to upend the lives of Oklahomans, like the Paris Climate Agreement, the Waters of the U.S. Rule, the Clean Power Plan, and many others.”

“These policies were really about giving Washington bureaucrats sweeping control over the lives of millions of Americans,” he said. “We are debating a lot of these same issues today, and I expect these disagreements will continue long into the future.”

Climate change is a long settled scientific fact. But thanks in no small part to Inhofe, Americans will be forced to continue sifting through a mountain of climate misinformation and disinformation.

“I want to take a second to say thank you to all of my current and former staff. They are hanging around out here now,” Inhofe said during his farewell address. “I lovingly call my former staff the ‘has-beens.’ It is somewhat of a mark of honor. To all of you, thank you, you’re all about to be has-beens.”