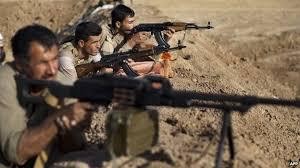 The Syrian Democratic Forces, SDF, a Kurd-led coalition allied with the U.S., seized the Koniko field in Syria’s eastern province of Deir al-Zour, according to the Syrian Observatory for Human Rights.

Islamic State militants were trying to recapture the field by carrying out counter-attacks, the watchdog added.

The SDF said in an online statement said that its forces had seized Koniko after they had besieged Islamic State fighters for two days.

SDF fighters are vying with Russia-backed government forces to capture Deir al-Zour, an oil-rich region that has been under Islamic State control since 2014.

In recent weeks, the SDF and the Syrian forces have each claimed gains against the radical group in Deir al-Zour, which borders Iraq. (dpa/NAN)