Truck Driver Says Giving Away Plywood in Irma’s Path Got Him Fired: ‘I Was Just Being an American’ 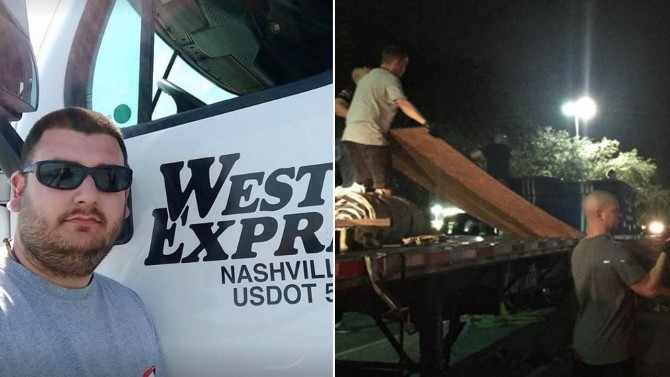 Truck driver Tim McCrory says he knew that giving away his load of plywood during Hurricane Irma would get him fired.

But he did it anyway.

“I went into it knowing I was going to lose my job,” he told InsideEdition.com Thursday night. “Because I was giving away something that wasn’t mine. But the people in Florida needed it to protect their homes.”

Read: The Delta Flight That Raced Hurricane Irma – and Won

The long-haul driver was ferrying 960 pieces of plywood to a Home Depot in Zephyrhills, Fla., on Friday.

He blew a tire in a southbound lane of Interstate 95, as seemingly everyone in the state was on the northbound side, trying to get out as Irma churned toward Florida.

It took seven hours to get the tire fixed, he said. When he pulled into the Home Depot lot, it was past 9 p.m. and the store was closed and boarded up to ride out the storm. The night manager was just leaving, McCrory said, and told him he would have to come back Tuesday.

So the driver called his company’s dispatcher and delivered the news. He was told to take his load to Atlanta, he said. He decided to catch a few hours’ sleep in his cab.

He was awakened about 2 a.m. Saturday by a police officer banging on his window. McCrory says he explained the situation. The cop said taking the rig to Atlanta was not a good idea. There are a lot of people in town needing this plywood, the officer said.

About 20 officers and McCrory began unloading the unwieldy sheets by hand at about 2:30 a.m., he said. Police department employees contacted residents by phone in the suburban enclave outside Tampa.

“They said ‘If you need plywood to board up your house, come and get it. It’s a small town and everybody knows everybody. They got the word out,” McCrory said. “There was just a line of cars. The storm was coming and it was coming fast.

“The wind was starting to pick up, you could see the clouds swarming, and it was just an eerie feeling,” he said.

For nearly four hours, with nary a cross word or pushing or shoving, the plywood was handed out to residents. “Nobody took more than they needed,” McCrory said. “We protected about 150 houses.”

Resident Tracy Dillon Drew established a GoFundMe page for McCrory when she learned he had lost his job.

Read: Woman Delivers Her Own Baby During Hurricane Irma After Authorities Can’t Reach Her

“I cannot explain the sense of community I felt with those of us who were lucky enough to not just receive plywood, but (to) also receive a much more important gift … compassion.”

Drew wrote she has kept in contact with McCrory since he left Florida and started the fund to help him as he looks for a new job.

McCrory said he informed his superiors about giving away the wood and was told “We’re going to have to let you go.’  I told them ‘There was a Category 5 hurricane coming. Home Depot was closed. People needed that plywood.’’’

“They said it wasn’t mine to give away,” he said.

“I was just being an American,” he said. “And I was trying to be a good American.”