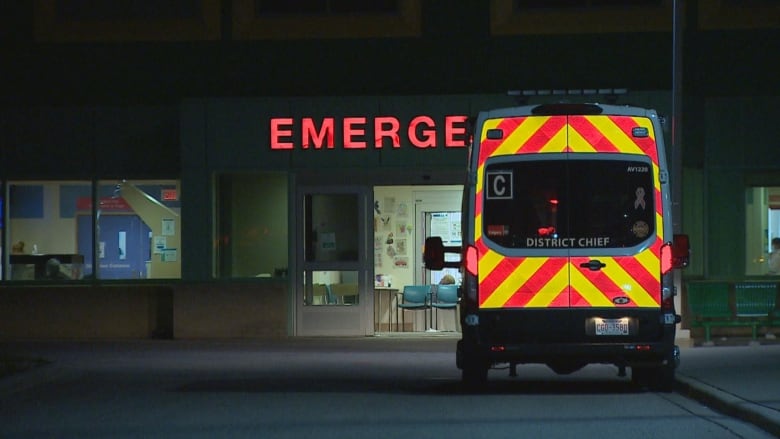 The emergency department at the hospital in Mount Forest, Ont., will be closed overnight on Saturday and Sunday because of “significant gaps in nursing coverage,” North Wellington Health Care says.

As well, a COVID-19 outbreak at Louise Marshall Hospital is putting additional strain on the system, says hospital president and CEO Angela Stanley.

“Our staffing all through the summer at our sites have has been precarious,” Stanley told CBC News.

Stanley said the decision was not made lightly, but after realizing there were significant gaps in staffing, the hospital realized it would need to reduce hours.

Nearby emergency departments are in Palmerston, a 20 minute drive away, Durham, which is 23 minutes away, or Listowel, a 32-minute drive from Mount Forest.

Mount Forest is the latest of a series of emergency department closures or reductions across Ontario. It comes after Ontario Health released new numbers that showed record-high wait times and patient volumes in the province’s emergency departments in May.

The Clinton Public Hospital’s emergency department closed temporarily closed throughout the Canada Day long weekend due to the nursing and physician shortages. This week, it’s had limited hours. It was open Tuesday from 8 a.m. to 2 p.m.

As well, hospitals in Wingham, Listowel and Chesley reduced their hours this past weekend.

“All efforts to find staffing for the emergency department have been undertaken without success,” the South Bruce Grey Health Centre posted on its website about the Chesley hospital.

Mary Cardinal, vice-president, people and chief quality executive at Huron Perth Healthcare Alliance, said in a statement on the website that she has heard concerns about the reduced services.

“These are not isolated incidents and hospitals across the province are experiencing the same challenges,” Cardinal said.

Jimmy Trieu, president and CEO of the Alexandra Marie and General Hospital in Goderich and the South Huron Hospital Association, said one issue is that over the last four years, many health-care workers have retired and one in five hospital staff in the province are over age 50. Those who have left the profession have cited the pandemic and burnout as top reasons.

“It’s going to be a challenging summer due to staffing pressures,” Trieu said in the news release.

Stanley agreed it’s not an isolated situation and staffing was an issue even before the COVID-19 pandemic.

“It’s been around for a number of years. COVID has just exacerbated the issues that we’re facing,” she said.

Stanley noted she’s heard people comment the hospitals should hire back health-care staff who opted not to get the COVID-19 vaccine, but says that’s not the problem.

“We have had only one nurse who chose to leave as a result of the mandatory vaccine. So it really is a non-issue,” Stanley said.

“I think it’s deflecting from the issues that we are facing. We’re wasting time talking about it when in fact we should be problem-solving and talking about what we know is causing these vacancies and the turnover and the exiting of staff from health care.”

Stanley asked the community for its continued support and their patience in the coming weeks.

“We are experiencing more and more concerns and behaviours from patients that we’re seeing that are adding to the stress of our clinicians and trying to care for them,” she added.

“The biggest thing that I can ask for, especially over this weekend right now, is patience and ongoing support.”