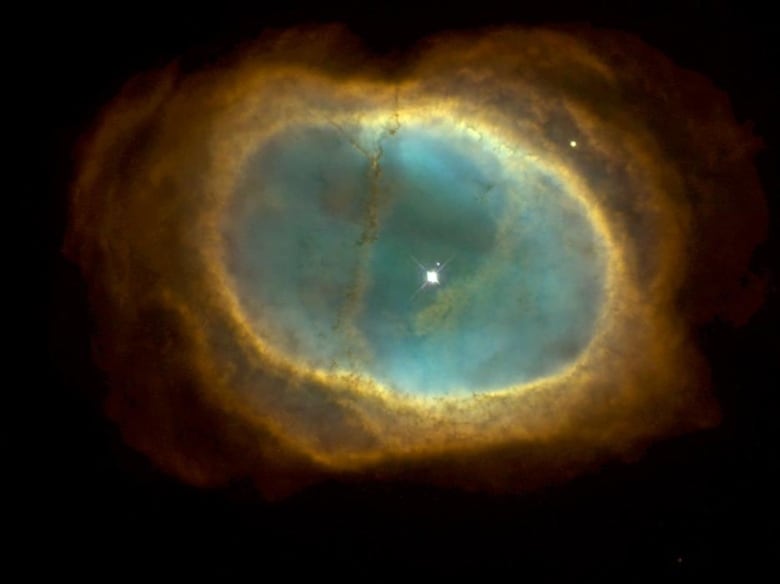 Roughly 13.8 billion years ago, the groundwork to everything we are, everything we’ve come to understand, was born.

Most people know that event as the Big Bang, but the creation of what we see today took time. Lots of it. Over billions of years it transformed from a place of high density and temperature, then expansion and then cooling. Eventually the simplest of elements formed, like hydrogen and helium, still the most abundant elements in our universe.

The first stars ignited, piercing through the swampy darkness. Then they clumped together to form galaxies, islands of stars in this dark void, even superclusters of hundreds to thousands of galaxies all linked together. Supernovas — violent explosions of massive stars — blew up within these starry islands, creating more stars and eventually planets. Like Earth, where life sprung up in abundance.

On Tuesday, the most powerful telescope ever built will help humanity trace its roots back to the beginning of time by peering through gas and dust, shedding light on what has thus far been unseeable.

And maybe, even reveal an atmosphere around an exoplanet.

The James Webb Space Telescope (JWST), a joint mission between NASA, the Canadian Space Agency (CSA) and the European Space Agency (ESA), will release several images — five at the very least — from peering through the darkness and the dust back to when the universe was in its infancy.

On Friday, the agencies announced their targets:

“You’re going to see images that are absolutely stunning,” said René Doyon, a professor at Université de Montréal and principal investigator of NIRISS, one of the four scientific instruments on the James Webb Space Telescope.

The JWST is a $10-billion powerhouse. Sitting in an orbit beyond the moon, the telescope is larger, and thus much more powerful than the Hubble Space Telescope which orbits Earth. It also has different capabilities than Hubble, and as a result, is able to peer further back into time to when the universe was in its infancy.

Canada has played a major role in Webb’s capabilities. First, there is the Canadian-built Fine Guidance Sensor (FGS), which is crucial to keeping the telescope on target.

There’s also the Near-Infrared Imager and Slitless Spectrograph (NIRISS), which will help astronomers study the atmospheres of exoplanets and observe distant galaxies.

Because of Canada’s contribution, astronomers here will get a lot of time to use the telescope.

“Canadians should be proud to [be part] of this project,” said Doyon, who’s been working on Webb for the past 20 years. “Every single image, every single [bit] of data that will come out of Webb will have been guided by the eye, the Canadian eye from FGS. So … we should definitely be proud.”

Peering deeper into the past

The farther away an object is, the longer it takes for its light to reach us. That means everything we see is as it was, not as it is.

Telescopes allow us to see further back in time by collecting faint light. The bigger the telescope, the more light it can collect and the further back it can see.

While Hubble has been able to see distant galaxies, it doesn’t have the resolution Webb does, so that means the images will be far sharper, revealing much more detail.

As well, Webb sees in the near-infrared, which means it can look through the dust and gas that might otherwise obscure objects. Hubble mainly sees the universe in optical light, like the human eye, though it can also see in ultraviolet and near-infrared wavelengths. Webb, however, is optimized to see in the infrared.

All this is to say, Webb will peer deeper into our past than ever before and provide astronomers with incredible detail.

“There’s a difference between detection and actually studying something in depth. Hubble had seen specks of objects that we think had formed just a few 100 million years after the birth of the universe,” said Lamiya Mowla, an astronomer at the University of Toronto’s Dunlap Institute for Astronomy and Astrophysics.

“However, those need to be studied even deeper with James Webb. With James Webb we can actually see objects as they’re forming, just after they are getting warm; discs are forming; bulges of the galaxies are forming. That’s the type of era that we will be able to see with the James Webb Space Telescope.”

Mowla, who specializes in galaxy evolution and formation, is also part of the CAnadian NIRISS Unbiased Cluster Survey (CANUCS), which will study some of the earliest galaxies in the universe.

She’s eagerly anticipating the release of the first science images and will be watching from St. Mary’s University in Halifax with fellow CANUCS members, including Chris Willott, an astronomer with National Research Council Canada’s Herzberg Astronomy and Astrophysics Research Centre who is leading the research. The instrument will use NIRISS to study galaxies at different periods in the universe’s history.

I nearly broke my jaw the first time I saw this data.– René Doyon, professor at Université de Montréal

“It’s super exciting to finally see the data getting released,” said Willott. “I’ve been looking at these images for months now. And they are just so spectacular, and it’s really exciting that the whole world is going to get to see them on Tuesday.”

He’s anxious to get more data to study the evolution of galaxies, which come in all sorts of different shapes and sizes.

“I want to see how far back we can actually go towards the beginning of the universe. We know that Webb is going to smash the records that we could get from Hubble in terms of how far back and how early in the universe we can look. But we don’t really know how far back we’ll get with Webb. And that’s something I think that will take time.”

Webb will not only be able to see some of the earliest galaxies, but it also can detect atmospheres around distant planets orbiting other stars. Ultimately, astronomers hope Webb will be able to detect any potential signatures of life from these exoplanets.

“I can say that [on] July 12, we’re turning a new page on a new chapter for studying exoplanet atmospheres,” Doyon said. “The quality of the data is just completely amazing. I nearly broke my jaw the first time I saw this data.”

While the general public may be excited to see new and more detailed images of our universe, for astronomers it’s all about getting their hands on the data for analysis.

For example, Doyon said, there’s the famous exoplanetary system known as TRAPPIST-1, which has seven planets, three of which are in the habitable zone, a region around a star where water is able to exist on a planet’s surface.

“The only way to find out whether they have water on their surface is to measure the atmosphere,” he said. “And Webb has the capability to do this and particularly the NIRISS instrument.”

But that’s just the beginning of the exoplanet research. Astronomers hope to eventually find signatures of life.

“The next question is: do they have water on [their surfaces], then the next step will be biosignatures, gas that is only produced by biological activity. That is a long shot. I mean, we know that it will be very hard to detect that with Webb, it will take probably a whole lifetime of JWST to do this, but who knows? That’s the nice thing about this: we’re going to be caught by surprise.”

Mowla is also waiting to be surprised researching galactic evolution.

“Really, I am waiting to see something that cannot be explained by the current theory. Because that’s what always happens. Whenever you have new data, and you look at the universe in a different realm. You always find something that will go against your theories and it will force you to rethink a lot of things,” she said.