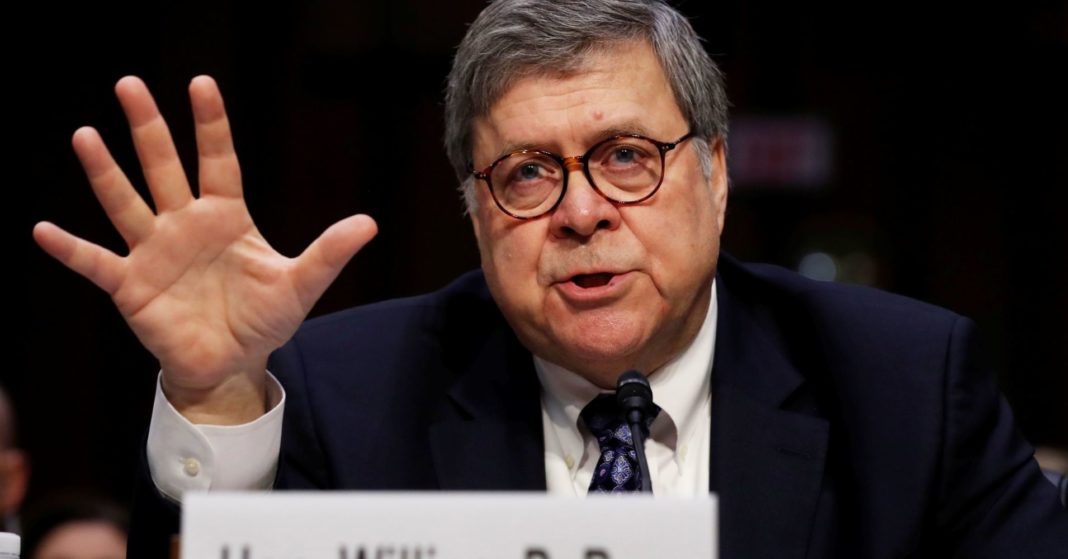 William Barr, President Donald Trump’s nominee for attorney general, faced off with the Senate Judiciary Committee on Tuesday in his confirmation hearing.

Barr was grilled for more than seven hours, fielding questions from the 22-member committee on a range of issues including the record-breaking partial government shutdown, the federal government’s stance toward marijuana and to what extent Barr would be influenced by the president.

But preoccupying the minds of most of the panel’s Democrats was special counsel Robert Mueller’s ongoing investigation into Russia’s 2016 election interference and possible collusion with the Trump campaign.

Barr answered dozens of questions probing his thoughts on that investigation, many of which centered around whether he should recuse himself from any involvement with it. He was also asked about how he would reconcile a potential final report from Mueller’s office with his commitment to bring transparency to the probe.

It was Barr’s second time auditioning for the role of top law enforcement official in the Department of Justice. Barr had previously served as attorney general during President George H.W. Bush’s administration in the early 1990s, and was unanimously confirmed by the Senate.

But Barr, now 68, stepped into a much different political environment this time around. And while he is still broadly expected to prevail in the Republican-controlled Senate, at least one Democratic senator— likely 2020 presidential challenger Elizabeth Warren of Massachusetts — has already vowed to vote against him.

@SenWarren: William Barr has already expressed his bias against the Mueller investigation – that alone should disqualify him from serving as Attorney General. He also wants to gut the ACA, thinks Roe v Wade should be overturned, & has a troubling record on criminal justice. I’ll vote no.

Here are the big takeaways from Barr’s testimony:

Kicking off Barr’s cross-examination was committee Chairman Lindsey Graham, R-S.C., who asked Barr point-blank whether Mueller would be involved in a “witch hunt against anybody.”

Barr responded in kind: “I don’t believe Mr. Mueller would be involved in a witch hunt.”

Trump has long called the Russia probe a “witch hunt” since Mueller’s appointment in May 2017. The phrase has become shorthand for Trump’s claim that the investigation is politically motivated and based on no credible evidence of wrongdoing.

Trump’s view of the probe as malicious was contrasted by Barr’s prepared remarks before the committee, where he described Mueller as a longtime friend and said he had confidence that Mueller was handling the investigation “properly.”

Barr’s predecessor, Jeff Sessions, recused himself in early 2017 from any federal investigations into Russian election meddling, following reports of his previously undisclosed contacts with Russia’s then-ambassador to the U.S., Sergey Kislyak.

On Tuesday, some senators asked if Barr would do the same, in light of a 19-page memo he sent the DOJ questioning whether Mueller’s reported inquiry into possible obstruction of justice by Trump was legally sound.

Barr said in his testimony that he would seek the advice of ethics officials on whether he should recuse himself — but that he doesn’t have to follow their recommendations.

Sen. Kamala Harris, D-Calif., who is widely believed to be considering a 2020 presidential bid, asked Barr: “Under what scenario would you not follow their recommendation?”

Barr replied: “If I disagreed with it.”

Pressed by Harris, Barr added that “it’s a judgment call. The attorney general is the person who makes the judgment.”

His memo, sent in June, raised fears that Barr may have been selected by Trump because of a bias against the investigation.

Barr said in his opening statement that the memo was narrow in scope, applying to a single statute that he inferred was being applied based on news reports he had read. He further told ranking Democrat Dianne Feinstein that the memo was speculative.

“I was writing in the dark. We are all in the dark. Every lawyer, every talking head, everyone who thinks about or talks about it doesn’t have the facts,” Barr said.

Trump’s sometimes warm approach to Russia has garnered criticism from Republicans and Democrats alike. And the extent of the Kremlin’s interference attempts, revealed in part by Mueller’s probe, have cemented Russian President Vladimir Putin as a foe of the U.S. to many Americans.

Asked whether Putin was a friend or foe by GOP Sen. Ben Sasse of Nebraska, Barr said “I think the Russians are a potent rival of our country,” but stressed that “at the same time, I think the primary rival of the United States is China.”

“Russia is half the size it was when we were facing them at the peak of the Cold War. Their economy’s long-term prognosis is nowhere near China’s,” he said. “I’m concerned that the fixation on Russia not obscure the danger from China.”

Khashoggi, a critic of the Saudi royal family, was killed in the Saudi Consulate in Istanbul in October. The Saudi foreign minister eventually admitted that the killing was an “unfortunate accident,” but the kingdom has maintained that the crown prince himself was not involved.

Klobuchar, explaining that a free press was “a particular concern” to her, asked Barr: “If you’re confirmed, will the Justice Department jail reporters for doing their jobs?”

After a pause, Barr said that “I know there are guidelines in place. And I can conceive of situations where, as a last resort and where a news organization has run through a red flag or something like that, knows that they’re putting out stuff that will hurt the country — there could be a situation where someone could be held in contempt.”