The year’s ‘most dependable’ meteor shower peaks this week. Here’s how and when to watch 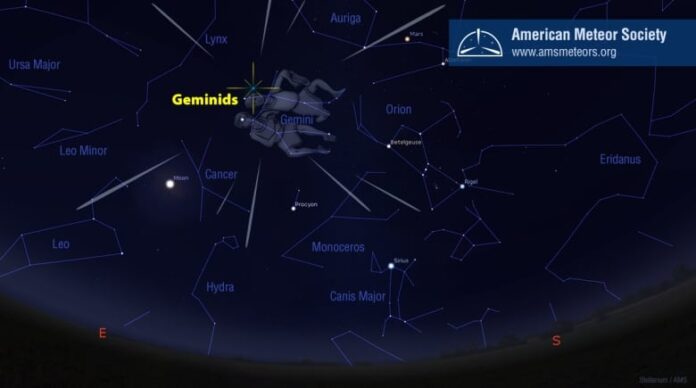 The nights are longer as the cold weather settles in, but that’s a good thing if you love to stargaze. And this week is a perfect time to turn your eyes to the skies.

On Tuesday night into early Wednesday morning, the most active meteor shower of the year peaks.

The Geminid meteor shower is an annual shower that the American Meteor Society has deemed to be the “most dependable” shower of the year. And that’s with good reason: Every year, during the peak night, under ideal conditions, there are roughly 150 meteors an hour.

Not only that, but the shower tends to bring bright fireballs.

Try this interactive map showing how Earth passes through the meteor shower:

And, as with almost every major meteor shower, the Geminids gets its name from the constellation from which the meteors appear to be originating from, called the radiant.

In this case, the constellation is Gemini.

How and when to look

Unfortunately, this year’s shower has a bright interloper: the moon.

The moon, which will rise around 10 p.m. for most places across the country, will be roughly 70 per cent illuminated, meaning that it will wash out faint meteors, particularly when it rises higher in the sky.

But that doesn’t mean the shower will be a disappointment.

“The best time is probably right after sunset until moonrise on the night of Dec. 13,” said Peter Brown, Canada research chair in meteor astronomy and a professor at Western University in London, Ont., in an email.

“However, the shower is almost as intense the night before (Dec. 12) and brighter meteors tend to happen after the peak, so Dec. 14 in the evening would be good as well.”

If you’re planning on trying to catch some “shooting stars,” it’s best to get to as dark a location as possible, away from any streetlights. Brown also recommends trying to put your back towards the moon or have something block out its glare.

A couple of pointers: Try to sit in a comfortable chair where your head is somewhat supported, otherwise your neck will get tired and may prompt you to give up. Also, be patient: It could be a while before you see one. And stay away from your phone; it’s best to let your eyes adjust to the darkness in order to see even the fainter meteors.

As well, you just need to look up. No need for binoculars and no need to even look specifically in the direction of the radiant. Meteors will come from all directions.

Though there’s the moon to contend with, you likely won’t be disappointed, as the Geminids tend to produce super bright meteors, called fireballs or bolides. And not just on the peak night.

“The shower tends to produce more fireballs after the main peak, so Dec. 14 is a particularly good night to watch for brighter Geminids,” Brown said.

Also, Mars will be shining brightly near the radiant as a red “star” and Jupiter will be low in the southwest, so keep an eye out for that, as well.