The phenomenon of Biafra (3) 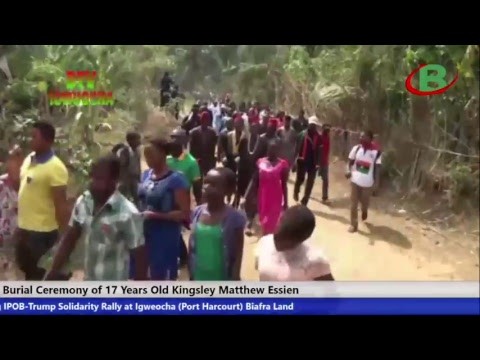 In the last two series we have described, albeit briefly, some of the critical events that led to the formation of Nigeria as a result of British imperialism mostly executed through violence. We have also seen that Lord Lugard brought together the north and south to form a single economic and administrative unit for maximum economic exploitation of the colonial amalgam he created and for administrative convenience as well. A point overlooked by historians and often denied by revanchist apologists of caliphate colonialism is that although the interests of the indigenous peoples were not of primary consideration to the British when they decided to amalgamate the northern and southern Nigeria given the inherent exploitative logic of colonialism, Lugard and his cohorts, for reasons stated earlier, also intended to use resources from the south to develop the north because they found the latter more amenable to colonial manipulation than the south and, consequently should be rewarded.

That said, we shall now analyse the political evolution of Nigeria since amalgamation, paying particular attention to the various ways by which British colonialists and a handful of Nigerians created a country with deformities that made it almost impossible for a truly Nigerian nation to emerge out of the rich mosaic of ethnic nationalities in the “Niger area”, thus validating till date the decades-old wry assertion of late Chief Obafemi Awolowo that “Nigeria is not a nation; it is a mere geographical expression. There are no ‘Nigerians’ in the same sense as there are English or Welsh or French.”

Even before the creation of Nigeria, as early as June 1913, the British colonial office had recognised a serious problem that Lugard himself did not envisage, namely, determination of the foundational structure for the new country being contemplated. Should it be a federal or a unitary state? For the British, Native Administration was the most efficient way of running the colonies, which entails a hierarchical style of governance in which traditional rulers empowered by the colonial administration had limited powers or political input that inform policies guiding public administration. As a result, the Indirect Rule system was introduced. It worked reasonably well in the north where the islamic emirate system founded by Usman Dan Fodio and his descendants had established institutions that were easily adaptable to it.

But in Yorubaland, indirect rule was partially successful. Lugard not only overestimated the powers of the Obas, he failed to reckon with the fact that in several parts of Yorubaland, an influential class of western-educated elite had emerged who were suspicious of British intentions for their communities. The introduction of indirect rule in Eastern Nigeria by 1928 was a total failure. In Igboland and large parts of the eastern region, social units were too small to carry the responsibilities expected of an emirate in the north. In addition, the Igbo system of village democracy was radioactive to the emergence of centralised traditional authorities able to command the unquestioned obedience of their people. In order to solve the “Igbo problem,” the British created warrant chiefs and invested them with powers that were strange to the people.

Expectedly, the strategy did not work: for example, riots broke out in Aba in 1929 and quickly spread to other areas in the east when some of the unpopular warrant chiefs introduced taxation, as directed by the British administration. This means that the colonial administrators, despite the myth of innate European intellectual superiority to indigenous African peoples, did not really understand the dominant weltanschauung of Igbo people and the character of society that flows from it.

The remote causes of the Biafran phenomenon can be traced, among other things, to what the late historian, Prof. Adiele Afigbo, described as the British mis-tutelage of the colonial amalgam created by Lugard, although the reality of different geographical locations, cultures, religion and ethnicity played an important role as well. The perception of what these differences portend for the emerging state by Nigerians, particularly members of the ruling elite, from 1914 to October 1, 1960 and beyond, is a critical factor in shaping the responses of different parts of the country to the challenges of nation-building at any point in time, including the demand for secession by any part of the amalgam. Now, immediately after the amalgamation the colonial administrators and a handful of Nigerians worked to firm up the unsteady feet of the new-country-in-the-making, the disparity between the north and the south with regard to the acceptance of western education began to rear its ugly right from the start. As we pointed out earlier, southern Nigerians were exposed to as much western education as the colonial system could offer, whereas in northern Nigeria, British officials were very reluctant to disrupt the Islamic system entrenched there already, such that koranic education was overemphasised to the detriment of the much more desirable western education. Repercussions of the big gap in education between the south and the north has been a leitmotif that manifested not only in the differential attitudes to the quest for self-rule but also in the post-independent determination of power relations in the country.

Having learnt some lessons from the failure of Lugard to lay a solid foundation for Nigerian unity based on the indirect rule mechanism, Sir Hugh Clifford, Lugard’s successor, introduced some constitutional reforms in 1922. The Clifford constitution expanded the legislative council in Lagos, whose role in the colonial set up was largely advisory. A further step towards unification was taken when the colonial office in London accepted Clifford’s recommendation to create a central secretariat in Lagos. The period between the terminations of the two world wars witnessed the growth of nationalist agitations in Nigeria spearhe4aded by western educated southerners with a sprinkling of northerners.

After the Second World War, between 1945 and 1946, Sir Arthur Richards (also known as Lord Milverton), embarked on constitutional reforms, since the unitarist one he inherited from his predecessor was inadequate. Pursuant to that, the northern region made it explicitly clear that it never  really wanted amalgamation with the south. Sir Ahmadu Bello, Tafawa Balewa and other prominent northerners insisted that unless the principle of separate regional development is enshrined in the new constitution and the north gets fifty percent of the seats in the central legislature, the region would secede. The north got what it wanted. By 1947, Nigeria became a federal state comprising the eastern, northern and western regions.

It must be pointed out that the north’s position was more realistic than the wish for greater integration championed by Dr. Nnamdi Azikiwe, given the multiply plural nature of Nigeria which bred mutual ethnic suspicion and rivalries, thereby making national integration a herculean task. Although the Richards constitution was an improvement over the unitarist arrangement of the previous constitutions in terms of devolution of powers to the federating units, yet legislation was to be passed for each region by a central legislative council in Lagos based on requests forwarded to it.

Sir Richards was succeeded by Sir John Macpherson, who introduced a new constitution in 1951 that virtually reversed the gains towards greater devolution of powers achieved by his immediate predecessor. The politically sagacious and overbearing notherner,    Sir Ahmadu Bello, recognised that the British were jittery anytime the north threatened secession: he used the threat effectively to secure concessions for his region. As Afigbo perceptively remarked in his paper “Background to Nigerian Federalism: Federal Features in a Colonial State,” the northern elite asked for, and received, protection from their British mentors against the seemingly excessive zeal of southern nationalists who were clamouring for One Nigeria, One nation, One flag. Northern leaders knew that the north was far behind the south in western education and in the acquisition of skills required for modern government. Ironically, they were comfortable with British domination and, propelled by obsessive fear of domination by the south, Sir Ahmadu Bello and his lieutenants worked hard to ensure that Nigeria developed the loosest possible form of federation.  During the various regional conferences summoned by Macpherson in 1949, delegates from the north demanded fifty percent representation at the central government. A year later, at a follow-up general conference in Ibadan, the emirs of Zaria and Katsina threatened that the north would pull out of Nigeria if the region was not given fifty-percent of the seats at the federal legislature.

The Lyttleton constitution adopted in 1953 marked a watershed in Nigeria’s evolution towards a federal system. Festus C. Eze described the process as “federation by disaggregation.” Under the new constitution, the three regions began to enjoy more autonomy by exercising executive powers. For the first time, the principle of derivation was adopted in revenue allocation. The constitutional conferences summoned by the British colonial administrators might create the erroneous impression that the colonialists really wanted to help Nigerians build a strong, virile, prosperous and egalitarian modern nation in line with Lord Lugard’s theory which he enunciated in his book, The Dual Mandate. But that is not the case: Britain had no long-term programme for Nigeria because matters were dealt with in an ad hoc piecemeal fashion, and difficult issues were swept under the carpet in the hope that they would sort themselves out or be resolved later.