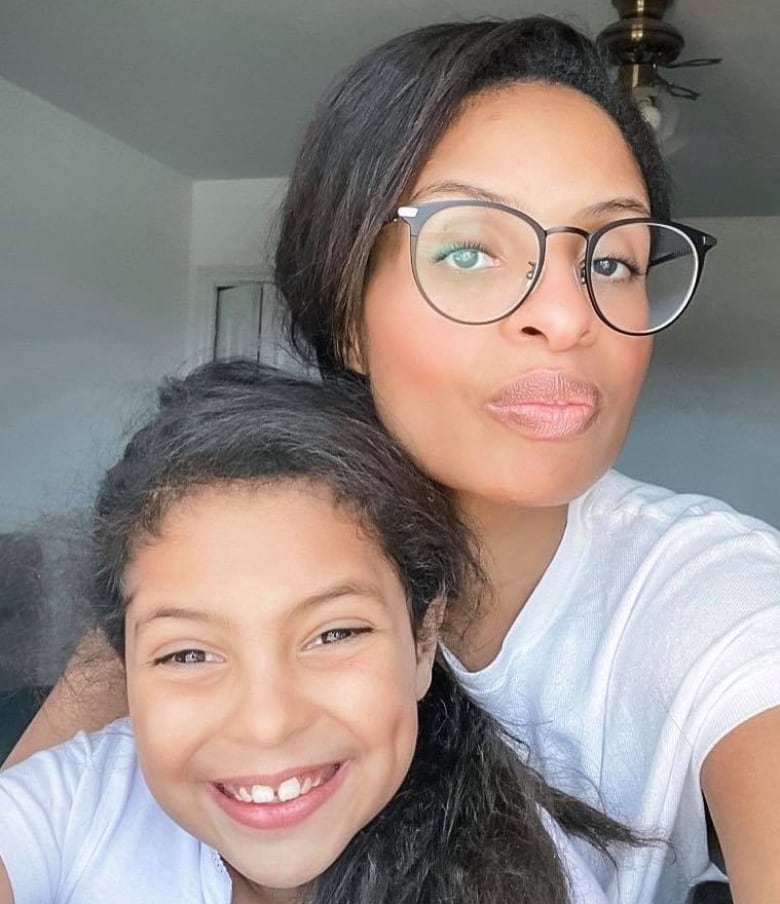 It was sometime in February when Deb O’Hanley watched her daughter approach her, enthusiastic and excited, pointing at the spot on her arm.

The scratch itself and how it came to be on her daughter Sixtine’s arm would never be as perplexing as her daughter’s observation once the wound began to heal — causing the small patch of skin to appear lighter in colour.

Peach, O’Hanley said, is the word that has seemed to mysteriously emerge in both her biracial daughters’ vocabulary from a young age, to describe the people they observed in the world with lighter skin than their own.

“I don’t know where it comes from,” O’Hanley said.

‘They ask a lot of questions about their colour’

It wasn’t the observation that worried her, she said, but the excitement she witnessed her daughter express over the sudden lightening of her skin.

“It makes me want to cry, to be honest,” O’Hanley said. “I do notice that their skin colour, they ask a lot of questions about their colour because they don’t understand why they were born white and why they’re brown now, which is normal for mixed kids.

“I think they just want to be like other kids, they want to be the same as their friends in colour.”

O’Hanley, who is originally from France, has counted herself among the Black community on P.E.I. for nearly 10 years. She met her husband, a white man from Summerside in 2009, while on a trip to Iceland.

There’s this feeling of having to, for me anyway, of having to show and to prove my worth to other people and I don’t want them to feel that they have to do that.— Deb O’Hanley

She said in raising her two daughters, Sixtine who is eight and Victoire, 7, she’s happy that they have her as a Black woman, with a typically darker complexion to see, identify and relate to while growing up on P.E.I.

“There’s not a lot of Black representation on the Island,” she said. “I worry about what is it going to be like when they’re older, because they’re very cute and I’m sure they’ll be cute later but there’s a shift, I think.

“Maybe when they want to get their first job or something like that. There’s this feeling of having to, for me anyway, of having to show and to prove my worth to other people and I don’t want them to feel that they have to do that to be taken seriously.”

O’Hanley said “the shift” happened once she entered her teen years.

‘It’s because other people pointed it out’

“Because you’re more of an adult-looking individual. So you’re not just a cute little exotic brown child, you’re more of a, you know, Black girl. So you don’t bring that sweetness … to the plate,” she said.

“Just like when my dad told me that he realized he was Black when he moved to France. It’s because other people pointed it out, that he felt that he was Black and it wasn’t OK, and that’s how I felt as well.”

She felt that she shouldn’t go to school with her hair braided — that kind of stuff kills me.— Brooke Laybolt

Islander Brooke Laybolt has two daughters, 13-year-old Adrianna and four-year-old Jazlyn. But they will never share the same experience with race.

Adrianna is biracial while her younger sister Jazlyn is white.

In the aftermath of George Floyd’s murder and the protests which have followed since, Laybolt can’t help but wonder how the individual life experiences of her daughters could and will differ.

“I have a 13-year-old mixed child, she’s Canadian-Liberian,” Laybolt said. “It breaks my heart that my oldest doesn’t get to feel like she’ll have the same opportunities in life because of her skin colour.

“I shouldn’t have to teach both children different things like that. They’re both equal, my oldest is just as beautiful and just as smart.”

Seemingly small things, like having the girls’ hair done, manage to emphasize issues of race.

“It hurts me as a mom. My other child, I can braid her hair and people will say, ‘Oh my God, that’s so cute,’ but my oldest child fears going to school and being made fun of,” she said.

“There was a woman who put 11 hours into [Adrianna’s] hair and it was beautiful and she came home crying and we had to remove it because she felt that she shouldn’t go to school with her hair braided — that kind of stuff kills me. She should be able to wear her hair however she likes.”

The events of recent weeks have brought on mixed feelings for both mothers, who each brought their children to last Friday’s historic demonstration, which saw thousands of Islanders participate in a call for justice.

“I cried so much and with my mask on,” O’Hanley said. “Everything that I had been feeling and I couldn’t put into words, they had the words and I just felt like a feeling of community.

“It was heartbreaking but at the same time it made my heart warm.”

‘A baby’s not born racist’

Even so, O’Hanley worries whether people will remain motivated to keep up the momentum, so that the demonstrations and calls to action don’t become isolated slivers in time, and her daughters might one day see a world rooted in equity and equality.

“I can feel … I don’t know if it’s the pandemic and people are kind of like thinking about their life in general, like who they are as a person, what’s important, what’s essential … I’m wondering if that’s why it’s bigger or maybe it’s just years piling up,” she said.

“I think education is … the best way for changing the world, changing things that aren’t working,” she said. “A baby’s not born racist.”

Both mothers expressed the cruel reality of having to explain to their children the violent context surrounding the demonstration and others like it happening across North America — as well as having to answer their children’s questions and witness their confusion.

“My four-year-old wanted to go up to them and just tell them to be happy and that everybody is equal. It was heartwarming but painful,” Laybolt said.

As a mother, Laybolt said she’ll never be able to shake the worry she feels for both her daughters and their futures.

“It’s 2020 and there’s things that are happening that you just wouldn’t think would happen,” she said.