The girl from the orphanage: A Montreal nurse’s quest to discover her past 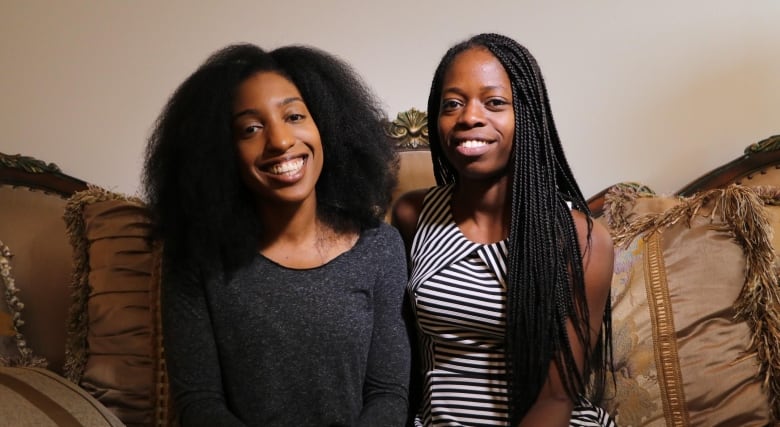 Hannah Palmer only has vague memories of the small Haitian orphanage where she spent the first five years of her life.

She recalls a large room full of beds where she slept every night. She recalls she didn’t like taking naps or following rules.

And she recalls a girl about her age who acted like a big sister to her. She’s the only person Palmer remembers from the orphanage.

Palmer, now a 24-year-old nurse living in Montreal, is searching for that girl in the hopes of recovering more memories from her childhood.

“I do remember that she took my shoes and I was upset about that,” Palmer said in a recent interview.

“That’s the last thing I remember. I was really petty about that.”

Palmer’s birth name is Vaenka-Andrée Barret. She was adopted from the Crèche le Colibri orphanage in Port-au-Prince 19 years ago.

When she arrived at her new home in Chelsea, Que., a small town north of Gatineau, her adopted family gave her a choice of five names, including Sarah and Savanna.

The five-year-old settled on Hannah. She then went outside to play in her new home, a little confused by what was going on.

Palmer grew up with her adoptive parents and three adoptive siblings.

“I was black and my family was white. The whole neighbourhood was white,” she said. “So, of course, I always had the thought of having a family that looked like me,” Palmer said.

When she was 19, Palmer moved to Montreal to study at McGill University. She also turned to the Quebec government to get information about her biological family.

She found out her birth name and that she was born in Saint-Jean-du-Sud, Haiti, a fishing village on the Baie des Cayes. The documents also indicated her mother had another child, but there were no names or other details included.

Palmer decided that finding out more wasn’t worth the effort, and gave up the search for her family.

“I always thought of it as the minute I was adopted from Haiti, ‘Vaenka’ kind of passed away. She was just part of this Haitian life that was no longer me,” said Palmer.

“It was almost as if I was born in 2000 and everything else before that was just non-existent.”

Several years went by. Palmer had moved on, and began studying to become a nurse at a college in Gatineau. Then a new friend walked into her life and changed everything.

“This girl comes in with her poofy hair and sits right in front of me in biology class. I was just like, ‘Wow, she’s going to block my view and I can’t even see the teacher,'” said Palmer.

The student in question was Éva Tchimanga, and the two would sit next to each other during their first year of nursing school. They became fast friends.

When Palmer related that she was adopted and had never met her birth family, Tchimanga was intrigued.

“I looked her in the eye and I was like ‘Hannah, this might sound crazy, but one day I’m going to be the one who finds your family,'” said Tchimanga.

And that’s exactly what she did.

‘We’re looking for her’

Tchimanga took to Facebook, armed with nothing but her friend’s last name at birth and the social network’s location filter.

She looked at the first profile she found, a woman by the name of Rosebertine Barret. She flipped through Barret’s photos and noticed a resemblance with Palmer.

Tchimanga sent a message asking if she knew Palmer. It took her an hour to reply.

“I’m her cousin. We’re thinking about her, we’re looking for her,” the message said.

When Tchimanga first told her friend about her findings, Palmer wasn’t sure how she should feel.

“It was very surreal,” said Palmer. “I still had to understand how I was feeling about it and if I wanted to reconnect because I didn’t think [Tchimanga] would actually succeed.”

But the two friends opted to continue corresponding with Rosebertine. And as they did, more details about Palmer’s family emerged.

Rose couldn’t afford to raise three children on her own, but didn’t know what to do. One day, a visiting relative named André proposed a solution: he placed Palmer and Immaculé in an orphanage.

Immaculé is the girl Palmer remembers all these years later. “In my head she was always like an older sister,” said Palmer.

Rosebertine put Palmer in touch with Immaculé’s biological family back in Haiti. Immaculé’s birth parents, along with her 10 siblings, have been actively looking for her on social media.

They believe Immaculé was also adopted by a Quebec family and likely grew up in Quebec City. She would be around 25 today.

Palmer has joined the search and keeps in touch daily with Immaculé’s siblings. But she’s keeping her expectations in check.

She knows that, much like herself, Immaculé’s name may have been changed after adoption and she may not even be aware of her birth name, making it a challenge to find her.

Not that she’s giving up. “I probably should apologize about the pettiness over those shoes,” Palmer said.

Back to her roots

Tchimanga’s search has also allowed Palmer to get in touch with her biological half-sister, Darana.

The two immediately bonded. Through their Facebook conversations, Palmer learned she’s now an aunt, and has a nephew back in Haiti.

Palmer received another surprise when she discovered that André, the relative who brought her to the orphanage, had been living in Montreal for years.

She was hesitant, at first, about meeting him but eventually agreed to have lunch together. He took her to a restaurant where she tried Haitian food for the first time since she was five.

André was also able to help her understand why the family put her up for adoption. “He was super close with my mother and he saw me almost as a daughter, which was really sweet,” she said.

Palmer is saving up for a trip to Haiti next January, when she’ll meet the rest of her biological family. It will be her first trip back to the country where she was born.

“I have a family here, obviously, but it’s nice to know that I have this whole other family back in Haiti,” Palmer said.