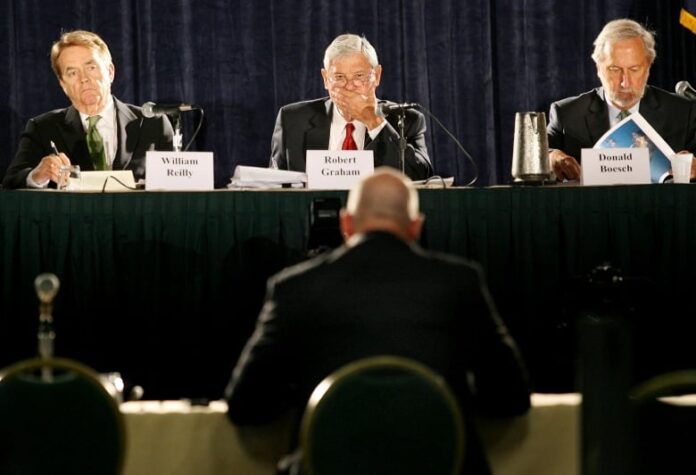 Marine scientist Donald Boesch says the controversy fuelled by recent oil spills off Canada’s East Coast has some “fairly interesting and striking comparisons” to his past work examining how the offshore industry is managed, as part of a U.S. inquiry into the Deepwater Horizon disaster.

“Some of the recommendations we had in our commission report are appropriate — make sure you’re putting sufficient space between the economic decisions to advance oil production, and so on, from those that have to manage safety and protect the environment,” he told CBC News.

Boesch, a professor at the University of Maryland, was one of seven people appointed to the National Commission on the BP Deepwater Horizon Oil Spill and Offshore Drilling by President Barack Obama in 2010.

A massive explosion on the rig in the Gulf of Mexico killed 11 people and set off the largest marine oil spill in American history.

Boesch says one of the most critical lessons the commission learned is that the U.S. agency overseeing offshore oil in the gulf had a conflict of interest built into its mandate.

The Minerals Management Service oversaw development as well as safety and environmental regulations in the offshore.

Boesch said development demands were found to take priority, and that was “pretty clearly one of the things that went wrong.”

“Finding some way to provide some space and protection [for] true, earnest attention to safety and environmental protection is critical,” he said.

Obama broke up the Minerals Management Service on the commission’s recommendation.

Boesch also points to the 1988 explosion on the Piper Alpha platform in the North Sea that killed 167 crew members and forced a similar reckoning in the U.K.

“In each case, and usually often following these major accidents, investigations led to the identification of that need for a clear separation of responsibility and the independence of the mission to ensure safety and to protect the environment,” he said.

Critics have accused the Canada-Newfoundland and Labrador Offshore Petroleum Board (C-NLOPB) of having a similar conflict. The province’s offshore regulator is in charge of both maximizing oil recovery and value, and overseeing safety and environmental issues.

In 2010, an inquiry following the Cougar helicopter crash that killed 17 people heading to the Hibernia platform recommended a standalone safety regulator. That didn’t happen, although there is now an autonomous safety division within the C-NLOPB.

And as spills accumulate in the Newfoundland offshore — there have been three in the past 10 months, releasing a total of 264,200 litres of oil into the North Atlantic — environmental groups and the provincial NDP have renewed their calls for an independent, standalone safety and environmental regulator.

“We have four installations offshore. As we grow, that might be something that we want to consider to have,” Siobhan Coady, the province’s minister of natural resources, recently told CBC News.

Boesch said he can’t speak specifically to the regulatory situation in Newfoundland and Labrador.

But, in general terms, he said, the province might also learn from the commission’s findings about how much a regulator can rely on industry.

“I think we’ve learned that there’s some dangers in overreliance on industry self-regulation, self-reporting, that has global relevance, not just in the Gulf of Mexico,” he said.

The largest spill in the history of the Newfoundland and Labrador offshore occurred last fall, when Husky Energy was trying to start up production on the SeaRose vessel in 8.4-metre waves during the tail end of one of the worst storms to pummel the province in years.

The C-NLOPB said Husky didn’t need its blessing to hit the switch, drawing renewed criticism of the regulator’s reliance on operators to make their own plans.

Last year, the Newfoundland and Labrador government announced an agreement to develop its first deepwater project with Norway-based Equinor, in waters nearly as deep as the Deepwater Horizon site.

Boesch says oil companies have made huge technological advances to take on and manage the added risk and uncertainties with deepwater drilling, and they deserve credit for that.

But he also cautions that with any deepwater project, “You’re going to have some surprises.”

A small risk, but a high cost

Environmental assessment documents filed to the federal government by a number of operators in the offshore including Equinor, the company behind the $6.8-billion deepwater Bay du Nord project, say it could take 18 to 36 days to bring the capping technology developed to stop the Deepwater Horizon blowout to Newfoundland waters.

Those documents emphasize that the chance of a major blowout is remote.

“We were blithely assured, ‘This blowout could never happen, so we’re not going to try to develop the standby technology that controls it.’ Well, it happened,” Boesch said of the Deepwater Horizon disaster.

“It might be a very small risk, but it’s a very high cost. You need to put it in that context.”

In those environmental assessment documents, Equinor said it would likely have a capping stack shipped in from Norway or Brazil, and that having a stack on standby in Eastern Canada would not cut down on the overall time need to install it.

But with Newfoundland and Labrador gunning to double oil production by 2030, Boesch said it might make sense to revisit that idea.

“If the industry expands … if there’s a lot of deepwater drilling, I would think the regulators would be remiss without having the requirements to have that containment capacity.”

Arrests made amid ongoing tensions as Mi’kmaw lobster fishery begins

‘That grin, that big heart’: Remembering Terry Fox, the Marathon of Hope and one day in Thunder Bay