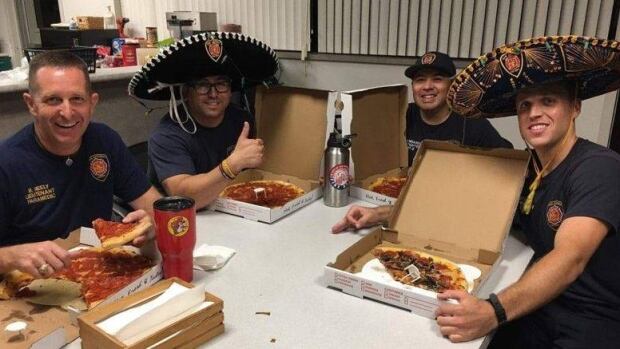 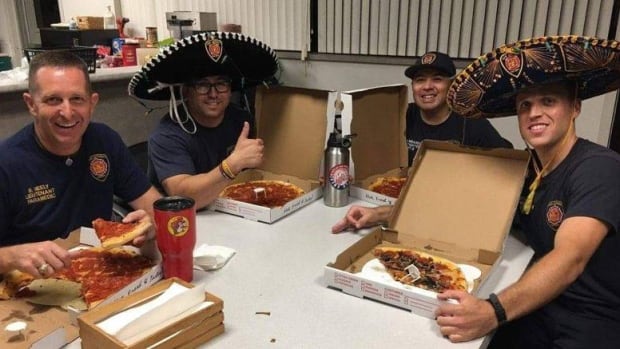 A mix-up in a pizza order from a northern Alberta firehall resulted in a tasty treat this week for some firefighters in Texas — and has inspired a Slave Lake restaurant to pay it forward with more pies.

The cheesy confusion started on Monday when the crew at the Lesser Slave Regional Fire Service decided to buy dinner for first responders who were attending a talk at the firehall.

Slave Lake fire department Chief Alex Pavcek said there were some early warning signs of a mix-up, but no alarm bells went off.

“They asked for a credit card number, which was kind of weird. We support that business all the time, so they don’t usually ask. But we didn’t think much of it,” Pavcek said in an interview with CBC Edmonton’s Radio Active.

“Then Alex had a number call him around 4 o’clock from San Antonio, Texas. He didn’t answer it. He didn’t know anybody from there.

“When we realized that we’d ordered pizzas in a different time zone, it was pretty unexpected. They asked where we were and it likely took them some time to figure out where Slave Lake was.”

The firefighters decided to authorize payment for the order anyway. Then they asked that the pizzas be delivered to first responders in the southern Texas city, so the food wouldn’t go to waste.

All that dough ended up being dinner for firefighters at Stations 16 and 25 on the south side of San Antonio.

The San Antonio Fire Department later posted a comment, saying next time any of the Alberta firefighters are in their city, pizza is on them.

Others benefit from Random Acts of Pizza

The mix-up inspired Moe Mouallem, the owner of Alimo’s in Slave Lake, to follow suit with a campaign called Random Acts of Pizza.

More than 16 surprise pizza deliveries were made Wednesday to schools, seniors’ homes, police stations, hospitals, homes and businesses in the town 250 kilometres northwest of Edmonton.

My day has just been going out and making people happy, and it all started with this one honest mistake.-Moe Mouallem

“As soon as we figured it out, we thought this is hilarious and just wanted to keep the momentum going,” Mouallem said Wednesday.

“We had $200 from a couple of anonymous people in town within the first few minutes, and it just kind of snowballed from there.”

The restaurant has been matching any pizza money sent in by the public. Nominations for worthy recipients continue to flood in.

“Literally all day, we’ve just been running pizzas to people. A lot of smiling faces, a lot of surprised people,” Mouallem said.

“My day has just been going out and making people happy, and it all started with this one honest mistake.”

As it turns out, the pizza delivery was the beginning of a beautiful friendship between Canadian firefighters and their American counterparts. Crews from the Slave Lake and San Antonio fire departments have connected over social media and now want to meet in person.

“Firefighters, we’re kind of a family,” Pavcek said. “It doesn’t matter if you’ve never met them. We’re all having a pretty good laugh about it now.

“We will probably have friends down there forever. Even if we never meet, we can always crack a pizza joke between the two departments.”