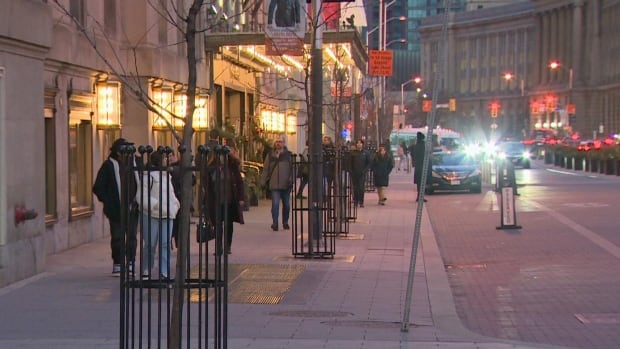 An alleged “swarming” attack in Toronto started when the eight teen girls charged in the slaying tried to take a liquor bottle from the victim and his friend, the friend says.

That witness, who CBC Toronto has agreed not to name, said she was smoking a cigarette with the man outside a downtown shelter early Sunday when the group of teens approached them and attempted to take her alcohol.

The 59-year-old victim, who police have not publicly identified, told the girls to leave the two of them alone, the woman said.

“He protected me,” she added.

That’s when the group of girls started to punch him repeatedly, she recalled. Frightened by the violence, she walked away while one of the girls followed her. She said she could see lots of blood.

She said she went into the shelter and brought him water afterwards. “I didn’t know he would die,” she said.

Local news channel CP24 cited Toronto police Det.-Sgt. Terry Browne as saying that a dispute over a liquor bottle was somehow involved in the initial phase of the deadly encounter.

The attack happened around 12:15 a.m. ET near the corner of York Street and University Avenue, just steps from Union Station.

At a news conference Tuesday, Browne said the victim was beaten and stabbed by the group, which included three 13- year-olds, three 14-year-olds and two 16-year-olds. All eight have been charged with second-degree murder. Their identities are protected by the Youth Criminal Justice Act.

According to Browne, it appears the teens connected on social media, but it’s not yet clear how or why they ended up downtown late Saturday and into Sunday morning. They all live in different parts of the city, he said.

Investigators have no evidence that the victim was known to them, Browne added. All of the teens appeared in court on the weekend, with further court appearances scheduled for Dec. 29.

Browne said police wouldn’t describe the girls as a gang at this point, but investigators are calling the incident a “swarming,” which he said normally involves selecting a target to victimize.

As of Tuesday evening, police were still trying to notify all of the man’s next of kin.

Browne said the man had only recently entered into the city’s shelter system and that he had supportive family in the area.

Toronto Mayor John Tory said in a statement that he is “deeply disturbed” by the details of the case.

“Everyone in our city deserves to be treated with dignity and respect. I am so saddened to know that a man has lost his life in this way,” he said.

“I am extremely troubled by the young age of those accused and by the number of people allegedly involved in this murder. My thoughts are with this man’s friends and all those who knew him as they mourn his loss,” he added.

Police are appealing for information from anyone who was in the area of the attack between about 10:30 p.m. and 12:30 a.m.