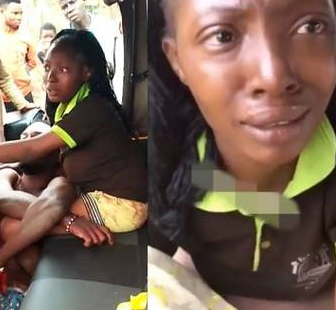 An Ebute Meta Chief Magistrate court has ordered 24-year-old teacher, Olamide Akinbobola, who stabbed her husband, 28-year-old Dare Akinbobola, to death in Ikorodu area of Lagos State on May 30th, be remanded in Kirikiri Prison pending receiving an advice from the State Directorate of Public Prosecutions (DPP).

At the hearing of the case today, the prosecutor, Sgt. Kehinde Omisakin told the Chief Magistrate, Mrs. O.A. Komolafe, that Olamide committed the offence on May 30th at No. 1, Olupebi Abijo St., Gbaga, off Ijede Road, Ikorodu.

Omisakin had told the court that the accused stabbed her husband, Dare Akinbobola, 28, on his neck to death with a kitchen knife. The prosecutor said the offence contravened Section 233 of the Criminal Law of Lagos State, 2015 (Revised). If found guilty, the offence attracts death penalty.

Olamide however told the court that she only stabbed her husband in self defence as he was fond of maltreating her. She recounted how the deceased bolted the door, pinned her down and was punching her.