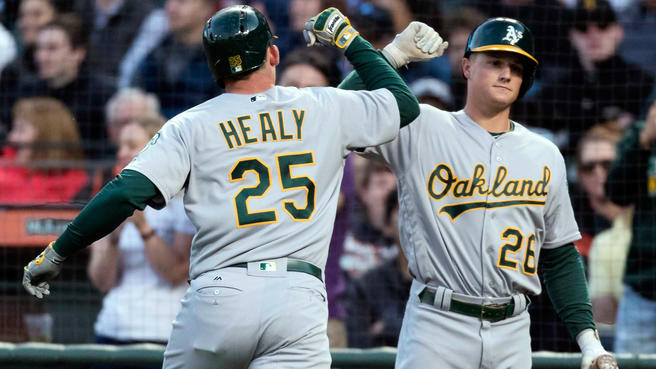 In an era where depth is key but quality is also essential, it’s hard to construct a competitive rotation for a 162 game season. Yet if the A’s can play so much as .500 ball in 2018, if this season is any indication Oakland can find itself in contention for at least the chance to go somewhere and try to win a one-game wild card playoff.

Looking ahead, the A’s certainly have an abundance of starting pitchers with the potential to be good, if not great. They also have little certainty that any of them will be great. Let’s take a look at the current depth chart and what – from my point of view, anyway – it looks like we can expect, what we can hope for, and what we can count on.

I still see Sean Manaea as a legitimate “front of the rotation” candidate going forward, but that depends on him returning to the 93-94MPH fastball velocity he flashed last season. I see Manaea as being a lot like C.C. Sabathia, with the question being “Sabathia at what age?” Like Sabathia, Manaea complements his fastball with an excellent changeup and slider combination, the ability to dominate LH batters, and if you look at his post All-Star break numbers in 2016 you see a pitcher capable of walking 2 batters per 9 IP.

Sabathia, when he threw mid-90s, was a legitimate #1 SP. Now he has lost a tick or two and is more like a #4 SP. I see Manaea in a similar vein: if he regains his old velocity I believe he can be a true FOTR pitcher, as he was last July, August, and September. But if not, he is going to have to figure out how to make a lackluster fastball work for him and he will stall in the middle/back of the rotation.

So how should we view Manaea at this point? For now, something in between, which is for Manaea to rebound in 2018 throwing 92-93MPH and to lead the rotation but more as a #2 SP. I don’t know that we can count on Manaea to be that ace, but he has a chance to be their best SP.

I always thought it was a stretch to look at Kendall Graveman as a true “front of the rotation” SP, although when he came out throwing 95-97MPH this season, with results to match, it was hard not to. Thing is, Graveman has yet to do two things at once: throw that hard, and stay healthy. So it’s difficult to say whether that velocity is sustainable; what’s easier to say is that if his shoulder barks a third time, he may be in real trouble.

What is real, though, is that Graveman brings to the table a heavy sinker, a good cutter, and a lot of strikes. While his profile (a lot of innings, a fair amount of hits, not a lot of walks, not a lot of Ks, gives up some runs but usually gives you a chance to win) is more that of a #4 SP, I think there’s enough there to slot Graveman in as a #3 SP going forward. That may be ambitious, but I think it’s fair – especially if Graveman can stay healthy throwing 93MPH or better.

As much as I like Cotton, and I do, I can see where hoping he will land as a #2 SP, or even probably a #3 SP, is a bit optimistic. For one thing, Cotton flat out gives up too many HRs and that problem likely isn’t going away any time soon. The other problem, though, is that Cotton’s command is not razor sharp, in contrast to some HR-prone pitchers like Danny Haren who pounded the corners of the strike zone and surrendered their share of solo HRs but not much more.

Cotton’s fastball has ample velocity but lacks movement, and gets hit more than you would like. The one way I could see him making a quantum leap is if he lowered his arm slot a bit, got added movement, and found better command from that different arm slot.

Trouble is, Cotton may rely on his current release point to get the feel and action on his changeup and that’s his bread and butter. So odds are that Cotton, to some extent, “is what he is,” just with the potential to become a better version of it. That still leaves him probably as a #4 SP, which is a valuable pitcher but not quite that “front-middle” of the rotation guy you might get from someone who throws 94MPH and has a plus changeup.

Speaking of HR prone. Yikes. To me, Daniel Gossett’s strength is that he really knows how to pitch, reads hitters – but the stuff to make all that work isn’t quite there. As a result, Gossett has to be near perfect in executing his excellent plan and from what I’ve seen so far you can expect him not to be near perfect most of the time.

I like Gossett, but in terms of handling good big league hitters he’s a bit of a “boy among men” and as we saw with Tommy Milone, when your margin for error is razor thin you had better not make very many mistakes or you will be quickly exposed.

Unfortunately, Gossett doesn’t appear to have the gift of rarely missing location and I think that while he has a chance to crack the A’s rotation in 2018 it is likely as a #5 SP riding the Oakland-Nashville shuttle. I’m not sure he’s going to emerge as a “keeper,” though he may well emerge as a “useful piece” in a 162-game season.

Speaking of guys who know how to pitch…You have to like the story of what Paul Blackburn has done in his first major league trial (3-1, 3.22 ERA). He clearly knows what he’s doing and the ground ball rate is impressive.

That being said, while I tend not to get too bogged down on metrics you cannot ignore a K rate as alarmingly low as Blackburn’s 3.37/9IP. Why? Because pitchers with K rates that low simply do not sustain success in the big leagues. Ever.

Don’t get me wrong: low K rates are fine for a back of the rotation SP. It’s just that there are low K rates, and there are low K rates. You can succeed only striking out 6 batters per 9 IP. But Blackburn would have to “really up his game” just to get his K rate to 5/9IP – which he might be able to do, but even that portends almost certain doom long term.

Blackburn profiles to me as a great “Oakland-Nashville shuttle” guy but not, at this point, as someone you would pencil in every 5 days in the big leagues.

Daniel Mengden has good raw stuff, but so far has not shown he can really consistently command any of his pitches. He now adds to that barrier another speed bump, which is that he could not stay healthy this season. 2017 was a lost season (foot surgery, then rib stress reaction), meaning next season will be, for Mengden, kind of what this season has been for Mark Canha. Fortunately, Mengden is still young (24), but he risks getting passed up quickly on the depth chart by the likes of Grant Holmes, A.J. Puk, and Heath Fillmyer, all now at AA.

For many reasons, not all of them mustache related (ok, most of them), I would love to see Mengden thrive and he definitely has good stuff to go with his reputed “bulldog attitude”. But more and more he is looking like one of those “what could have been…” stories. 2018 will be a critical year for Mengden, but right now I think he has too many strikes against him – and the batters he faces too few – for me to view him as more than a ‘wild card’ on the depth chart until further notice.

The A’s still view Frankie Montas as a starting pitcher and one of Montas’ goals this season is to develop a changeup he can throw consistently as a weapon. Montas is puzzling because a high 90s fastball and low 90s slider should not get hit as hard, and as far, as Montas has been hit in his big league cups of coffee.

Whether he is a SP or RP, whether his arsenal features two pitches or three, something has to give with his fastball/slider combination to keep balls off the barrel of so many hitters’ bats.

I don’t know which way Montas’ career will go, but I have to think that his best chance at success will come in 1-2 inning bursts and not over 6-7 IP where any one bad inning where he loses control or hitters get familiar with his offerings can derail his outing.

I hope to be proven wrong but I still see Montas ultimately as a RP – and unless he can command his pitches he is not assured of even being a good one (but enough about R. J. Alvarez). Hopefully he suddenly takes to the changeup like my Aunt Bertha to bourbon (whole other story), because as a SP Montas has at least the upside of the late Yordano Ventura.

Sometimes things are too good to be true, and that was the case with Chris Bassitt’s recovery from Tommy John surgery. He was way ahead of schedule right up until suddenly he experienced fatigue in a rehab game and he really has not been able to get it going since.

An off-season of rest, and a chance to reset, could do wonders for Bassitt and I wouldn’t be surprised if he leapfrogged (leaptfrog?) over the likes of Montas, Blackburn, and Gossett to push for a spot in the rotation out of spring training.

In some ways, Bassitt might be the A’s best candidate for someone to emerge and claim a spot in the middle of the rotation along side Manaea-Graveman-Cotton, where his stuff can play as high as a #3 SP.

If the A’s are able to put together a surprisingly good rotation in 2018, Bassitt is my ‘dark horse’ candidate to be a key reason why.

The bottom line? If you could plop an ace into this mix, everyone might slot in just right and you might have a rotation that could lead you into the heart of the wild card race. Unfortunately, barring a surprise free agent signing or trade (neither expected), that ace is not arriving before 2019, when any of A.J. Puk, Grant Holmes, or James Kaprielian could be candidates.

Then again, 2013 brought Scott Kazmir from the Sugar Land Skeeters and 2016 brought Rich Hill from a career of erratic mediocrity. Until that pitcher surfaces, though, I see a rotation with a #2 SP (Manaea), #3 SP (Gravemen), #4 SP (Cotton), a few #5s (Gossett, Blackburn, Mengden), a reliever (Montas), and a true wild card (Bassitt).

What do you see?

Which assessment do you think is most ‘right on’?