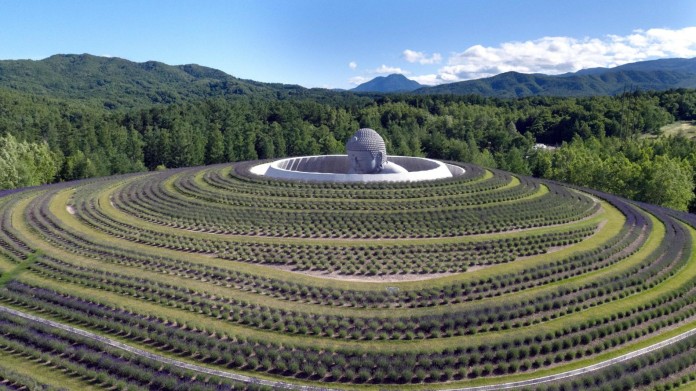 ight bursts into the dark room through a horizontal slit and an intersecting vertical line.
In the simple pews behind the mesmerizing cross-shaped glow, scores of visitors snap pictures on their phones of the concrete installation.
They are inside a life-sized replica of the Church of the Light, the famous Osaka chapel by Japanese architect Tadao Ando, which perfectly demonstrates his signature manipulation of the relationship between concrete, space and light.
Inside, its solemnity is breathtaking. Carving a cruciform into a reinforced concrete wall evokes such a pure feeling of spirituality it seems ludicrous it hadn’t been done before 1989.
Church of the Light, Osaka Credit: Tadao Ando
But that’s the beauty of an Ando design. “(My work) seems like something which anyone can make,” he tells CNN. “But (nobody) else can make it. It is my architecture.”
The National Arts Center Tokyo has erected the structure on its terrace for its huge retrospective of Ando life’s work that runs until December 18.
The Pulitzer Foundation for the Arts, in St Louis, United States — a classic Tadao Ando building. Credit: View Pictures/UIG via Getty Images
In English, the show is called “Endeavors,” but in Japanese, the name translates more accurately as “Challenge” — a title that speaks not only to Ando’s personal struggles but also to the inherent problem of exhibiting the work of an architect.
The installation is a powerful reply to that problem, but Ando says the real point of the exhibition is to inspire people to “go and see the real ones.”

Ando is a household name in Japan, and his celebrity is expected to attract 150,000 visitors to the exhibition, many from beyond the architecture world.
Tadao Ando in 1999. Credit: Heike Niemeier/ullstein bild via Getty Images
“Everybody can enjoy Ando’s work,” says Yayoi Motohashi, curator of “Endeavors.” “And his biography is really encouraging. He didn’t have enough money to get an education. He did everything himself.”
Ando’s unlikely rise from obscurity to design some of the world’s most iconic buildings for its richest people is something of an urban legend.
Tado Ando’s Church on the Water. Credit: CNN
The self-taught Japanese architect was born in 1941 the eldest of twin boys, who were separated in their infancy. Ando went to live with his grandmother, who nurtured in him a talent for craftsmanship.
His younger years had no trace of great promise: he worked briefly as a professional boxer and a lorry driver, before aged 24 boarding a Siberian train to Europe “to see the world.”
Swiss-born French architect Charles Edouard Jeanneret, aka Le Corbusier, was a major influence on Ando. Credit: Felix Man/Hulton Archive/Getty Images
Great buildings caught his eye, in particular, the works of Le Corbusier — the Swiss-French Purist whose concrete designs later inspired Ando’s own. The Japanese architect famously named his pet dog Corbusier.
After he sailed back to his native of Osaka, without a degree or having trained with a master, Ando got his architecture license and starting designing buildings.
Back then, he was known as the “urban guerrilla” architect.
From tiny homes with gaping internal courtyards to sprawling housing complexes, and then churches that seemed as much a hymn to his own style as to the spiritual realm, by 1995 Ando’s concrete vision had conquered the architectural world, and he was awarded its highest accolade: the Pritzker Prize.
Tadao Ando is awarded the Pritzker Architecture Prize in Versailles on May 22, 1995. Credit: PASCAL GUYOT/AFP/AFP/Getty Images
“His life and his works inspire,” says Motohashi. “That’s why this exhibition is called ‘Endeavors.’ People in Japan don’t try to do big things, they don’t want to make a mistake or have a really huge dream.
“That’s the message to society: Be free to strike out.”

Ando made his breakthrough in 1976 with a windowless reinforced concrete home.
Slotted between three traditional Japanese houses, the Row House in Sumiyoshi is a reclusive stronghold fed natural light only by its interior courtyard. It challenged conventional ideas of the home, and won Ando an award from the Japan Association of Architecture, but was it comfortable to inhabit?
The Row House in Sumiyoshi. Credit: Tadao Ando
The current owner, who has lived there for 35 years, says: “While feeling the seasonal changes on my skin (in) the courtyard every day, sometimes I resent this house. Sometimes I get excited about living here, and sometimes this house challenges me … (but) I have never become bored of all the experiences.”
Sometimes I resent this house. Sometimes I get excited about living here, and sometimes this house challenges me.
Owner of the Row House, in Sumiyoshi
Interviews with residents of Ando homes willing to sacrifice some comfort to be closer to nature, for greater privacy, to be challenged by design, are peppered throughout the hall of the show dedicated to a wide spectrum of the architect’s residential projects, from humble early homes to the sprawling Rokko Housing complex in Kobe.
“Even though Tadao Ando does huge projects, he still believes that houses are the fundamental part of his work,” explains Motohashi. She adds that Ando — who was heavily involved in shaping the exhibition — wanted to stress that architecture is the product of a relationship between a client, construction firm and architect, and that the “architect is not the greatest” party in that alliance.
Shanghai’s Poly Grand Theater, completed by Ando in 2017. Credit: Tadao Ando
Ando’s reputation grew throughout the 1980s, and by the early ’90s well-known figures were seeking out his talents. In 1992, the Benetton fashion family enlisted him to design their Invisible House, near Venice, a concrete home sunk 13 feet below ground for privacy.
Elsewhere, Ando was experimenting with windows and embracing nature. The 4×4 House in Kobe is located on a coastline suffering from severe erosion. Planning permission had been granted on a “postage stamp-sized” piece of land, and on it, Ando built a four-story tower with an almost entirely glass facade that optimized views of the Seto Inland Sea but left the structure exposed to the elements.
The 4×4 house in Kobe. Credit: Tadao Ando
“Ando told me that it would be tough when a typhoon comes,” says the owner of 4×4. “Certainly, I don’t feel (safe) when a typhoon is close. However, since I got used to it, I enjoy living in this house. (It) is not susceptible to fashion, and has a richness I would not change … This will be the place where I will live till the end of my life.”

No man is an island, but some men can transform one.
In the mid-1980s, Ando was part of an extraordinary project on Naoshima island, which was experiencing population decline as the Mitsubishi metals processing plant that its economy relied on slowed down. Japanese billionaire Soichiro Fukutake, of the Benesse Corporation, had the vision to turn the island into a cultural hub, and commissioned Ando to design the Benesse House Museum. The art gallery was partially buried into the earth, as had become an Ando trademark, and artists were invited to make works for this unique location.
1/10 – Artchitecture on Naoshima
Visitors to the “Endeavors” exhibition inspect the giant model of Naoshima island. Credit: Tadao Ando
It sparked a trend. In the following decade, Ando built six more public buildings there, abandoned homes were turned into guesthouses, Japanese artist Yayoi Kusama famously installed one of her polka dot pumpkins at the end of a pier, and Naoshima’s triennial arts festival now brings about 800,000 tourists to the island each year.
Google
Artchitecture transformed Naoshima’s fate.
A giant illuminated model of the island is the centerpiece of the exhibition’s central hall, a vast, light-bathed space showcasing the big projects of Ando’s 50-year career.
One of these works is the Hill of the Buddha: A 13.5 meter-tall sculpture which had been erected in Sapporo, Hokkaido, 15 years before Ando arrived. His brief was to build something that would draw attention to the religious sculpture.
So he buried it. Today, the Buddha sits inside a manmade concrete hill covered in lavender, the top of its head just visible. The Buddha is accessible to visitors through a 40-meter tunnel. A time-lapse of its creation is projected onto a white wall, transfixing visitors.
Other areas of the main space are dedicated to Ando’s foray into updating existing structures. In 2009, he inserted geometric forms inside the Punta Della Dogana in Venice, to transform the 15th century building into an art museum at the behest of French luxury goods tycoon François Pinault.
The Punta Della Dogana had lain empty for three decades before Tadao Ando regenerated it. Credit: Tadao Ando
Today, it houses François Pinault’s modern art collection. Credit: FANTHOMMEhttps://wowplus.net/morning-teaser-best-friends-wife-carrying-baby-nnamdi-serious-dilemma-got-best-friends-wife-pregnant-baby-due-not-know-confes/ Hubert/Paris Match Archive/Paris Match via Getty Images
And there is also room in this great hall of success to talk about failure.
Pictures of his rejected 1995 proposal for the Tate Modern in London reveal an ethereal idea to suspend a glass rectangle from the original redbrick Bankside Power Station. His unrealized 1989 plan for Osaka Public Hall, meanwhile, would have inserted an egg-shaped room into the middle of the neo-renaissance structure, perhaps an idea ahead of its time.
You should respect old people, you should respect old buildings. At the same time, you should look to the future.
Tadao Ando, architect
It is a recurring theme that when Ando encounters an existing architecture, he builds around it or within it, but never takes away from the original.
He explains: “You should respect old people, you should respect old buildings.
“At the same time, you should look to the future.”

Ando is now 76 years old, but his endeavors and challenges are not over. In 2012, he developed aggressive cancer and had to have several of his organs removed. He recovered from the illness and appears in good shape.
Earlier this year, he announced a 108 million euro ($121 million) plan, also financed by Pinault, to insert a giant concrete cylinder into a 19th century, domed structure that was once home to the Parisian Stock Exchange. It will house some of Pinault’s private art collection.
Japanese architect Tadao Ando. Credit: ALBERTO PIZZOLI/AFP/AFP/Getty Images
And, of course, Ando has just launched the biggest ever celebration of his own work.
Signing autographs for those buying “Endeavors” the book in the gallery gift shop, Ando seems in good spirits — something we had been warned isn’t always the case. He is wrapping up when a final fan approaches, a tall Caucasian man wearing tight black jeans.
He introduces himself to Ando. “Hello, I’m Paul Smith,” he says.
“The Paul Smith?” my translator asks me. “The Paul Smith,” he replies to us.
Ando becomes alert. The renowned British fashion designer is at his exhibition, and queuing for an autograph.
As the luminaries swap business cards, Ando teases him: “I already have a job.”
After Smith leaves, Ando turns to us, flamboyance tingling through him, eye contact truly being made for the first time.
“In 40 years, I have never once marketed myself,” he declares proudly, puffing his chest forward, a little smile dancing around his lips.
“​Tom Ford. Karl Lagerfeld,” he says, listing the designers he’s created homes for. “They all come to me.”
And that’s it. His people lean in to whisk him away, and Tadao Ando departs from the retrospective of his life’s work looking like a very satisfied man.