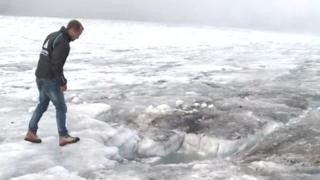 A shrinking glacier in Switzerland has revealed two frozen bodies believed to be of a couple who went missing 75 years ago, Swiss media report.

Marcelin and Francine Dumoulin disappeared at a height of 2,600m (8,530ft) after going to tend to their cows in the Alps in August 1942.

They were farmers whose seven children never gave up hope of finding them.

Their youngest daughter, 79, said she was now planning to give her parents the funeral they deserved.

Mr and Mrs Dumoulin were never found despite extensive searches.

“I can say that after 75 years of waiting this news gives me a deep sense of calm.”

A DNA test will be conducted in several days’ time, police say.

Local police said the bodies were discovered last week on Tsanfleuron glacier, above the Les Diablerets resort, by a worker from ski-lift company, Glacier 3000.

Director Bernhard Tschannen said his employee found some backpacks, tin bowls and a glass bottle, as well as male and female shoes, and part of a body under the ice.

Valais police said in a statement that a book, a backpack and a watch had been taken to Lausanne for forensic analysis.

Mr Tschannen said that it was likely the couple had fallen into a crevasse and the way they were dressed implied that they could have been there for 70 or 80 years.

“The bodies were lying near each other. It was a man and a woman wearing clothing dating from the period of World War Two,” he told Le Matin.

Ms Udry-Dumoulin said her mother, a teacher, rarely went on such walks with her husband, a shoemaker, because she spent much of her adult life pregnant and it was difficult terrain.

She said that she had never given up hoping that one day she would find her parents, even climbing the glacier three times to look for them.

Within two months of the disappearance of her parents, she and her siblings were placed with different families, and lost contact over the years.

She told Le Matin that she wanted to hold a long-awaited funeral, but would not wear black.

“I think that white would be more appropriate. It represents hope, which I never lost,” she said.

The bodies of a number of missing climbers have been discovered in the Alps in recent years.

Climatologists say a rise in global temperatures is causing the ice to recede, revealing the corpses of those missing for decades.