Street wall to Trump: No wars in trading. And lay off Amazon 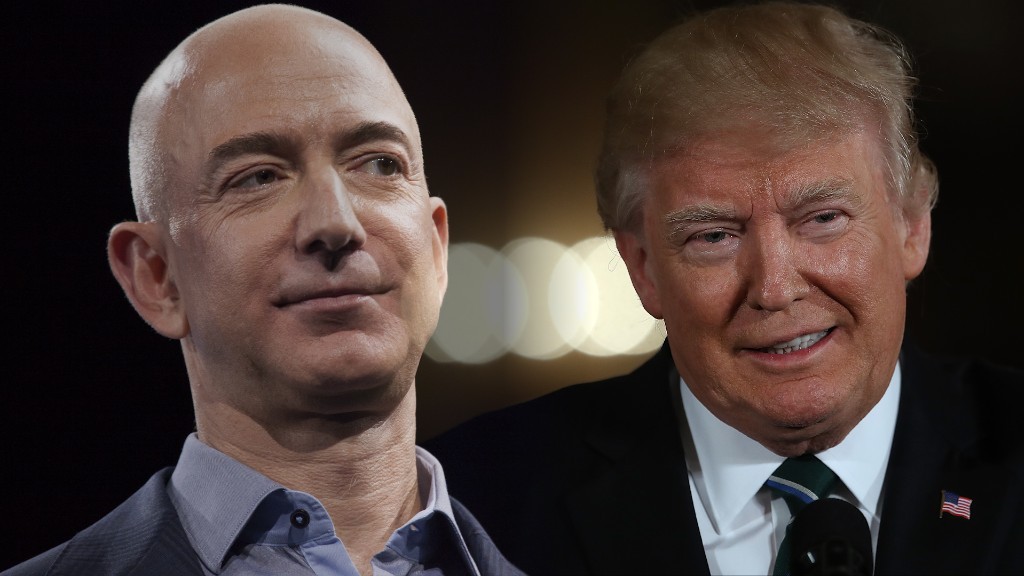 Street  wall to Trump: No wars in trading. And lay off Amazon

Wall Street is sending President Trump a message: Don’t start a trade war. And lay off Amazon, one of the most important companies in America.

The president played a starring role in last year’s stock market boom. Now he’s getting the blame as Wall Street hits the skids.

Trump’s fingerprints were all over Monday’s market sell-off. The Dow fell 459 points and the Nasdaq plunged almost 3%. The stock slump also spread to Asia, with benchmark indexes in Tokyo, Hong Kong and Shanghai all declining about 1% on Tuesday morning.

Trump’s repeated and vociferous attacks on Amazon (AMZN) unnerved investors because they raise the specter of regulation — without any clues about what Trump wants.

“Calling out Amazon without offering any type of prescription is what’s concerning the market,” said Erin Browne, head of asset allocation at UBS Asset Management.

Amazon has lost $60 billion in market value since Axios first reported Trump is “obsessed” with the company on March 28.

Since then, Trump has repeatedly suggested Amazon takes advantage of the US Postal Service and doesn’t pay its fair share of tax.

In fact, Amazon pays the same lower rate that the post office charges other bulk shippers, and it collects sales tax in every state that charges it. Amazon does not collect sales tax on purchases made from third-party vendors.

Trump has a long-held grudge against Amazon CEO Jeff Bezos, who also owns The Washington Post — a paper whose aggressive coverage of the administration has drawn the president’s wrath.

“Any time Trump, or any president, starts interfering in corporate behavior, that is concerning for the market,” Browne said.

It’s a role reversal for Trump, whose corporate tax cuts and deregulation helped send stocks soaring after the 2016 election. The Dow spiked more than 8,000 points between Trump’s election and late January of this year. It’s down about 3,000 points since then.

Investors are still struggling to get used to Trump’s unconventional style, which creates a great deal of uncertainty for markets.

“In the past, presidents have taken issues with certain sectors through more formal channels, as opposed to off-the-cuff on Twitter,” Browne said.

About $36 billion of Amazon’s market value vanished on Monday alone. Those losses are felt widely because Amazon’s enormous success has made it one of the most popular stocks in the world. In fact, Amazon has been a big driver of the stock market rally.

“For the President to criticize a company the way he has with Amazon, which is clearly the result of a personal grudge with the CEO, runs counter to the concept of a ‘free’ market,” Ian Winer, head of equities at Wedbush Securities, said in an email.

Trade, an issue that Trump put front and center this year, is one of the market’s other big headaches.

Trump’s love for tariffs, first on steel and aluminum imports and soon on China, has forced Wall Street to contemplate what was once unthinkable: a trade war that slows global economic growth. Worries about protectionism have repeatedly knocked stocks down in recent weeks.

Stocks slumped again on Monday after China showed it’s willing to back up its words with action.

Carrying out a threat it made last month, China responded to Trump’s steel and aluminum tariffs with $3 billion of tariffs of its own. Beijing has yet to retaliate to Trump’s promised crackdown on Chinese intellectual property theft.

And then there’s NAFTA. Trump has repeatedly threatened to rip up the trade agreement with Canada and Mexico, which is deeply embedded in the American economy. Trump on Sunday linked NAFTA to his efforts to build a wall along the border with Mexico.

“They must stop the big drug and people flows, or I will stop their cash cow, NAFTA. NEED WALL!” Trump tweeted.

The good news is that some analysts believe Trump is trying to force a deal, not start a trade war or tear up NAFTA.

“The president thinks threats against the top two US trading partners will hasten a conclusion to discussions in a decidedly favorable manner,” Kim Wallace, managing director at the Eurasia Group, wrote in a report on Monday.

“The market is worried about the level of uncertainty Trump has injected into trade negotiations,” Browne said.